It's kind of odd really. I'm a European, who has spent 12 years running constantly around Europe at strange angles, and who has never been on a airplane in his life, and yet my first taste of Portuguese life is....Macau.

I'm not somebody that counts countries religiously, or tries to keep adding to my list like some kind of game, but I admit that it's long irked me that i somehow haven't yet made it to Portugal. I've been to every other mainland country at least 2 or 3 times (most many, may times), and covered huge tracts of other countries as well. Just never made it to Portugal. So there was no way in hell i was going to turn down the chance of a trip to Macau as I was that close.

Hong Kong has been strange in that it all feels oddly familiar to Britain. And despite never having been to Portugal, Macau also feels oddly familar and comforting. Asia's first European colony (i think) has a very definite Mediterranean feel to it, and parts of this small outpost could just as easily have been in Spain or Italy. Or, i'm assuming, Portugal.

It's also kind of odd that in going from Hong Kong to Macau, you never leave China, yet get both exit and entry stamps on your passport, neither of which are anything to do with the Chinese. Two SAR's - Special Administrative Regions - who essentially haven't changed since reverting to Chinese rule in the late 1990's (after some 400 odd years), and beaurocracy and international relations are a wonderful thing.

Five of us went over. An Australian-Chinese guy, Lun, who happened to be in my hostel joined myself, Jude (my host back in Muroran in Japan, shortly after the Kiki incident) and the wonderful Kevin and Solene. For those who can't be arsed to remember them, they are my trip stalkers who have chased me across Russia, met randomly on several occassions in Japan (including at Jude's house) and know many of the same hosts, and even ended up in Shanghai at the same time a I did. And then again in Hong Kong, slightly more deliberately.

Macau is an interesting dot on the map, and I was instantly captivated by the sudden change in life. I've always loved the semi chaotic look and feel of some of the great Mediterranean cities (Naples is a prime example), and Macau was just like that. Some dodgy looking appartment buildings, with washing hung across the road, old people resting on street corners or chatting across balconies, and the constant background hum of life noise, interspersed with some lovely squares and wonderful old architecture. And of course, casino's. Macau is a gamblers heaven, with 14 large casino's accounting for over half of the cities (or country) income. It has it's own currency, the Pataca, but also freely accepts Hong Kong dollars (at a slightly advanatageous rate to them, naturally) everywhere, and has 24hour jetfoil and helicopter transfres to Hong Kong just to ensure that the gamblers can always arrive (and been kicked out after the have lost everything).

Within 20 minutes or so of arrivng, i had already decided that i'd love to live here for 6 months - a year, i like it that much. Unfortunately, i'd only come for a day trip, so didn't have time to see as much as i'd wanted, but the public transport seemed to make up for that. The bus system is impressive in it's scope, but because Macau is so small, the systmes designers seem to have decided that every bus route should go down every strete in the damned country. Meaning that what you would expect to be a 10minute dash, could turn into a 40minute sightseeing tour, or visit to the Chinese border. 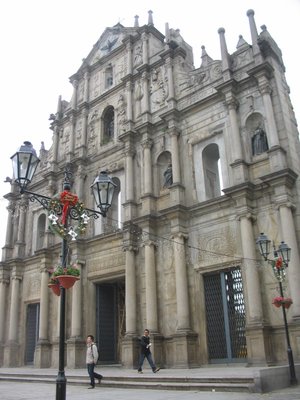 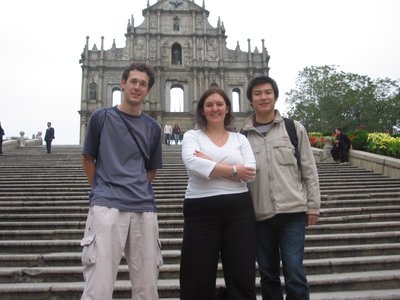 Spent most of the time being a wide eyed tourist. The Ruins of Sao Paolo Church are probably Macau's most famous old site (burnt to a inder in 1835, i do believe, excepting the front wall) and we started here, before taking in the Monte Fort - complete with bus stop in the centre of the fort at the top of a large staircase. A tad optimistic, me thinks - the Temple of Kun Lam, Av de Conselheiro Ferreira de Almeida (main drag, with an area of exquisit if restored old houses and government buildings), Guia Lighthouse and Fortress (call me daft, but i would have thought that building the lighthouse near the shore, as opposed to on the mountain 1km inland might have helped not mislead sailors. Then again, if people get shipwrecked, i suppose they have nothing else to do but visit the casinos), the Leal Senado Square in the heart of the city, and a walk through some of the old colonial streets down to Barra Hill on the souternmost tip of the peninsula to look out over the Macau Tower and nearby Taipa and Coloane islands, Macau's other constituent parts. 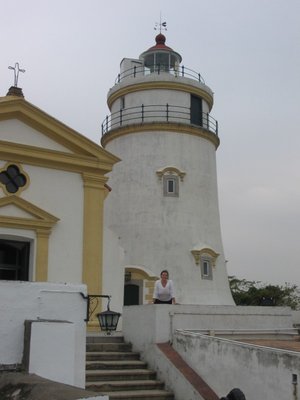 We also couldn't resist the opportunity to visit a brand new development near the ferry terminal. We had seen it coming in, and curiosity got the better of us. Eevntually, we think it will be a kind of theme park and shopping complex, but at the moment it isn't complete so includes only a Chinese fortress and Temple, Roman ampitheatre, Street of Dutch style houses, extracts from Stratford upon Avon, New Orleans and Ulm amongst others, a volcano and few extra bits and pieces such as an Egyptian styled conference centre. Most bizarre. 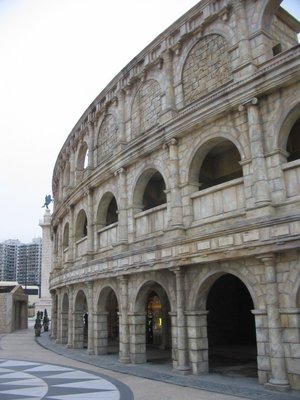 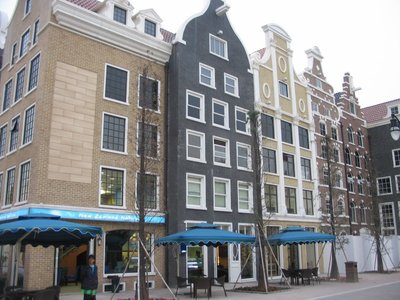 I'd love to say that we gambled the night away in Casino's making huge sums of money, but i'm ashamed to say that for different reasons, none of us even entered one. My (semi legitimate) reason being that i didn't want to push my luck after the previous nights gambling successes. Your now wondering what the fr1ggin heck i'm going on about, but as i'm not writting about this in entirely chronological order (timelines? Pah! Who needs them?!), you'll just have to wait. 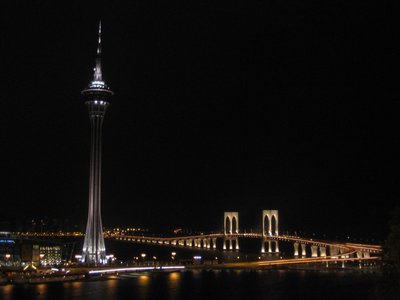 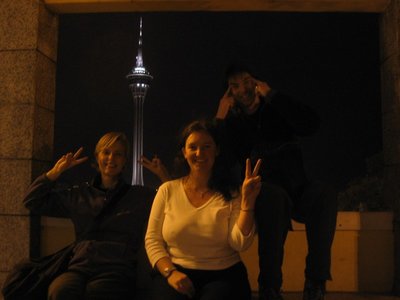 The Macau Tower, and Jude with my stalkers Solene and Kevin