Stop the clock. They finally actually got married. Sort of.

In the circumstances, i really don't feel like doing a long interesting or waffly entry, so your just going to have to live with it.

Strangely enough, I didn't bother going to Germany v Sweden. You can probably work out why. I spent a couple of days wandering around kind of dazedly whilst i let things soak in and my head accept them. I got involved in a chunk of the organisation etc, which helped keep me vaguely sane, and with other people definitely in a much worse way, spent time looking after them. But after a couple of days, i realised that I needed a bit of time, and had a few other things I needed to attend to, so left for a few days.

As previously envisaged, I headed through to Slovenia (spending 7hours on a sweltering train in 35+ heat and with the air con packing in after 20mins), and spent a couple of days staying with my old friends Miha and Katja, who I'd also stayed with at the beginning of my trip. It was good to see them again, but also to be elsewhere and away from the grief and events in Germany. I could just switch off a bit and get my bearings. And I really needed it. From there, it was through to Zagreb. 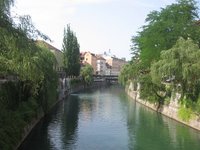 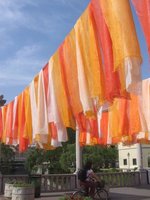 Timings were of course perfect, but it was finally the much delayed wedding. 6 times, I believe. The wedding. The one I had been really dreading. Level of detail here will necessarily remain low. I had been dreading it for a while. But I may have already mentioned that. There were many complications. I was best man (yes, the day before the funeral) so had to be cheery and alive at least somewhat, although I had managed to arrange to only stay for only 1 of the 3 days of the actual wedding, so that i could return to Germany for the funeral. Whilst this will sound horrible, I'm delighted that I managed to escape. Amazingly, my best man speech went off reasonably well. That sounds not too hard, but when you consider that i had to talk for about 90mins with several toasts, to a room full of people that i didn't know (baring the bride and groom, i had only met 4 others before, and 3 of them only briefly) in a language that i speak maybe a dozen words of, it was a great achievement. Sadly, the rest of the wedding was farcial.

I've been at strange weddings before. Ones which never happened, due to somebody, erm, pulling out. Ones where there have been, shall we say, occasional differences of opinion between people. But nothing to even vaguely compare with this. The kids, amazingly, were brilliant (4 month old twins). The groom even managed to stay mostly sober (a recovering alcoholic). However, there were several fights and confrontations. Knives were pulled. Things were destroyed. There were screams, and tears from many. And the police arrived on THREE separate occasions, two of which they departed with a handful of people to spend time at the pleasure of whoever they spend the pleasure of in Croatia. I suppose the Croatian taxpayer. It was utter chaos. And of course, i have barely any idea what the fr1cking hell was going on most of the time, as translating stuff for the poor sole non Serbo-Croat speaker in the room wasn't a high priority. I don*t even know what some of the arrests were about (or rather, i do, but can*t work out why certain other individuals weren't arrested instead of what seemed to be mostly innocent bystanders on the second occasion). And somewhere in the middle of it all, they even actually got married. Wow. And it was with great delight that i gave my congratulations, apologies for having to leave and legged it out onto the night train back to Bavaria.

If Kiki had been involved somewhere, I really wouldn't be surprised.

Sadly, none of the photos I have of the wedding are usable on a family website, although I will endeavour to get, at the very least, a nice Bride & groom and kids picture for you all to go 'awwwww' to...

The funeral was very fitting, and a good send off to two very close friends. Another chapter in life is over. And I can feel the end of my journey must be soon. It just feels right, even though i have time and money still available.
My original plan was to hang around for a day or two after the funeral, but it became very clear that the family wanted some time alone, so Aldo and I headed back to his place in Liechtenstein to ponder things in general. We were a somewhat morose duo, sitting there reminiscing about the past. The original group of 5 is now down to the remaining duo and we can*t help wonder which of us will be next. And the sheer number of people in general from our large group no longer with us is really scary. Am I (are we?) cursed? Is it just life? Sh1t happens? Karma from a previous existence, or...? Oh well.

What I do know is that between we got through a really scary amount of whiskey that evening, and certainly more than 2 people should be able to get through. 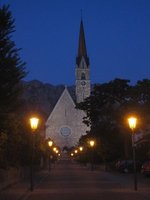 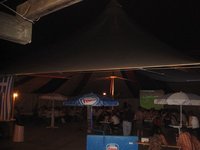 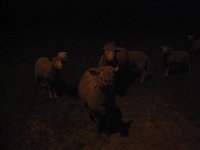 Schaan church at night, the huge outdoors tent they had erected for the World Cup, watching France v Brazil, and don't ask about what a depressed Welshman is doing with a 4am picture of sheep. Sometimes, you just need companionship that you can truly trust.

The only other thing of note that happened that night, was that thankfully the English finally went out of the World cup. I don*t have a huge problem with the English, but even them getting to the semis you know that you would never hear the end of it. And i can*t stand the media portrayals and hype. But the thing that really made it memorable was think was something that I had forgotten. Despite the tiny population of the country, there is an amazingly large (and that i always forget) Portuguese minority here, who went absolutely nuts on victory. You can't believe how much noise a couple of hundred cars full of Portuguese celebrating can really make. If that's what they are like after barely winning a quarter, I really need to be in Portugal (or indeed Germany, Italy or France) after the final for the winning celebrations.

And so it was, that I awoke in Liechtenstein, slightly the worse the wear shall we say, in a strange frame of tranquility, and knowing there and then that my trip was over. It was time to think about reentering the productive world. Sort of. 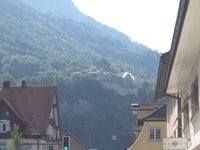 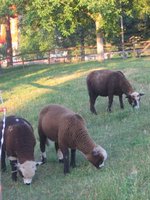 Vaduz Castle, somewhat hungover, and a sight for sore eyes

Rich, you have an amazing life.

I'm very sorry about your friend. I hope everyone can find some peace at the end of the tunnel.