Which idiot let the entire Swedish population in?

A Blue gold invasion of Berlin

It's amazing just how many Swedish people it's possible to fit into Berlin at any one time. Granted they were going to be playing in the city that very evening, but the numbers were just scary. Two people with a large van full of copies of Aftonbladet (A Swedish tabloid) had driven over to sell their paper and sold out in under an hour. What had started as a decent sprinkling around during Brazil v Croatia had evolved into a full scale invasion of blue and yellow, and with me sporting my large Swedish flag as a kind of cape (as, indeed, I had at the Tunisia v Saudi game and on the train) I certainly wasn't letting the side down. The question was whether the Swedish side would.

I watched Ecuador - Costa Rica in the pub with Toby, one of the English guys who had also headed down to watch the Tunisia game, and in fact even had tickets for the Ecuador game in Hamburg (and his friend, Dan, had gone). Frustratingly for him, he had come down with a problem during the previous afternoon (his legs had swollen to huge red things) and was struggling to walk, so had reluctantly had to give up his ticket in order to visit a Berlin doctor. And with Ecuador being the early kick off, there was no chance of subsequently getting to Hamburg on time. Gutting. For those that have tried to get tickets, you will know what he went through and how hard it had been. To then actually get tickets, be in Germany and be unable to go is about as bad as it can be.

That was followed by another pub trip with some Aussie's to join the hoards of people cheering on the Trinidadians against the poms. Damned English. In fairness for them to loose would have been harsh, but they weren't exactly outstanding against a limited Trinidad side of mainly lower league British players. But they were superb and held on until the last 10mins when Crouch (who's beginning to look like a seriously prolific scorer, by stats at least) finally scored, before Gerrard got a late second.

And then to the main event and the hoards of blue and yellow. We headed again to Brandenberg Tor and the Fan Fest, which was simply a wash with Swedes. The only others out in any force were Aussies (with the exception of Sydney, has anybody ever come across anywhere where there isn't a large crowd of Aussies? It's scary just how omnipotent they are) who were also in yellow, and a scattering of English, many with Swedish partners. You couldn't have told that Paraguay were playing, as there were a total of 4 Paraguayans in a crowd of well over 100,000... The game itself was one of those extreme exercises in patience. The Swedes were on the offensive all game, but couldn't do much with it. Zlatan - long time superhero and saviour of the Swedish people - went off at half time injured, Allbäck somehow managed to have a lob cleared off the line, and with all hope beginning to fade and the entire crowd about to go into mourning, Freddy popped up with a late, late. late winner. 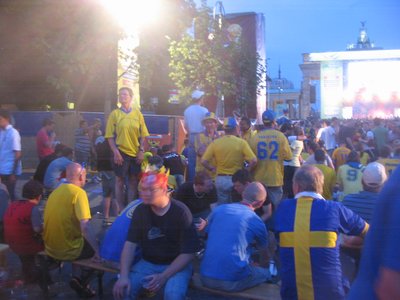 Queue absolute mayhem and a huge party all around. You would have thought that we had just won the World Cup. The evening went downhill rapidly from there, and ignoring the fact that the 3 Aussies I had started with had metamorphosed into 13 (just how do they do it?!) plus a fair few others - and amazingly considering the make up of the crowd, somehow not including a single Swede - the rest of the events of that evening will remain untold. And not entirely because I don't remember most of them. The fact we didn't make it home until gone 9am probably says something though...


The following day was, shall we say, somewhat unproductive. I achieved nothing at all except sitting outside of a kebab van watching football on TV. Movement wasn't going to happen. Plans to play football really weren't going to happen. And I was the active one - none of the Aussies even surfaced before 7pm. But it wasn't a bad day to be stuck there. Argentina gave a masterclass of possession football and attacking intent, demolishing Serbia - Montenegro 6-0, whilst also having a goal wrongly ruled out for offside, missing several good chances and scoring a fantastic goal, after a 3minute long 25pass (forward and back, left and right), and 9player build up. I've long thought the Argentinians have had the most depth - for the last 10 years or so - but curiously they have often failed to use it to it's potential. Admittedly teams that blow away their groups historically have peaked too early and then blow up in the knock outs, but there's always exceptions... The Dutch then beat the unlucky Ivorians 2-1 to send them out and mean my Cote d'Ivoire v Serbia -M game is irrelevant, except for pride and as S-M's last ever appearance together. The Ivorians again looked extremely good, and to my money would qualify from any other group, easily being amongst the top 5 teams. But unlucky enough to be in the hardest group.

That evening, I somehow managed to score tickets on the FIFA site for 2 more games - the Germany v Ecuador group decider and a tasty looking Ghana v USA. Typically after booking 5 nights in Berlin, only to then have to travel to Munich for a game, I will now be staying near Munich and have to travel to Berlin for a game (plus Nürnberg, which is easy). Oh well.

Left Berlin the following morning to Bavaria which is awash with yellow (Aussies of course, bolstered by a large Brazilian following for their game the following day). I have tickets for that, and now have 4 games in 5 days, but whether we manage to go to them all - or any - depends on a very important external factor.

Some of you know why, and I hope the rest will accept that I am deliberately leaving out details, but things are really not looking good down here, and I will probably now be in Bavaria for the duration. How long I'm here depends upon developments, but sadly we don't have much hope left. And because of that, i won't be around much for a bit as I have much more important things to do than be online. I'll update you when there is news, and hopefully will have some stories from Australia - Brazil et al as well, but your going to have to wait until I am in some kind of useful frame of mind to be able to put them together. If I ever am.

Sadly, and despite what Bill Shankly said, football isn't the most important thing in the world, even when it is the world cup. Life and death don't pay attention to TV schedules.

Posted by Gelli 05:40 Archived in Germany