The delights of an essentially irrelevant World Cup game

Some people might wonder why the heck I went out of my way to spend 60euros on a second level ticket to see a game between two Arabic nations that I have no particular affiliation with, in a city over 6hours away from where I was staying, and which I would then have to return to only 2 days later on anyway.

For the rest of you, it's obvious. It's the World Cup!

And thus it was that i crawled out of bed at an hour almost as unseemly as the one I first got into it (about 20mins previously) and with two (shudder) England fans also heading there, headed off onto the train to Munich. Spain were opening their campaign against the Ukraine in Leipzig that day, and as the train went via Leipzig, we were first treated to a train full of press, officials and Spanish and Ukrainian fans. I had the, erm, honour, of sitting opposite Martin Tyler (looking somewhat old, haggard and pissed off with the world, despite being paid to be there and report) and a couple of Aussie cameramen, who were replaced in Leipzig by a German newspaper reporter who didn't stop talking for the rest of the 5 or so hours - an hour's delay not helping - although as it was football stuff, I didn't really care.

After an interesting game of sardines, which in fairness was notable really only for watching the chaos - almost at Shanghai levels - of people trying to squeeze on to an empty train, we headed off into the German suburbs, with everybody else (mostly Brits and Germans) complaining about how cramped the train was, whilst I marvelled at how empty it was in comparison to Moscow or Tokyo rush hours... Munich's spanking new (ok, a year old) Allianz arenA really is spanking new, and stunning. Resembling a kind of, erm, dunno really, Maybe a large white alien craft?, it certainly doesn't look liker a traditional stadium. Entering was surprisingly easy, with no ID checks at all, although my water bottle didn't make it, and finding my seat was simple. I had ended up in the middle tier, right in the corner above the flag, with a great and unobstructed view. 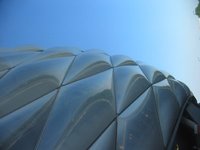 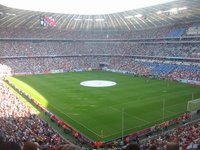 Oddly, and despite FIFA's later protestations that it was a 66,000 sell out, there were large chunks of empty seats. Many were in the side reserved for corporate sponsors, who, I'm guessing, being underwhelmed by the two teams on offer had decided not to bother, but were too arrogant to actually return the tickets for real fans to use, whilst even my row of 24 was half empty. It was also a very strange crowd. Of maybe 55,000 people actually there, probably no more than about 5,000 were actual patriotic fans. The rest of us were essentially random football fans (huge numbers of English, lots of Germans, sprinklings of virtually everything else) who had managed to get tickets and were there because it was the world cup. It was great fun, but a strange atmosphere as there was little of other partisan cheering and support that tends to heighten the atmosphere. 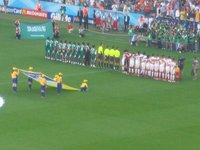 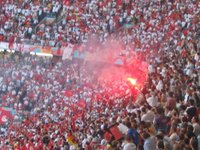 The teams line up before the game starts, and some of the Tunisian fans cheering on their team

The game itself was decent and entertaining without being amazing, although most of the crowd seemed more interested in starting Mexican waves than actually watching the game. Technique and talent seemed to be lacking a bit and it wasn't the most technically amazing game at all, although as there are few African-Asian competitive Arab matches, they certainly weren't taking it easy. The Tunisians went 1-0, and then 2-1 when the veteran Al Jaber, formerly of Wolves scored seconds after coming on with less than 10mins to play, before Raidi Jaidi of Bolton equalised right at the death. Both teams could have won it, but i thought a draw was fair. And with Ukraine (who I've bet on to reach the semi's, woe betide me on that showing) oddly capitulating against the Spanish earlier, a draw certainly gives both sides a decent chance to progress to the next round. 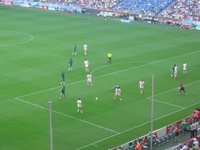 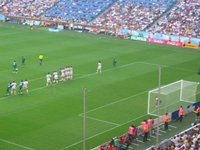 Action from the game 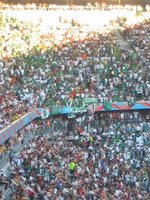 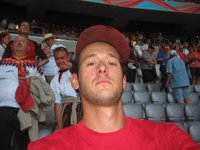 The Saudi fans cheering on their team after Jaber's goal, and Me at the end of the game in the emptying stadium


I watched most of Germany v Poland in the Station awaiting my night train back to Berlin, and was amazed to see some common sense and thinking being applied by DB, German railways. Not only were they putting on extra trains on the four core internal routes away from Munich (to Stuttgart and Frankfurt, Köln and the Ruhrgebeit, Hannover and Hamburg and Berlin) to help people to get home after the game, But they had delayed all night trains leaving by between 10 and 30mins until after the end of the German game to allow fans (and staff) to finish watching it. And as Germany didn't score the only goal until the 91st minute, that extra time was definitely needed... 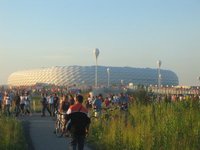 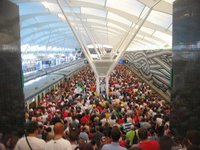 Crowds of fans leaving the game, and then heading into the U-Bahn station at Fröttmaning after the Tunisia v Saudi Arabia game

Posted by Gelli 05:39 Archived in Germany