University celebrations and calm before the home coming

Although very sad to be back in Europe and the trip definitely winding down, I was delighted to return to Lithuania. Vilnius has long been one of my favourite cities, and whilst it has started to be discovered more and more by backpackers (who more or less without exception have either come direct from Krakow or Warsaw and then heading to Riga and Tallinn, or are going the opposite direction) and stag do's etc, hasn't yet really taken off and been affected in the way that Riga has. Part of that is that Ryanair only fly to Kaunas, an hour away, and with Vilnius airport at capacity and not due expansion for a few years it should stay that way, and at least keep some of the stag-do horrors away.

The weather was beginning to get decent after a few dodgy days in Russia, and I was looking forward to seeing some friends again. With a few people away at summer camp, and others in the middle of exams or in the process of moving so unable to let me crash, i found myself an excellent (if bizarrely full of Aussie's) hostel in the centre and spent a couple of days wandering around happily, catching up with some friends and generally relaxing. Amongst others, I managed to spend some time with wonderful Vaida who i had met on my way through last time, and who after a very tough few weeks was in the middle of her final course commitments and about to finish, with, hopefully a pass from her Thesis presentation, which ends their course and after which they will know straight away whether they had passed or failed everything. Plus a few others who I knew from various places, and one or two commitments which I won't go into, which were necessary but sadly not the most fun.

Even though it isn't all that big, I never manage to have enough time in Vilnius. I think perhaps I just need to move here for a few months, which would be easier. And I can never tire of watching the girls wandering around, as they are almost to a fault all universally stunning.

In the middle of my time in Vilnius, I went to Kaunas for a couple of nights. Vilnius's second city is about 80minutes West of Vilnius, but despite passing through maybe 20times, I'd never managed to stop off for even a couple of hours to see it, and was determined to rectify the situation. Admittedly my timing was bad - the weather changed so that it was mostly wet or rainy, it was right in the middle of end of year (or course) exams so few people were about, and I arrived Sunday with only Monday as a full day there, which with most things being closed meant they were are the worst days possible. Oh well. But I had managed to find myself yet another (as they all have been) great host, in the shape of Ina - of the many Lithuanian girls with an Italian boyfriend - and we had a look around town. I also spent a day walking through the old town, and out to the convent by the lake, which despite the weather was very pleasant, and I'm more than happy to have finally managed to see Kaunas. 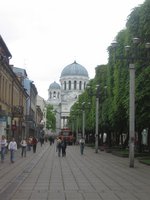 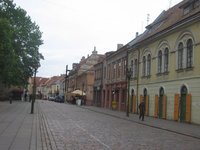 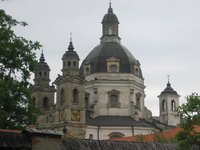 Central Kaunas, the old town, and covent by the lake


Ina also gave me a chunk of Lithuanian music to add to my growing collection of World Music, and introduced me to a hither unto unknown Italian liqueur, which whilst admittedly on the sweet side, had the totally unexpected quality of tasting more or less perfectly like liquid Bakewell Tart. I used to love Bakewell tarts (a kind of English pie/cake, originally from Bakewell in Derbyshire, for the many of you know wondering what the fr1ggin heck Bakewell tart is) and haven't seen or tasted one in many years, so was both stunned and delighted when the realisation of the taste hit me. I also had an extremely strange experience with 3 young-ish girls in a kebab shop (and another Uni celebration) which for your amusement I should probably expand greatly on, but in this case i really won't.

It's just better that way. 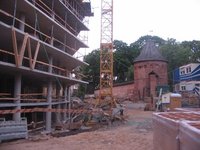 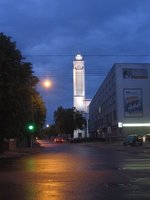 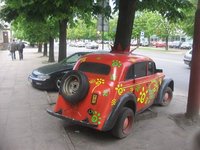 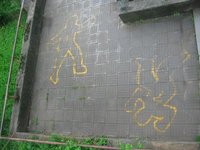 Progress is building new things right next to old buildings; Kaunas by night; art or really bad parking depending on your point of view, and proving just how safe Lithuania is!

Back in Vilnius it was midweek, so the hoards of English speakers there at weekends and the stag-do mob that do exist had all gone, leaving the city much quieter, more relaxed, and mostly composed of Lithuanians. WooHoo! Vai had had her Thesis presentation that morning with excellent results, and thus we celebrated both her graduation and imminent move to London to join her English boyfriend and start a new life there. Later and deliberately, if a bit more randomly, i hooked up with my old Norwegian friend Tina and one of her friends, who had just finished their exams in Trondheim and who had just flown in to start a well deserved summer holiday.

I've said it before, but I wish I could stay longer.

However, I had another semi-commitment to take care of, and so i took the bus to Klaipeda on the coast, and after wandering around for a couple of hours (the old centre is OK, but I've never liked the city in general), went to the port to get the ferry to Karlshamn and my return to Sweden. The ferry was boring, and I had very little of either Litas or Krona so restricted myself mostly to watching the water pass by. It was the calmest ferry I think i have ever been on, with not even a hint of rocking, and if i hadn't known i would never have guessed I was on a boat or moving. I watched Sweden appear the next morning, feeling very strange about my return, even if only a brief one, and after negotiating one slight problem (Karlshamn port is nowhere near Karlshamn, and there is no public transport to it) with the help of a couple of nice Lithuanian lorry drivers, we passed through Sölvesborg and the Swedish rock festival and I was dropped in Kristianstad.

I was finally back.

Why? I'll explain next time. 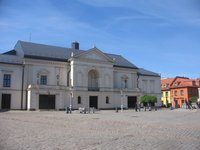 Posted by Gelli 05:35 Archived in Lithuania

I'm Spanish, I live in Seoul and I'm heading for Valdivostok from Sokchon, via Zarubino. I thought you may give me a hand.

Do you have any idea how to get from Zarubino to Vladivostok? How much it costs? And if one can pay with dollars/euros (in Korea they don't have any Rubles!)?

Thanks for your help. My email is mnegre@gmx.de
Mario