It's strange how little things suddenly mean so much. After about 11 months of being in countries with different alphabets or character sets, crossing back into Latvia suddenly meant I was back again in truly familiar ground. And even the EU. Things really are coming to an end with extreme speed.

I'd spent 3 days in Moscow, partly just because I had a little extra time after the Kazan cock-up, and because I managed to arrange my ticket to Riga that way. It was the last possible way that I could have been tripped up and forced to fly (in theory), and even then I had several alternatives.

In Moscow it was heartening to see 90% of people wearing the national costume (jeans, black shoes and leather jackets) and also the requisite number of beer drinkers. I have never worked out exactly why, but i think it must be mandated by law that at least 50% of all Russians must have an open can or bottle of beer in their hands at all times. This applies at any hour of the day or night, and in any situation, with the alleged exception of drivers. Despite having the vodka reputation (vodka generally gets drunk at home and for occasions), Russia is very much a beer country with huge availability and vast variety of Russian - and some foreign brands - most of which are very good. And it is also surprisingly rare with such numbers of constant drinkers to see very drunk people in the streets, which I still find interesting. And of course, the requisite number of Russian stunners out in the sunny weather.

I had arranged to be in Moscow for less than the 72required hours, so visa registration was not an issue, so instead of returning to a hostel I managed to find myself a lovely host at short notice, with the excellent Natasha happy to put me up (the moronic Winston Wu should take note). Unfortunately, poor girl, she is a lawyer at a big firm and works long hours. On my first evening when I went to meet her at 10pm after work, she told me that something had come up and as such she wouldn't be able to leave for another several hours. But brilliantly (and I love this about CS), she was more than happy to hand her keys and directions to me (a strange foreigner she had known about less than a week and had met for less than 5minutes) and told me to make myself at home.

I'm always wary - especially in places where I don't know the language, and with people I don't know at all - about being given keys for the first time, as partly I feel uncomfortable in strangers houses without them, but more that I always dread misreading/interpreting the directions and ending up trying to break into the wrong building, leading to long a long and unpleasant interrogation by the police whilst things are being sorted out. I.e. How long have you known this person? 5 Minutes. Where did you meet? Online What is her surname? No idea. And the like. But happily I managed to find me way through the hoard of tower blocks in Bratislavskaya in the SE corner of the city and got into the correct apartment without being attacked or even queried by eagle eyed Babushka's. It later turned out that poor Natasha appeared at about 5.30. And went back to work before 9am.

After sorting my ticket, i spent a couple of days just wandering randomly, something I love doing in big cities, revisiting a few old tourist spots and doing some chores and bits of shopping. I spent a huge amount of time (and later, money) in a huge toy shop, marvelling over it's size and the sheer variety of stuff available to kids these days - I'm sure it wasn't like that in my day - looking enviously at a life sized fury camel (if I could have afforded it, and also worked out how to get it back to anywhere useful by myself, i would have bought it) which would have almost made up for Erik's sad recent demise and bought a pile of stuff for my god kids and a few others. And picking up other such essentials as a huge wall world map in Russian

The middle day with another CSer, a Portuguese language student and translator (In Russia you go to Uni to do language, meaning it's English and something, but cant seemingly choose the something. Olga had been assigned to Portuguese, like it or not) heading on a day trip to Sergiev Posad. One of the Golden Ring cities, it is one of the most accessible from Moscow and somewhere I had planned to visit on my way East, but failed. In fairness, It wasn't the most exciting place in the end, and the reason for it's golden-ness - the Kremlin - whilst lovely, was half closed to visitors and partly under reconstruction, which didn't help. But we had a good wander, I happily ticked off somewhere that had long been nagging me and Olga was great company and good fun.

Arriving in Latvia was a little anti-climax. No problem at customs, and barely a glance at my strange pile of toys in assorted bags, and I was then back in the lands of cursory passport checks and no stamps. I've acquired a fair few stamps and visa's on this trip and will soon need a new passport. Indeed, the reason that I was coming to Latvia at all is that the direct trains from Moscow to Vilnius all go via Belarus, and I don''t have either a current Belarus visa in this passport or enough space to get a new one. Less than an hour after arriving in Riga, I was on a tram to the outskirts, and barely 5minutes later had managed to find a ride (with a lovely Lithuanian in a huge new BMW on his way home from Tallinn, who even insisted on buying me dinner on the way) all the way through to Vilnius. I'd been in Riga just long enough to post some toys, change a little money so i could buy food and a tram ticket, and then head to the outskirts.

It really is coming to an end now, but despite very strange feelings to be back in Europe (the foreboding of which started before I had left Thailand) I'm still excited. No new places perhaps, but lots of people to see again and in barely a week there is apparently some football-type thingy beginning in Germany which might be quite good... 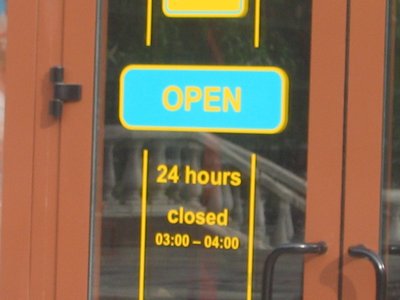 Sign near Red Square. Me thinks they haven't quite got teh hang of this yet...

Posted by Gelli 04:43 Archived in Russia