The tale of the human Trotskyist

There are some things that you don't always expect to see or be part of when travelling. And one of those is going off to celebrate the release from incarceration (2hours previously) of a crazy Trotskyist.

I had stopped off in Tyumen for a night to visit Masha, my wonderful HC host from my journey over. For those that don't remember her, she is the crazy girl with the most amazing socks you will ever see. And some wonderful multi-coloured wellington boots that she wears. 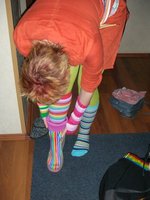 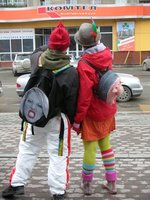 Masha resplendent in her trademark socks and boots, and with the Human Trotskyist in one of her less colourful moments

Depressingly, after having so much luck with tickets in Irkutsk, my luck deserted me, and I failed utterly to get hold of a ticket for the Kazan - Moscow leg. I don't believe it, but allegedly all 9 trains were completely full in all classes for 3 days. And I had no time to wait. Instead I managed to get a ticket through to Moscow from Tyumen for the following day, and even p-ex'd my Tyumen-Kazan ticket. It could have been much worse.
And so to the Trotskyist.

It seems that Tyumen has 3 Trotskyists. Admittedly 2 of them remain entirely unknown and probably a figment of people's imagination, but Trotskyist #1 happens to be a friend of Masha and the gang. A week previously, said hero had decided it was time for a revolution, and that action must be taken.

Thus, he took a powder based fire extinguisher and spray painted the exterior entirely in silver. Then donning a silver contamination suit of the style worn by people in environments where getting the slightest contact with anything could kill you, and the inevitable gas mask he headed to a new shopping centre.

And as far as I know, no, he didn't travel there by bus.

Sadly for him, but perhaps not the rest of the world, In the act of setting off his extinguisher he was over powered by 2 security guards, who prevented his deadly chamber of, erm, fire extinguishing foam, from being released over a crowd of shoppers. Showing that his attack wasn't entirely planned to perfection, he was then taken to the police station opposite. Nothing like going to somewhere which the authorities will take time to get to.

Anyhow, his lawyers seemingly managed to argue 'attempted terrorism' down to 'breach of the peace' and he was given a paltry 500rouble (about 10gbp) fine. What happened next remains a bit hazy, but out Trotskyist seems to have objected somehow, and ended up being given a week's prison sentence.

And it was from this incarceration that our glorious hero (?) had just been released and to which everybody was heading to celebrate his return to the real world. I don't get invited to freedom parties for released convicts that often (this is my first in over 12months), so who was I to turn down the chance to meet the man aiming to start the next Russian revolution....?

I admit to being slightly disappointed, although not actually by the grand hero himself, but more by the level of his comrades in almost arms. My favourite part of the whole story is that, somehow, he managed to argue that the items confiscated (one silver coloured fire extinguisher, one chemical warfare suit and one gas mask) were legally his and as such the court has ordered that they be returned to him on his release.... 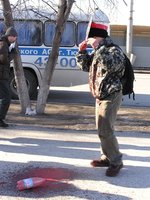 Archive picture of the Human Trotskyist. If you see this guy wearing a gas mask (although, obviously, if he was wearing the gas mask, you wouldn't see it was him) and carrying a fire extinguisher, don't worry, either Panic, or get your camera ready...

Anyhow, Tyumen more than lived up to it's reputation and memory of my previous visit, and was great fun. A random place to be sure, but some amazing people, and always something different going on. The previous visit was all about Orthodox Churches (long, long story), whilst this was all about the Human Trotskyist. I admit to being hugely intrigued - and I still am - as to why he was being constantly referred to as a human Trotskyist, and not just a Trotskyist. To me, that kind of implies that the rest of them are not Humans, although I can't quite see how a pig, for example, could be classed as a Trotskyist... 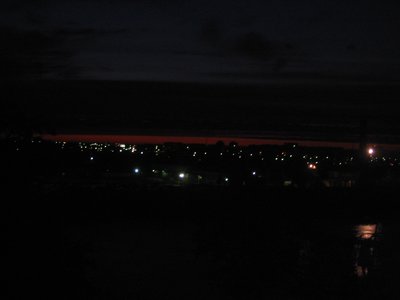 A strange red glow across the Tyumen night sky

Posted by Gelli 02:03 Archived in Russia