Back in the mother land

I awoke to a raging snow storm. I admit that this isn't unusual in Siberia, but in late May i was slightly surprised by it. In fairness, so was everybody else, and it was definitely unseasonable.

Spent a couple of days passing through the wonderful emptiness of Siberia. On the Southern edges near to Mongolia and China, there aren't even the trees and spread out shrubs etc that characterise the rest of Central/Eastern Siberia. Instead it's just empty rolling low hills and grasslands (or grasslands covered in Snow as much was). And after China, I loved the feeling of enormous emptiness. 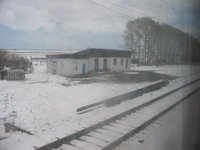 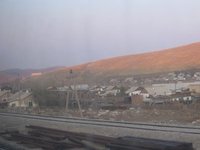 Passed through Ulan-Ude, but sadly without time for me to visit my favourite head (the huge Lenin head. For details/pics, see my previous entry for Ulan-Ude) and then around Baikal in daylight, allowing me to watch the Lake pass by, and see that the Eastern side at least is still entirely iced over, with people walking over the frozen lake.

Amazingly, I made it Irkutsk without killing or at least seriously maiming any of the aforementioned stupid traders, although it took will power of Churchillian levels to avoid it.

Irkutsk was my next deliberate stop off. Through tickets to Moscow etc are prohibitive in China, and also the through services only have 2nd class Kupe, so I stopped off with the aim of booking my own way Westwards, and saving money by doing it in 3rd class Platskartny. I managed to book myself through to Tyumen on the perfect train, and even then get another ideal service from there through to Kazan.

It's not supposed to be this easy.

After spending a night in Irkutsk, getting my visa registered, and catching up on such missed Russian favourites as Shastlikh (a kind of Kebab in Eastern Russia) and Blini (Pancakes), I headed down to Listvyanka for a night.

I really wish that I had significantly more time to explore the Baikal region properly, as indeed I had wished on my last pass through. It will happen, definitely, but that's for another trip. And indeed, I am opening the floor to anybody else that wants to spend some time around Baikal and cross via the more Northern BAM onto Sakhalin - If anybody else is interested in such a trip, and might want to share ideas or even team up, get in touch. It will be a great adventure, and probably somewhat mad!

All the way down from Irkutsk on the bus, I started getting flashbacks and fond reminisces of my last visit, in company of Ala, Irek and the Polish lot. Even remembering the packed bus and people squashed together sleeping in the aisle on the way down brought a smile to my face.

It was out of season still, and whilst the West bank was free of ice, there were no other tourists around that I saw, and I had the place pretty much to myself. The mountains across the lake were wonderfully snow capped, the sky was blue and cloudless, and the sun shining. It was a glorious spring day, and I loved it. After a visit to our old camping spot (where I had ended up sleeping on the beach until woken by a rain storm around 4am, and had also learnt probably the single cardinal rule from this entire trip [even more so than 'don't carry liquorice through customs" and "beware unmarried Japanese girls], namely NEVER try and drink vodka with a group of Poles. The people, not big sticks) and the half built house where i had later slept in to escape the rain (happily still half built and unchanged), I did nothing except walk. 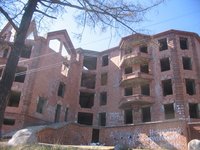 The house where i'd crashed to escape the rain on my way across from Europe, months earlier

On an aside, there's an almost funny story, or rather installment, in the travails of the wondrous Kiki and Christian, but I have decided not to regale it here unless requested by (un?)popular demand. It's up to you now.

After being in the chaos of China, and then on a train with stupid warring factions for 3days, it was wonderful to be out in the utter tranquility and calm of the shores of Baikal, in such glorious weather. I walked along the coast, and was quickly into an area of country and more or less utter silence. It was bliss.

With that, the following day it was time to return to Irkutsk, and after a quick wander around some of my favourite attractions (Lenin, of course, and the theatre for Dog shows) it was on to a train for another 50hours Westwards to Tyumen, and, almost, Europe. 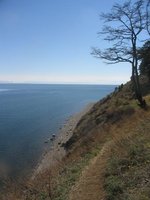 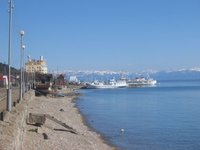 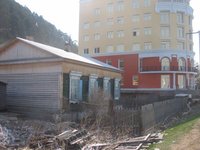 The tranquility of Lake Baikal, Listvyanka village with the snow capped mountains across the Lake in the background, and old and new side beside in the village

Posted by Gelli 00:10 Archived in Russia