There is no need to go through the at times chaotic and surreal details of my madcap dash through Beijing, but in the manner of Challenge Aneka at her finest, I made it with seconds to spare. 2 minutes later, several Chinese were curiously standing around a white guy sitting on the steps to an office block laughing hysterically, punching the air in delight and waving a small rectangular piece of paper around.

Had two great nights out in Beijing, although sadly due to a technological hitch (f*cking stup1d phone), never hooked up with Phil again for his birthday celebration. It was strange being back at Leo's. Two folks from my previous visit were still knocking around (one of whom, Jamie, I'd bet against with a Danish girl one night, and ended up being so embarrassed by the failure of the Canadian guy who I had backed and seemed unbeatable, that I'd changed my bet to "Random black guy" [this is not meant to be in any way racist]). In addition, Martin and his sidekick Christian, two Swede's we'd met on Don Det at New Year (although neither had any memory of that whatsoever, such was their addled state) turned up as well. In the way of hostels, we twice ended up with damned good groups of 25+ people heading out, and it was a fitting end to my time in China.

And I will return, I hope, very soon. 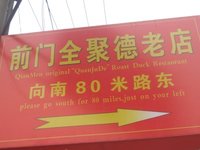 After supplying up for the journey, I headed to the station with plenty of time to spare, not wanting another metal detector incident, or to push my luck in the slightest. Although not mentioned anywhere on any station publicity, it was obvious which platform queue was ours. I haven't seen a single Russian looking person in the whole of Beijing, and then suddenly, there is about 40 of them queuing up.
Oddly enough, despite the horror stories, there was no trouble at all, and my bags weren't weighed, and my ticket not even checked until i was entering the train. Got on the train, and we left a minute early. And yes, i was on it. It's now almost 3 days ahead of me to Irkutsk, and I was Finlay leaving China and with enough time to get back to Europe.

Still no planes, and few obstacles ahead. In theory.

I couldn't help but be bemused at my troubles to get hold of a ticket, when i realised that I was out numbered by the provodniks (2-1) as the only passenger in our carriage. Hmmmm. 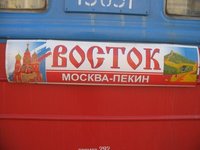 It says it's the Vostok, on the Beijing - Moscow run. And it even was. I'm on the way
Late the following afternoon at an obscure Chinese stop, i began to realise why, when the carriage suddenly started to fill in a big way with a large group of Chinese traders. They each had significantly more stuff with them than I own in total (let alone was carrying with me), and before long there was cr*p everywhere. 2 joined my compartment (China - Russia through trains only have 2nd class Kupe places, not the 3rd class Platskartny I normally use) and the remaining berth and all other space in the compartment where other useful things (such as oxygen) could fit were soon swallowed by their cr*p.

Oh well, doesn't bother me providing I still have my berth and enough space for my bag, which I did.

After passing through such delightful cities as Shenyang and Harbin, and spending the last of my Yuan in the restaurant car on a delicious but scarily overpriced (for a Chinese restaurant car) meal - where, impressively, with just a single look, the woman handed me the English menu as opposed to the Chinese, Russian or German ones, at 4am on the third morning, we reached Manschuria.

Manschuria is the Chinese border station. We were locked in our carriage for about 90mins whilst they whisked passports away (after a slight scare when a very friendly and English speaking inspector insisted I had overstayed my visa for a day, and I had to explain that he was looking at the last entrance date on my visa, and not the 30days after I had actually entered date. We then spoke at length about Lijiang - no never been, although he thinks I had - Tie Li, Brazil, Rawney [Rooney] and Sun Jihai before he eventually happily pottered off). No luggage or customs checks at all. Passports returned, and then we had about 90mins to wander the platform and small shop area. 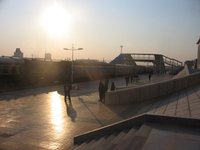 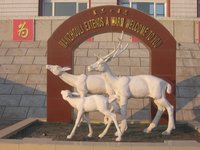 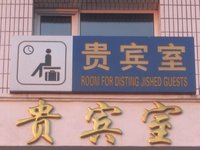 Manschuria station at about 5am after disembarking after passport control, the welcome sign at station (curiously not in Russian as well) and an almost perfectly phonetic sign

And then the fun started.
A sh1t load of new passengers, mostly Russian, then went through customs and boarded the train. I returned with about 20mins to go before departure to discover a huge heated row going on. It involved everybody else in the carriage, but was centered on my compartment. All the Russian boarders were also traders with large amounts of baggage and you can probably see where this is going...

Anyhow, everybody was being utterly stupid and I made the mistake of uttering words in Mandarin to a Chinese and Russian to a Russian (I think It was "Excuse Me" and "Thanks"). Upon which - and realisation that I was a third party foreigner - I was seized upon as translator extraordinaire. Despite maybe having as much as 100 words of each language, that was about 90 more than anybody else could muster of the other, and led to everybody shouting at me at once in 2 languages I don't speak, and my having to mediate between a group of extremely stupid Russians and a group of even stupider Chinese, who regardless of if they knew each other beforehand had now forged into a Chinese mass and a Russian mass.

We went 25mins to the Russian border, in the process going from 7.30am and brilliant sun, to 2am and still brilliant sun, such is the way of Russian railways and use of Moscow Time. It was then 3hours stuck on the train whilst we went through Russian immigration (easy), and customs (easy for me and the Russians, hell for the Chinese). The Russian inspector enjoyed making every Chinese person open every bag and throw stuff everywhere whilst searching for anything vaguely contraband. In such an enclosed space and with so much stuff in it to begin with, it was utter Chaos. What struck me most was the sheer amount of utter, utter cr*p and entirely random rubbish which the Chinese "traders" were carrying. Very little seemed even good enough condition to sell, let alone be vaguely desirable. And whilst admittedly they may make their money on the return legs, I can't work out how they would even break even on ticket prices trying to sell stuff which second hand shops would normally turn down.

After 3hours, we were turfed off the train for 4 more whilst they changed bogie's. Russian Railways are at a wider gauge than the standard gauge Chinese - and most of the rest of the world - meaning time consuming delays at the border as they don't yet have TALGO technology, and I doubt, ever will. 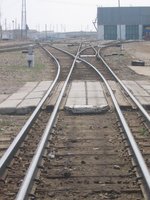 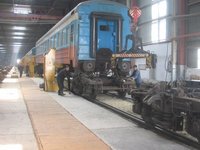 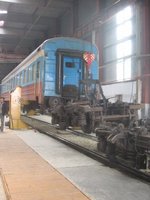 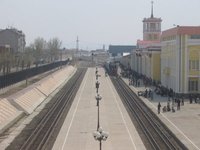 Dual gauge track at Zabaikalsk station, plus changing the bogie's in the shed from Standard gauge Chinese ones, to broad gauge Russian ones, ready for the trek through Siberia towards Moscow, and, below, Zabaikalsk station with passengers awaiting the re gauged train for re boarding

I spent some time in the carriage shed watching out of curiosity, wandered around the town of Zabaikalsk (and exhausted it's possibilities), got all misty eyed at the discovery that 2 carriages on my train had come through from Pyongyang, North Korea, got some food, did some reading and just farted around.

And then it was, finally, back on board to another 2full days of screaming, shouting, arguing and my needing to mediate as best as i could, whilst mostly swearing in an assortment of other languages and wishing they would all disappear in a cloud of smoke, or at least eaten by wild animals or some such.
As long journeys go, it could have been worse, but I admit that I've had more relaxing ones. Roll on Irkutsk. Or wherever the heck these people are getting off.

I've just realised that for all I will miss about China - and that is allot, even without considering the delights of watching old people ballroom dance in parks (I kid you not, this has become a major hobby of mine) - the hardest thing about leaving China (and everywhere I have been before it) will be learning how to use a knife again...

Posted by Gelli 23:33 Archived in China