It's getting really, really tight...

With Xi'an out of the way, it was back to the trek back. Although it isn't necessarily somewhere i will rush straight to return to, i like the city and am more than happy that i eventually managed to get to the Terracotta Warriors. But I'm in a rush, and after 2 stationary nights for leisure (a day at the Warriors, and a day spent wandering the city with some people including a long trek in the blistering heat around the impressive 14km long city walls), it's back on the road home. And no more Heart. 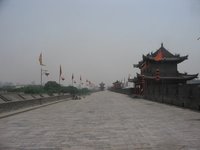 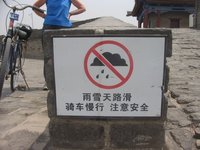 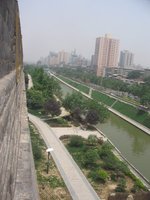 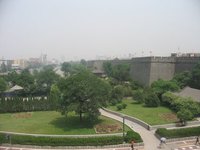 View along the vast Xi'an city walls, then two views from the walls, and a brilliant sign on the South East Corner of the Walls, which I don't ever want to translate for fear that it might make more sense!

I headed back to Beijing, praying extremely hard for a sudden bit of luck, but not really expecting it at all. I've more or less resigned myself to flying. It's either that or go up via the river at Blagoveshenk on the least known and touristed (but actually cheapest surface route between Moscow and Beijing) and be a day or two late returning. Assuming I can then get a useful ticket in Blagoveshenk, of course. It's a possibility

And besides, I had an appointment at the Turkmeni embassy to meet the Ambassador.

I'm not entirely sure why, but things seem to be happening quickly and with an efficiency quite unlike anything I've come across in that part of the world before. The more I think about that evening, the more I'm convinced that there is a hell of allot more going on than I know about, and that is really playing on my mind.

What the hell is the real story here? Somebody? Anybody? Answers on a postcard, please.

4 hours until deadline moment (end of business on Friday, meaning last chance for tickets) and still nothing. I was expecting it to be tight, but 4hours - and i will still have to dash across the city and somehow find the correct building even if successful - is starting to cut things a bit fine, regardless of the confidence of my agent that it is early days yet.

The embassy experience was, erm, interesting, and curious but not exactly enlightening in the slightest. More than that, I won't say for now.

2hours to deadline I get a phone call.

Fart around some more.

One very lovely agent has found me a returned ticket, and in the nick of time. But it's too late to deliver it (meaning I didn't have to stay in the damned hostel after all, as the only reason I did was for a delivery address. Bah!). All I have to do is get to their office, in a neighbourhood which i don't know - and I don't actually know where I am myself, at this point - in the next hour to claim the ticket. If I fail, It's all over right at the end and in the cruelest way possible.

This is not necessarily a sure thing under any circumstances. 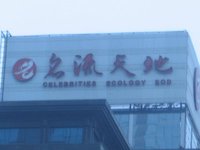 An odd building sign, in Xi'an. I have no idea what it's supposed to be, but I am definitely intrigued!

Posted by Gelli 21:40 Archived in China