Dashing through the South of China

You can always tell who is Chinese and who is Laotian in Northern Lao. the Chinese are the ones having huge animated "Discussions" with large crowds watching, whilst the Laotian's aren't. So after an hour of arguments between rival bus drivers (groan) we actually left heading to China. After 3 entrances with no problems, i was due an awkward Chinese entrance, so can't really be too surprised. Leaving through Mohan had been fine, but entering took time. And lots of it. All 4 foreigners on the bus had issues, and each of us took well over an hour to process for different reasons. 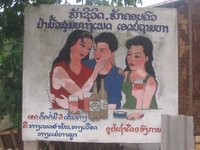 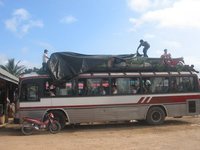 A sign outside the Luang Namtha Bus Station (no, I have no idea) and loading a bus heading south

But made it to Mengla OK, and lucked out with a berth on the last sleeper bus of that day to Kunming, leaving in about an hour. Was joined on board by one of the the most stereotypical ignorant American surfer dude type people it's ever been my misfortune to meet. Sat for over 3hours at the same spot (more or less) as was delayed on the way down due to roadworks, and had the most stupendous rain storm. My MP3, for the record had excelled itself with a string of China related songs within the first hour or so of entry, followed by such delights as Blind Melon (No Rain) just as the heavens opened.

In Kunming i again lucked out and got a hard sleeper on the next train to Chengdu (Xi'an full, Chengdu an easy alternative) just 2 hours later, and spent a day going through some fantastic remote scenery in the South West of China and Himalayan foothills. In Chengdu I managed to get a useful connection North, giving myself about 6hours to have a quick wander around the city (pleasant, if like all others, under reconstruction) before heading through to Xi'an. I really need to return to Chengdu, and also the area between there and Kunming, but for now, time does not allow it. 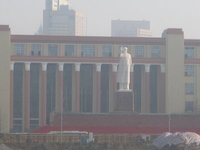 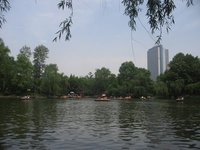 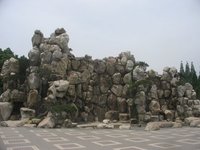 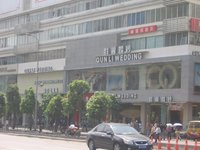 Images of Chengdu, although the bottom one is really beginning to make me think that somebody (Kiki?!) is giving me not so subtle hints

And thus after 8days of straight travel, I had made it to Xi'an, my first rest point on the mad trek North. And even with a day or two free to be a tourist and visit some Warrior type people... 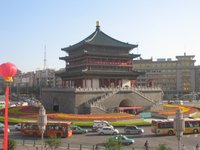 Xi' an Bell Tower in the centre of the walled city

Posted by Gelli 22:58 Archived in China