Catching up with an assortment of folks

Thailand is often described as the land of 1000 smiles.
Disappointingly, i can offer no notes on that at all, as i haven't seen more than average people smiling or looking even vaguely happy. Perhaps I'm missing it, or perhaps it's a myth, but most people are certainly not smiling, at any hour of day or night. Happily though Thai hospitals do indeed seem to live up to their reputations and I have no hesitation in recommending them.

I might even live long enough to see some of this place.

The bus (which seemingly only runs Westbound, not Eastbound) was fine, and only the last section to Poipet was unpaved meaning that i wasn't whacked around as much as I'd feared. Poipet was again an easy place to cross (i either got lucky or the stories have all been blow out of proportion), and I again pondered the building of hotels and casino's in no-mans land between the frontiers, which obviously makes sense from certain perspectives, but seems to have slight problems from others. I was thoroughly checked over in Bangkok proved i had nothing broken, given some pills for the pain and swelling and on my way again with ease. Cheap, efficient and friendly. Three things i am entirely unused to in the medical service. 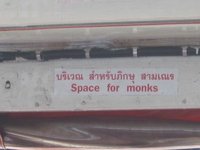 I made some attempts to actually be a tourist whilst in Bangkok, and spent time wandering at random, riding up and down the river, visiting the Royal Monastery of the Emerald Buddha and Royal Palace and some of the other sights. If you ignore the traffic, and maybe the 500m2 around Khao San Road i think i could get to like this city despite first impressions. It is hot though, and you need to be showering about every 12minutes or so if you have any intention of trying to stay even vaguely fresh. 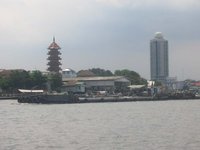 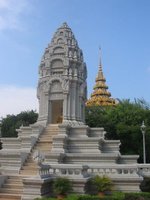 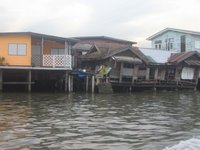 But my time in BKK can mostly be taken care of by a series of meetings with people. Timings worked to my favour, and sometimes these things just happen. A bit of good fortune every now and again is certainly no bad thing, and thus it was that in 4 nights, i managed to meet up first with my Aunt, passing back through at the end of her holiday, plus a friend of hers I'd met before and his lovely new wife. Then the following day, i caught up with James (Glorious leader of the intrepid quintet who left Shangers together to climb Huanshan and be attacked by monkeys) who was passing through on his way from India to Tokyo to work for a bit. Things seem to be going well between him and Kyoko, and I can only hope that (and she certainly seems it) Kyoko is significantly less marriage crazed and warped than Kiki was/is.

I'm being bombarded by emails from both, wanting me to try and sort out their marital problems (he wants a divorce, she - unsurprisingly - doesn't understand what the problem is. The answer, on the off chance - I pray not - that she ever finds this blog is that you conned a random foreigner into marrying you after knowing you for only 2 days, and when he was mullered out of his face).

It was great to see them both again although as it always does when you re-meet people in strange places, it feels a bit surreal. Sadly an attempt to hook up with Rick (from the old Landy days, for those who know about them) the following night failed on logistical terms, but i hope to catch up with him in the next few days. No big deal, as I spent an entertaining evening out with some guys from the hostel instead, more of which to follow. But on the fourth day, came the really odd one. After a small CS meet-up with the excellent Sam and Des, plus visiting Kiriyaki, a trawl around the Weekend market and watching in bemusement as Kiriyaki (who owns a clothing store in Greece and was on her way home from a fashion show in Korea) started running riot in the market, buying more or less anything she could lay her hands on, I headed into town to hook up with Matt Lavender and a group of his friends.

I don't know if you've ever done it before, but it is undoubtedly a very strange and surreal experience to meet somebody you haven't seen in about 16 years. Especially as you were both 12 when you last met.

I'd randomly come across Matt's website (http://www.geocities.com/fourontour/ ) through another school friend a few years ago. With another friend, he successfully went overland from the UK all the way to Australia, something which many try and most fail to achieve (the other two guys of the four had to fly out from SEA to Australia) due to the last leg from Indonesia. They had even done the same Zarubino - Sokcho ferry ride, something rarely attempted by travellers, although obviously at a better time of year... Anyhow, I'd got back in touch, we'd traded a few emails, and as he was now living in Thailand had agreed to meet up when (if?) i ever made it that far.

Amazingly, and against most peoples expectations - especially mine - i actually had.

Perhaps unsurprisingly, conversation was slightly different to our last meet. Whilst i can't remember in the slightest what we talked about last time I'm fairly sure that items such as "fancy another beer?", "look at the knockers on that slapper" and "impressive distance on that Banana" probably weren't amongst them.

I ended the night on my now strangely traditional efforts to help somebody. I had met a couple of young Scandinavian girls in Cambodia and agreed we should meet up in Bangkok again if possible. What i wasn't expecting was the 5am hysterical and incoherent phone call. One of the girls, who shall remain nameless, had somehow manged to loose the others after she went outside for a little, coming back to find the bar now shut and no friends. Or bag/money/key etc. After about 30mins of drunken stumbling, she had made it back to the hotel, to be told by the security guard that whilst she had been staying there, did she not remember checking out that morning and moving somewhere else? Now having lost the plot completely and then a shoe to boot (sorry), wandering around hopelessly lost and alone in tears, she had come across a group of drunken lads, who in their efforts to help had seemingly been more friendly than she would have liked.

She had managed to get to a police box, who had laughed at her story and kicked her out into the street. And perhaps unsurprisingly she'd really lost it at that point. 30mins after the phone call, I eventually found her curled up in a corner of a garbage skip on a side street in something of a state. Much coaxing later and we got her out of the skip, calmed a bit, water and food in to her, and with a bit of a plan. Proceeding then to knock on virtually every guest house in a 300metre radius of KSR looking for her new abode, until amazingly running into one of the other girls at about 7.30am, who realising she hadn't returned and had no bag, had set out to find her.

I think she'll be OK, but it will take some time. So much about travelling is great, but there are always things that happen which jolt you back into the sad reality that real life continues, and incidents do occur. 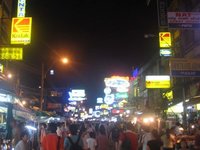 The horrors of Khao San Road at night

Posted by Gelli 01:04 Archived in Thailand