Another explosion, and the now inevitable monkey incident

The next morning, I was woken by some cracking, a huge bang and the smell of smoke. After braving opening my eyes to discover that my room fan had blown up (literally - it was in about 10 pieces scattered across the room), it occurred to me that I actually hurt like hell. My lower back which I'd banged in Vang Vieng and had been more or less better was on fire, whilst my neck felt like it had been wrenched in all 6 directions at once, and was not good. My right knee wasn't happy either, and the large pool of dried blood on my sheets was interesting as well, if only because I couldn't for the life of me work out where the heck it had come from. Which was slightly worrying in itself. 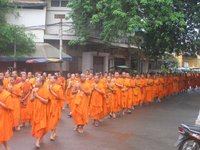 Monks heading to the temple

But who am I to let a little pain get in my way. I have things to see and do, gawd damned it. Despite a chunk of pain, i managed to haul myself enough to spend a day around town. I watched a procession of monks, visited the National Museum (which concentrates mostly on artifacts instead of propaganda and the wars) and Royal Palace/Silver Pagoda (very pretty, if slightly overdone in places)n and retrieving my passport complete with visa. I can say that of all the embassies and consulates that i have ever dealt with in the world - and that's a fair chunk - the Russian consulate in Phnom Penh has been by far the easiest and most friendly, and is highly recommended to anybody. Especially when you compare it to the normal Russian/former soviet embassy experience. It's stunning. 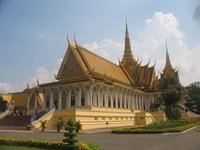 The Royal Palace (above) and Silver Pagoda, below 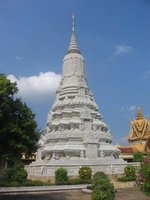 I also got to the Independence monument, cool central market (a great art deco building), and had the now inevitable monkey incident. What is it with Monkeys this year?! Don't they know that it's the year of the dog?? At Wat Phnom, a large Wat on a small hillock in the middle of a large roundabout, fairly large Monkeys were wandering all around and enjoying themselves. A couple of female tourists appeared to stare too intently at one of the larger ones, who freaked and came and tried to grab one of the girls bag and camera. They shrieked, and with one monkey still grabbing on to her back, ran. Towards me. Great. So i ended up with several monkeys headed towards me making lots of noise, and two shrieking girls a couple of metres behind, using me as a partial screen whilst trying to remove the persistent monkey from one girls back. I managed to grab it off and get it away without a bite or scratch (although i yanked my neck in a direction which it REALLY didn't like), although by that point I then had a good couple of dozen advancing towards us. I more or less decided at that point that I had exhausted the possibilities of Wat Phnom and with my neck really hurting, hurriedly left taking the girls with me. 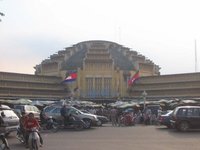 And randomly, and very oddly, the Cambodian queen looks scarily like Queen Elizabeth II. Actually, the first time I saw a photo it was on the Queen's birthday, and my first thought was that they were showing a photo of her in her younger days, before i realised who it actually was. 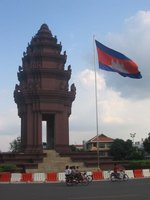 It's a shame that I've had such a short time in Cambodia. From what I've seen, i really like the country. However, I would need at least 3 or 4 weeks to do it even vaguely justice, and have ended up with 1, of which a few days have been written off due to traveling to hand in passports etc, and one which i was in too much pain to take full advantage. Phnom Penh is a cool city, and i think i could happily live there for a while. The mosquitoes around the lake are annoying, but otherwise it's a great little place, and the only city I have so far come across where elephants wander around and up and down roads entirely unattended. A vaguely surreal, but very cool sight.

The food in this country is amazing. I could quite happily live off Khmer food for a while, especially Lok Lak (sliced beef and veggies in an oyster sauce with rice) and Amok (a kind of fish soup). I will seriously miss both, and will have to add them to my list of foods to source at European restaurants. Deep fried tarantula had to be tried, and whilst it's ok (although the juice which oozes out when you bite into it is disconcerting) and I'd eat it again, it won't be the end of the world if I don't. But another random local culinary speciality added to my ever increasing list of strange things that I have eaten.

But sadly, and without further ado, I'm leaving. On a 13hour bus ride (yes, despite the protestations in BKK, i did indeed prove that there are direct BKK - pp buses, and several of them each day) back to Bangkok, with the aim of discovering whether their hospitals are as good as everybody makes them out to be. 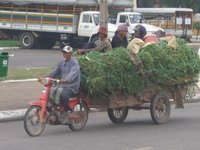 Posted by Gelli 23:56 Archived in Cambodia

What!! (sorry I just read this)

The fan things sounds not-so-good, but I hope you don't mind be saying that it also sounds hilarious...?