I don't know why it is, but I never seem to have a working camera when something goes properly wrong. My batteries were dying when coming down the North Korean coast in the typhoon on that 'ferry', so the best parts could not be captured. When I rolled the Landy into a Norwegian field a couple of years back (hi Morten) I had a camera with no film. Today, I had no batteries whatsoever, and no chance to get them because i had left early.

Mistakes like that should never be repeated. My first task now will be to go out and buy a dozen sets of batteries in order to make sure I'm never caught short again. Some things need pictures to be believable and sadly, i have none.

Sometimes, being a little adventurous doesn't pay off quite as planned.

To save myself the 4usd bus fare (and for some variety, having spent most of the last week on buses), i decided to hitch back to PP. There are lots of local transports, and i figured that even if it cost me a couple of dollars and a couple of hours longer, the experience and variety would certainly be worth it. I got a moto to the edge of town, then started walking, awaiting the inevitable pickup or minivan. Barely 5mins later, and a Toyota minivan (of the 8 seat variety) pulls up, and offers to take me all the way for 50cents. Great news. So ignoring the 22 passengers in the van, I climb on to the roof to sit on top of a precariously high pile of assorted luggage (including 3 motorcycles), along with 7 others and off we go.

In many countries, manufacturers seating capacity and number of passengers conveyed are not exactly the same. One of my favourite memories of Morocco was a Mercedes taxi which had 9 of us in the back seat, plus 3 in the passenger seat, and then we watched half amused and half incredulous as a final passenger got in, sitting between the driver and the drivers door. In Cambodia, a simple pick-up can have 5 in the cab, and up to 30 or so standing in the back and sitting on the small roof. And so in something already designed to carry 8 passengers, 30 or so plus all their luggage and a few motorcycles isn't actually much of a big deal. All was great for the first three hours or so. The locals delighted in having the farang - or Gaijin, in Japanese - on the roof, and we laughed happily and traded snacks whilst whistling through the wind. It was at a moment not unlike that that we rounded a corner whilst being overtaken by a bus to discover 3 lanes of traffic (plus a couple of cyclists) heading towards us. My maths has never been that great - to all those who remember my exploits whilst trying to pass (on 9 occasions) 'Mathematical basis of cartography' will know what I mean - but even I can work out that 5.5 into 2 doesn't really go all that well, and that something had to give.

To cut a long story short, together with a car (which was the middle of the three lanes bearing down on us) we drew the fold card. Sitting so high on the roof (i was probably 3.5metres in the air) gave me an excellent view of the impending situation, and after a split second analysis of my options - the passing bus was rejected as it shot past quickly as we slammed the brakes on, and i didn't fancy jumping into the truck heading the opposite direction - did the obvious. More or less in tandem with two of the other roof passengers, I jumped off the side of van, aiming just to get as much distance between me and the inevitable collision and praying like hell that I would miss the tree (i grazed it) and that the ground would be soft enough (i got covered in cow sh1t) not to break too many bones.

I'm not entirely sure what happened in the next few seconds, as things were happening extremely quickly in all directions and I possibly blacked out for a second or two. However i do remember there was a couple of huge crunching and banging noises, rolling over to look up and seeing a huge cow standing over me looking down curiously, seeing a bus disappear at speed towards PP and a lorry and minivan towards SR. A cyclist had stopped by the roadside and was looking bemused, and a couple of motos and some locals were fast approaching excitedly. The car was on it's side down in a ditch on the other side of the road having embedded in a tree, whilst the van that I had been on, was perched at an unlikely angle of about 70degrees against another tree, having shed it's load completely and careered down a metre high embankment and through a small pond. One of my fellow roof passengers was hanging in the tree, a couple were on the floor (one spread eagled under a large suitcase, looking like something out of a Wile-e-kyote cartoon), the rest nowhere to be seen.

I pondered my situation a little. I could see that the car passengers were being helped out and seemed to be mostly OK. So after managing to scare the cow away enough that i could move, and investigating my body (I still have the requisite number of limbs in approximately the correct number of pieces, although much of me hurts like heck) I forced my way up, wiped some of the sh1t off me and staggered over to the van.

What happened next was utterly astonishing.

Completely on queue and in perfect unison, bodies appeared out of the windows on the left hand side of the van and with a couple of locals arriving perfectly to push, the sudden shift of weight righted the van. 10 seconds later, the engine started and the driver drove up to the road. Everybody got out, looking a bit dazed, and shook themselves off. A little blood, a little crying. Nothing more. The van had been so packed that there was no room for people inside to actually fall around, and as it hadn't toppled completely (although how it didn't topple falling down the embankment, i have no idea), there were no serious injuries. Luggage was recollected from it's scattered place over the field. The boot was bent back in to place. The guy dropped out of the tree. Those missing from the roof magically appeared off the grass, and although we all had a few bruises, all were mostly fine if shaken. The motorcycles (one now utterly fecked), bags and crates were hauled back up and reattached to the roof, everybody re-boarded. With nothing more to do, and no camera to use, I got back on to the roof.

Thus barely 5minutes after we had all nearly died a messy death, to the cheers of locals and some utterly, utterly bemused cows wondering what all the fuss was about, leaving a wrecked car on its side in a ditch, we were barreling back down the road towards PP. Albeit in a somewhat bashed up van (the right hand side of the van was, shall we say, not in pristine condition anymore...) and with more black smoke bellowing out than is possibly healthy. We even caught and passed the offending bus to a chorus of waves and beeping.

Excepting a small crash where we knocked over a (riderless) moped, we reached Phnom Penh without incident. 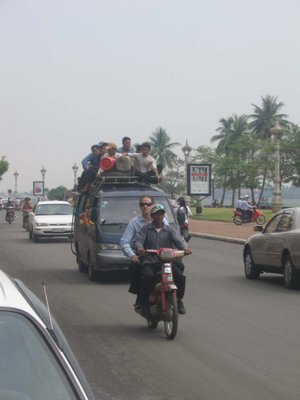 A minibus similar to the one I had to jump from, if not quite as full as my one, in the streets of Phnom Penh

Posted by Gelli 07:30 Archived in Cambodia

Glad you're still in one piece! Sounds like you're having quite a time!