From Murray Head to Kim Wilde

It's possessed. It really and truly is. For those who have an unhealthy knowledge of my trip (i.e. you are stalking me) or a freakishly good memory may remember that when we climbed Huanshan, my MP3 player decided that it had a sense of humour, and showered me with strangely apt songs the entire way up. Now i think there is more to it. A four hour trek up to the Thai border during which we were all constantly being drenched with water thrown at the side of our open sided Sawgny (fl1ppin New Year. It doesn't mix well with Camera's and MP3 players...) followed by another surprisingly simple border crossing brought us to Thailand. The country in SEA that I have always been least interested in, but logistically I had to visit anyway, so will give it a bit of time. On the bus headed inland to make a connection to Bangkok, I put on my MP3 player, hit random play all, and then from a potential selection of over 8000 songs was treated first song to a nice rendition of the Murry Head classic. I laughed so hard I almost fell out of the back of the Sawgny.

The Night train from Udon Ratchatani was standing room only, so we ended up getting a bus. The 8hour journey took 13, and we were on what can best be described as a wannabe 70's party bus. A psychedelic paint job which even South American revolutionary (and recent Swedish convert) Markey would have been proud of, including go faster stripes, fins on the exhaust, huge numbers of speakers, disco lighting (including a glitter ball on the ceiling) and a back seat of a velvet horseshoe shaped couch were all new to me on a respectable public bus. And as the doors don't physically close, in the back you spend the night hoping not to fall the wrong way when asleep, or you will end up bouncing off tarmac at high speed... 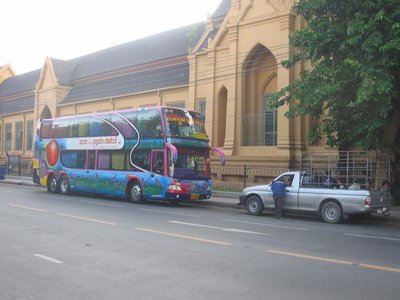 A much newer and significantly less pyschadelic bus that the one we were on, but you get the idea...

Whilst the journey itself was fine (sitting on the steps at 5am with your legs dangling over the road whilst watching the fields shoot by is strangely liberating), arrival in Bangkok was cunningly delayed so that it coincided with morning rush hour, and then we ended up being dropped on a slip road miles from anywhere useful. Yay. But managed to get some taxi's and head over to the infamous Khao San Road. It wasn't my idea. In fact, i had specifically wanted to avoid it. But the 3 returnees all swore it was the best and easiest place to stay and with no better idea and in urgent need of a shit and a shower, went along with it. It was a case of find somewhere which had space, which we all managed (in different guesthouses, naturally), and after taking care of business, went to have a look at the Khao San Road. 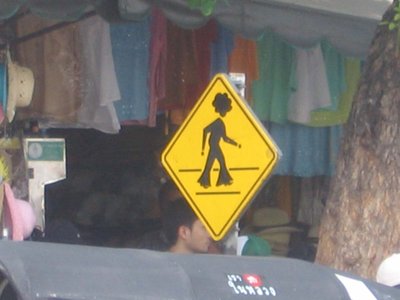 I hate the Street, but admittedlky I did quite like this sign near to the Northern end of KSR

For all it's reputation, it is a surprisingly small and insignificant road, but even at about 7am, the number of white people around was scary, and not a single local who wasn't working was to be seen. Any number of people seemed to still be drinking from the night before, whilst of new arrivals and departees, all with huge overladen bags and looking bleary eyed, wandered randomly. And one of the biggest street cleaners I've ever seen (that would have been fun to have for New Year water fights. Possibly only a proper water cannon - guessing the King had that - could have beaten it) was jet spraying piles of vomit off the road. 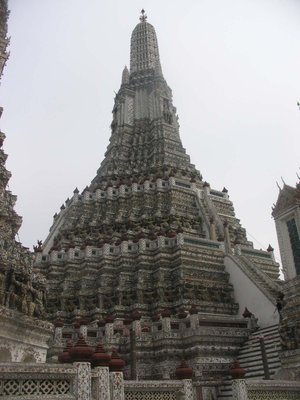 The reason that Thailand had never really appealed to me was that it struck me that it would be chocka full of mostly young (18/19) drunk, stupid and obnoxious British kids. Currently, travelling and gap year is the 'in' thing. Everybody travels. What they really mean is they go to Thailand for a month, then Australia for a year and then go home. And with that, they know everything and have travelled. Whilst I have no problem whatsoever with people doing such trips, I just don't want to be near them the whole time. After all, if i want to see lots of young drunk Brits, I'll just go to Sydney. 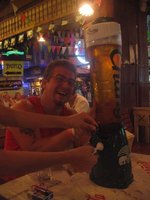 Sadly, Khao San Road at least confirmed a chunk of my fears. I'm not writing Thailand off by any means, but I was happy to leave KSR as soon as possible. Which as it turned out, meant the following day. I spent a day mostly doing chores and sorting stuff out, during which time I happened to browse the Russian embassy of Cambodia page, and discovered something I had previously forgotten. It's only open 3 days a week. In mornings only. Russian bureaucracy means that you need an invitation to get a visa, and your invitation specifies the embassy/consulate where you will apply. I had long heard that the Russian embassy in Cambodia is one of the easiest in the world to deal with, so whilst in China had sorted my invitation and put down PP. So i couldn't say sod it and just use Bangkok. Erin meanwhile had to get her Indian visa, and as there is allegedly no Indian representation in Cambodia, she had to do that in BKK. The bureaucracy of diplomacy and visa's is a constant source of amusement and delight for me, just because it's always so unpredictable.

A check of buses at agencies on KSR told me that (although i don't believe it and intend to prove that it's rubbish when in Cambodia) there are actually no direct BKK - Phnom Penh buses. I would have to go to Siem Reap, spend a night and go from there. And in order to be certain to get to the embassy that week, I had to leave the following morning. I went to a dozen travel agents, was quoted between 270 and 900 baht for a ticket, took the 270 one and left the following morning, with vague plans to hook up with Erin again in Siem Reap with all visas in place. The same bus contained people with tickets from several different places and who had paid (in one case) up to 1100 baht (!). All bought from KSR agents. That's over 4 times what I paid, and is very scary.

Yes, you can buy your Cambodian visa at the border. However, if you are on a bus, this will be handled for you by an agent at the cafe where you stop for lunch before crossing the border. And you will pay heftily for the privilege. Oddly enough, despite all the rumours of bribes and payments needed at the border, it was an easy crossing, although I had to do my normal 'walk quickly and pretend you know where you are going' trick to lead everybody to the border after we were unceremoniously dumped in car park and told vaguely to go "that way"... 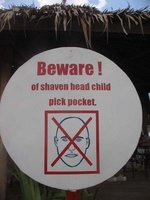 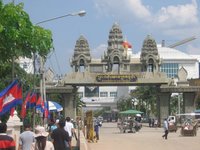 A warning sign on the Thai side of the Thai - Cambodian border at Poipet, and the crossing itself

Three buses later, and we were in a packed minibus leaving Poi Pet heading towards Siem Reap along one of the most fun roads in Cambodia. Allegedly, they will make it a real road in the next year or so, but that would be impressive going. It's not all that bad providing you accept that you will be bounced around like buggery, and that it will take a good 6hours+ or so to go about 130km. I have had many many worse journeys in my time, but that doesn't make the constant bone jarring any better. Plus the slow speed made us perfect targets for still enthusiastic crowds of New Year celebrating kids and their water. And then a lightning storm added to the excitement.

I don't even need to tell you what my MP3 player came up with after only 3 attempts, do i?

Rolled into Siem Reap around 9pm, taken straight to the obligatory Guest House of bus company in middle of nowhere, and despite the previous protestations from the entire bus that we would mutiny if not taken to the town centre (and even though half already had reservations for places), in the end despite everything, only myself and an English girl Sharon - the only other solo traveller on the bus - actually said f*ck it and escaped. Gullible fools.

And despite it being after 10pm, we even managed to find a room in a great place in the centre - the Dead Fish. It's hard to describe, except maybe as laid back, semi labyrinthal, has rooms which from the outside like like a temporary film set, and which includes a large crocodile pit in the restaurant. I admit that I've never stayed (or eaten) in a place with a crocodile pit full of respectably sized - up to maybe 1.7m long - crocs before, and the fact that their pit was unprotected on one side with only a small picket fence on the other, and less than half a metre deep (i thought crocs could climb, at least a bit...) gave the place an interesting twist. You have to wonder how many drunk people have fallen in by accident.

I spent 6 hours on the bus the following day, greeted on arrival in PP with a mad scramble of maybe 80 deranged tuk-tuk and moto riders and Guest house reps all baying for blood, or at the very least, the business of the 8 white people on board. The were so crazed that as we sat there, the bus was being rocked back and fore a la scenes you see in riots, whilst people were climbing over the bus and literally trying to smash windows to get to them. It's actually quite funny (especially watching those to whom this is a new experience), and you always at least feel welcomed! I somehow escaped with both my bag and my life, but it was a damned close run thing. And I seemed to end up in the frying pan anyway, spending the evening and night being utterly ravaged by evil mozzies. Despite that, i met some cool people, and my first quick look at Phnom Penh was definitely promising. I look forward to returning. But before that, it was a morning trip to the embassy (later than planned due to the 5 moto riders who all got lost and dropped me in increasingly unlikely and unhelpful places), to hand over my passport and stuff. And then another 6hour bus ride back to Siem Reap where a smaller and slightly less frenzied moto crowd awaited, although the drop in scale was compensated for by the fact that I was (along with a very scared looking English girl) one of only two tourists on board for them to attack.

Yes, i have just travelled North from Don Det, via a third country, Siem Reap and Phonm Penh, 4 days of solid travel and a detour of several thousand km, just to get to Siem Reap. And yes, it is barely 300km from my start point, but by now you must be used to my barely logical movements. But at least I'm finally in Siem Reap.

Posted by Gelli 00:18 Archived in Thailand