Early days in the green paradise of Lao PDR

Astonishingly, the Chinese proved their benelovent selves yet again. For somebody with my record, I should have run into trouble entering or leaving China at least once, but they've all been perfectly routine to date. The journey down was slightly longer than expected due to a prolonged wait for some road building, a common theme in China, although delays are surprisingly rare. And this being in Yunnan, some of the workers were hard at work as expected so that the road could open again in the shortest possible time....

In Lao PDR, we suddenly realised that we had to work out a few minor details. Like where the heck were we actually going that day, and the the fr1cking hell would we get there. A bit of a peruse through the book and a game of rock-scissors-paper later, we were heading to Luang Namtha. Or rather, trying to work out how to get there. The Lao side of the border consisted of a small restaurant and a couple of houses, and then the road sweeping off into the distance. No taxi's or Sawgnys (flat bed trucks or pickups with a covered roof and benches down each wall) in sight, and the only bus was going Non stop to Vientienne, which was of no use.

Erin leaving China at the obelisk in no mans land between the Chinese border at Mohan, and the Lao border at Boten

So we did the obvious thing and tried to hitch. A few rebutals later (normally combined with much laughter at the mere mention of Luang Namtha) and a local guy with a nice Toyota pickup ambled over, and said he would take us for 25000 each. Lovely man. In China just before leaving, i had changed 10usd to kip (the rate is about 10,000 to a dollar, making it easy) and recived a wad about 2inches think of 1000 kip notes. With the biggest note being only 20000 (2usd), we were in the land of monopoly money.

So we hopped in the back of his pickup, surrounded by some shopping and boxes, and headed off. To stop about 1km further on at a road block. The Chinese are building a new road (and a damned good one) between the border and Luang Namtha - and onwards - but which mean't that the road was only open for 2x 3hour spells during the day, plus, cunningly, at night when the border is shut so it is of no use anyway. We killed our 2 hour wait by wandering around the border down, a couple of KM away, and then playing with 2 stupendously cute young Chinese kids who took great joy in the strange white people they could run up and hit/laugh at. Even after the one had urinated on the floor, crawlled through it and still delighted in high fiving us with his soggy hands. You gotta love kids. 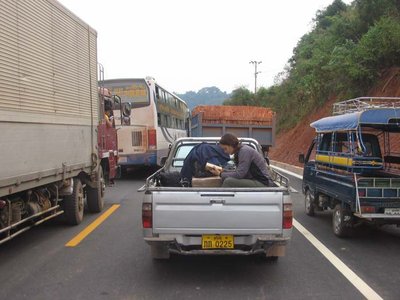 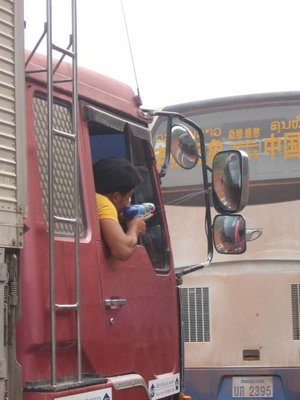 Crazed for food at the road block leaving Boten, killing time by reading in the back of the pick up, or cleaning windows if a lorry driver, and the Chinese kids

And then with the border finally opened, a somewhat rapid, (the roads really are lovely now - perfectly smooth and empty) and windswept roller coaster 75 min ride in the back of a pickup to LN. Although i've been in the back of pickups before, it's mostly been places with poor roads and speeds have been slow. There is no European equivalent to the standard american TV/film way of riding in the back, so this was my first such journey at speed. By the time we arrived, my hair was wind slicked into such a style that even vidal sassoon would have been able to gel it to such a position. By my god, it was a great journey, and so much fun. 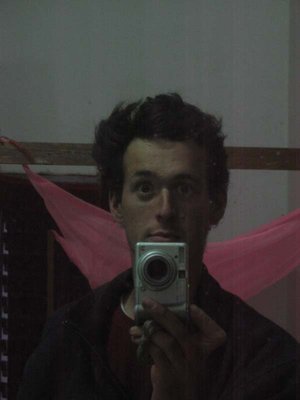 Yup, you kind of ending looking not entirely like this...

On our first day in Luang Namptha, we did the logical thing, and hired two motobikes. Admittedly you may be able to pick holes in that logic (most people normally can find more holes in my logic than the average piece of Emmental, but in order to understand the logic you need to be attuned to that extremely rare thing of "Rich-type-brain". If you were, you'd know it all makes sense) when you realise that neither of us have ever riden a bike before, and between us have maybe a dozen rides on the back of them in total. But we figured, how hard can it really be?

This is the same person who managed to snap a ski into 3 pieces and broke both poles within 100m of his first attempt at CROSS-COUNTRY skiing. With my record, i really should know better than to go tempting fate by getting involved with such things, especially in a land with no such thing as insurance, and no helmets provided.

You can almost tell what came next, can't you....?

In all honesty, it's not really all that hard at all. With the exception of my first 5 seconds or so, which were, erm, perhaps slightly less conrolled and pre-planned than you would hope, and a moment when Erin decided that the mud looked really fascinating but forgot to stop the bike and get off before taking a closer look, it was mostly incident free. And stupendous fun.

And there you all were with your normal - and admittedly generally justified - expectations of disaster and cock ups. HA!

Paying the local kids to enter Poumpouk Stupa - A Buddist monument to a teacher, rather than anything to do with an alcoholic state - and the Stupa itself

Sure, we were two obvious white folk in a country they had been in less than 24hours, on machinery they had never used before travelling down dirt roads aiming towards we're not entirely sure what, but really, so what?

I could get to love this biking thing!

Before I left on this trip, i'd never been on a motorbike of any description. And now i'm hooked, and will be getting one as soon as I have somewhere to live again next. And after i've liberated my driving licence from the Romanian b*stard who's still holding it to ransom.

Erin and I with our bikes near Poumpouk Stupa

Personal message to a specific reader (hello, Mrs. King. I hope you are doing well back in Iowa). For the record, i would like to say that admitttedly despite much evidence to the contrary, i am in no way trying to get Erin killed by forcing her to hitchhike, ride in the back of crazed pickups, death buses, dangle out the back of Sawgnys, or to ride motorcyles recklessly around a strange foreign country. I'm not (currently) trying to sell her off or force her into the prostitution racket - although in fairness, I admit that i did offer her hand in marriage to a Chinese bike taxi owner - and i'm not deliberately getting her drunk on a regular basis. How was I supposed to know that her tolerance is significantly lower than it ever was in Korea? We are being entirely responsible and not undertaking anything of even vague danger. Everything to the contrary has been entirely accidental and unplanned (Read: Blame her, not me. And as I won't be in Iowa anytime soon, I don't want you to have all your anger towards my pent up for untold years. It could be very dangerous to your health).

Travel in Lao is slow. The country is mountainous, the roads bendy, and whiulst generally of a surprisingly decent standard, including pockets which are in not particularly great, and involve much slow bumping around. A 40km/h average is very good. And very little departs until it is full anyway, meaning listed departure times don't always stand for a great deal. We spent a day going from Luang Namtha to Nong Khiew, barely 250km away, using an assortment of Buses and then sawgnys (including one so full of people and luggage that we were dangling out the back). The fact that it was April 1st* being of no relevance except to make us briefly wander if the joke was going to be on us the entire day, as there would be no transport. But a day's travel in Lao is of no relevance, because the country is just so damned stunning.

I had been asked in Kunming which country I thought to be the most beautiful in the world that I had visited, and after much pondering, had plumped for Norway. After less than 3 days in Lao, I was fast changing my mind. It is hilly and mountains, has some great rivers, and everything is green. But not a uniform green. Green in so many shades that it it almost seems multicolour. The local villages, with their wooden construction, buildings on stilts and thatched roofs, lots of wildlife and animals, and as in China and Vietnam, lots of always happy and really cute little kids running around break up the green in just the right places. And as we proved at one of our enforced waits for more passengers between sawgny rides, you never know what you will see next. 4 elephants with riders, ambled down the road. I know it was just an elephant, but even so it was just great so see! I love it here, I really do.

And after Vietnam, that is a huge relief.

(((Please Note: most of photos in this blog entry are courtesy of Erin (www.erindoeskorea.blogspot.com/ and www.dropshots.com/eeking). Her camera downloads pictures automatically and mine doesn't, so i shamelessly stolen some of her pictures until i can get my own downloaded and onto TP. And by the time I could download mine, i figured there was no point replacing the existing pictures so i left them on and just added a couple. Thanks Erin!)))

Posted by Gelli 06:47 Archived in Laos