Back in Beijing, it was time to do some of that really horrible and utterly evil stuff which nobody in their right mind ever wants to do. Yup, i had to work a bit. I hate that word, i really do. But every so often, it has to be done. I also managed to finally catch up with Phil a few times, a British CSer out in Beijing who I'd tried to meet up with several times when i had last been around, but it just kept falling apart. Phil is stuck in Beijing after his ancient Ford Fiesta died in Mongolia on route from London to Ulan Bator. And despite being a really interesting and top guy, the b*stard even conned me in to helping him at work for a few hours. Every time somebody figures out what I do, they seem to find somebody who needs help. Oh well.

With then a few days to spare in Beijing until Erin's family went back to the US (Erin had been my host in Daegu, and has just finished working in Korea. Her family had visited her there and then they had all come to Beijing together to be tourists. In attempting to track her down at the hotel, thought I'd discovered a Chinese comedian when after much umming and ahhing, he asked if I was looking for 'Joking'. It took a while for me to realise he meant Joe King and wasn't having a laugh... We had planned to travel together down into Lao and Cambodia, partly to try and make her mother a tad less nervous about her daughter being out alone in the world. She feared Erin would be sold to slavery, whilst I promised only to sell her off if I got a good price), I took the opportunity to take i a few of the sights of Beijing i had manged to miss on my two previous visits. 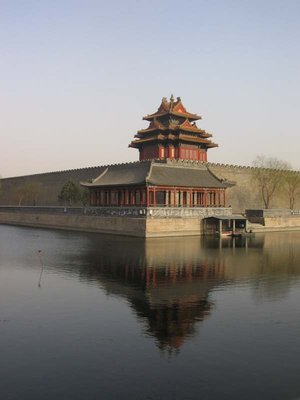 The rear corner of the Forbidden City from the outside

I finally got to see Chairman Mao in his mausoleum, my one "Must do" remaining, thus completing my set of dead communist greats after Papa Lenin and Uncle Ho. Mao was the quickest to get into, as they allowed more people around, whilst - oddly as he was the last to die - I think that he looked the most fake of the 3, and also somehow didn't seem to have any feet. All I need to do now to top off my set properly, is add a couple of not yet dead commie dictators (Gaddafi, Thatcher, Castro) and most of all, the Glorious Leader. If i can talk the North Koreans into that one, I will be a happy man indeed. And probably one much wanted by assorted other groups around the world, but nothing new there.

It has sadly come to my notice that certain people who should in no way know about this site have been reading it. You know who you are. Please stop it, now. Or if you insist on this unsolicited viewing, please don't use any of the information in it against any of the theoretical people (i.e. mostly me) who may or may not actually be real and appearing in the said page. 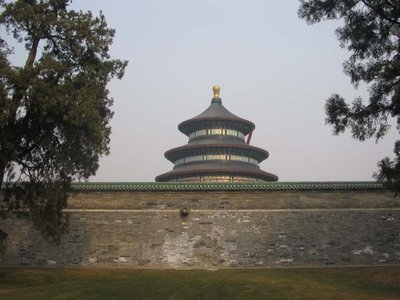 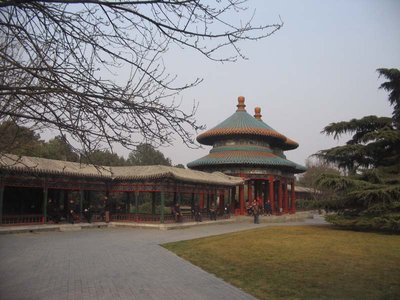 I also went to the Temple of Heaven, slightly disappointing as the main temple - like much of Beijing - is under reconstruction and closed, although the gardens were large and very pleasant to wander around in, an Oasis of calm in the chaos of Beijing. I tried (mostly unsuccessfully) to prevent Erin's family from buying the entire silk market, went for duck (Mmmmmm. Duck) and also to see the famed acrobats with them (a good show, although the number of performances the girls made with crockery was scary, and there had to be a message i there somewhere). 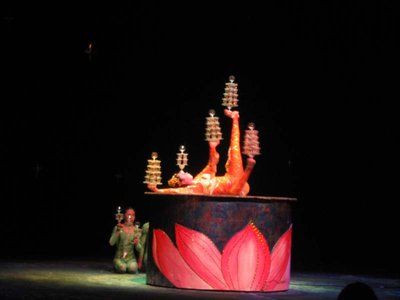 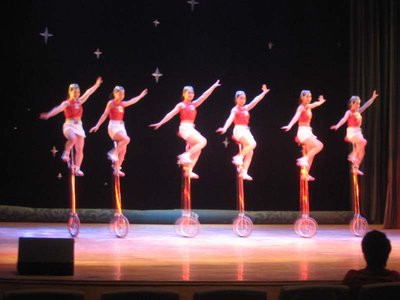 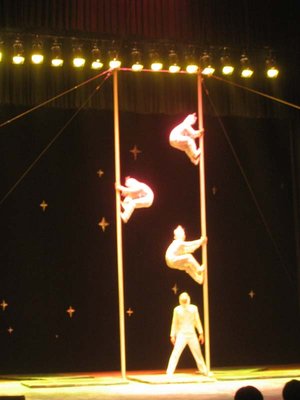 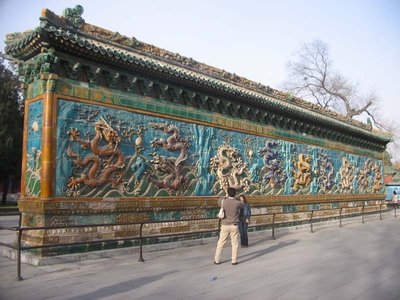 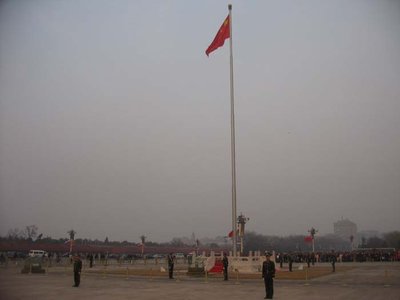 Trawled the markets, saw the flag lowering ceremony in Tiananmen Square (Bollox was I get ting up at 6am for the raising) went back to the Lama temple, got hold of some Lao visa's, went to a jazz club to watch a great American group with a blind drummer, plus a club refreshingly full of Chinese people, and i took a stroll through Beihai park, again lovely, and again with the main temples under reconstruction. 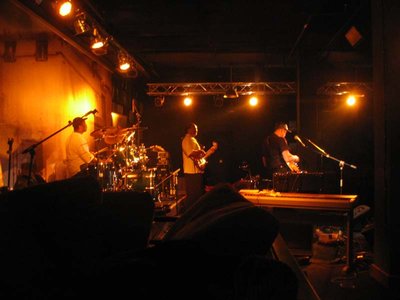 Since I was last there, barely 2.5months ago, there have been new buildings and skyscrapers, hutongs have been demolished, my favourite restaurant and street food stalls have gone (although that didn't stop me eating as much of it as i could source from other places)

And in between all that, I managed to continue my jinx on Phil (in December his motorbike had died whilst on his way to meet me) by killing his bicycle, and snapping the key in the lock to my hostel room on two separate occasions. Great. And as always met my share of random travellers and those not quite with it. Two mention just two, a French guy picked up a Chinese girl when in the club, was taken to a fancy hotel by her where they got a room which she paid for, and then she slept on the floor with nothing happening to his bemusement. And a Canadian guy, who after wandering around naked one night, went to bed, got up and fully dressed, went and showered, took all his clothes off, wandered around naked again dripping everywhere and then back to bed, before pondering why his mattress was slightly damp. You really do meet all sorts travelling, and in hostels, and that's what makes is so much fun!

The 40hour train journey was uneventful, and even Erin (longest previous trip, about 12hours) enjoyed it, although it was tempered by the sight of a dead man lying on the railway tracks after being recently hit near Changsha. Hmmmm. Not good. The scenery further south though, after Ruili and into the darkness of the second night was wonderful - terraced farming in the hills, rolling valleys and patchwork fields of multiple colours. Lovely.

And so to Kunming for the third time. And good it was to be back. Spent much of the time just wandering, met up with a a couple of interesting fellow travellers, Simon and Soloman, did a load of chores, tried to convince chemists that Erin wanted Malaria tablets and not that she actually had malaria, finally visited the two pagodas missed first (ad second) time around, and enjoying the clean air after time in Beijing. And also the speed of change. Since my last visit, chunks of the city have been closed down, all the street food vendors have gone, and even the old market streets are close to the edge. Indeed, we walked through the bird market at about 3pm and a wall was starting to be built, and again at 11pm and it was entirely built. The wall is about a foot in from the shops, and when all joined up, means that the entire block will be closed off, and shortly afterwards, demolished. Scary, and very sad. Especially when there are lots of billboards asaying things like "Remember historic Kunming". Sure, you have to remember it, because it will have been destroyed before the month is out.

Sure, the construction and development of China is scary and impressive, but it's very sad that so many of the great old areas are being destroyed. Hopefully somebody relaxes their potential in time, before all of their historical legacy has been lost. 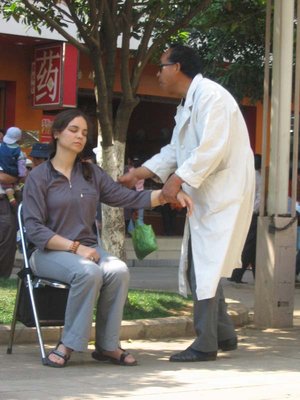 Getting a street massage from a blind man in Kunming

View inside a Chinese night bus

We headed down to Xishuangbanna, a semi autonomous province in south Yunnan, on the overnight bus. One of the things I love about travelling so much is when I get to introduce other people to random experiences and introduce them to the world etc whilst watching their reactions. To me, the journey was entirely routine, and the driving was serene and perfectly calm by even normal standards, let alone average Chinese ones. To Erin, it was a 14 hour death ride in which she was utterly convinced she was going to constantly die.

Culture Shock is a strange and fascinating thing.

In fairness, this thought probably wasn't helped by the fact that about 30mins after daylight, we stopped to collect an extra 35 odd passengers who squeezed onto our bus because their bus had crashed. 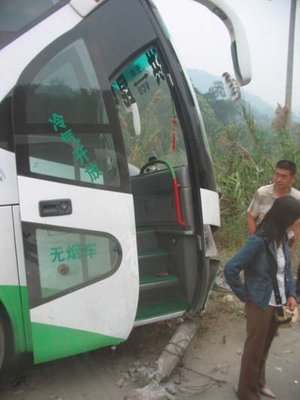 The crashed night bus that we came across. It doesn't even look that bad from this side...

Mrs. King, don't worry. China is fine. It's the rest of Asia - and most of the rest of the world - where the driving comes anywhere near insane and survival chances are at best about evens. And seeing a dead body and having a near death experience (which really, it wasn't) in 48 hours or so really are just par for the course. I know I have a reputation for sometimes being in the wrong place at the wrong time and dodgy things happening, but I swear it's not my fault. And really truly and honestly, it really isn't any more dangerous than being in Detroit.

In Jinghong, we stayed in a Dai style hut on stilts which was really cool, although odd because it was in a courtyard in the middle of the city surrounded by concrete. Jinghong is a nice little place, and we explored by bikes. We went across the Mekong, looked at a market looking for food to try (Erin: what is that over there, it looks really tasty. Me: Erm. They are called socks...), wandered around a lovely local park, saw more Peacocks in one place than I've ever seen before in my life, headed through the fields into the lovely Dai countryside, wandered around town, found Banna Paradise (what would have been an amazing resort built around lakes etc, but is now a sad old crumbling mass and with a 4 lane road bridge dissecting it) and topped it off with the moment when less than 60 seconds after Erin muttered the words "I think my peddle is coming loose", she ended up with a crank falling off....

I know that I'm occasionally sometimes jinxed when travelling, but I'm beginning to think that I've more than met my match here. The border crossing could be interesting, to say the least.

Erin feeding the peacocks, and me with my bike in a field, shortly before Erin lost a crank

And on that note, tomorrow at about 7am, we leave Jinghong. 5 hours later, we should be in Mengla. Theoretically, another 2 hours later in Mohan, on the border. And another maybe 30mins, potential food stuff issues and sh1t happens issues aside, we'll be in Lao.

More from there, or when I'm out of my Chinese customs jail cell.

Posted by Gelli 20:44 Archived in China