Note to Self: Never take any food stuff across any border...

Leaving Ho Chi Minh to get to Lao should be a relatively straight forward trip via Hue to Savannakhet, in maybe 30hours or so. If you don't have to go via Beijing, anyway. And thus it was that I embarked on a mostly uneventful and entirely routine (by my standards) 5 night journey. Cunning perusals of railway timetables meant that I got 5hours in Hue at a cost of only 50mins in HCMC, which gave me a chance to stretch my legs and get some food which wasn't the same meal served to everybody on every train in Vietnam.

A second night took me up to Ha Noi (cunningly planned so that I didn't have to spend a night there), where i got tickets through to Newport (sorry, Nanning) dead easily, and with time to kill and a bored ticket clerk who seemed to unfathomably like me, managed to haggle the ticket down from 560,000 to 160,000. I'm sure that shouldn't happen. 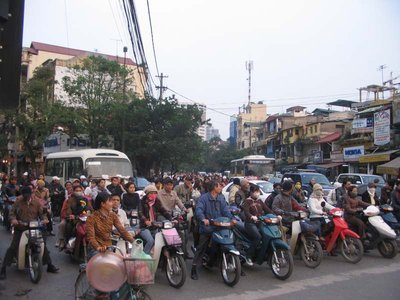 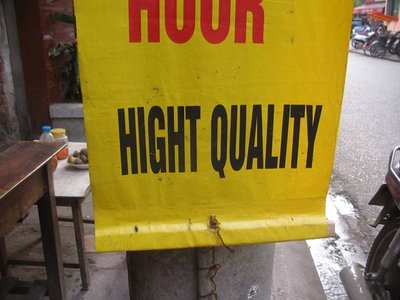 A typical view of traffic waiting at Ha Noi traffic lights, and a classic sign...

10 hours or so free wandering around Hanoi and doing some chores, was followed by a 4.5hour trek to the border at Dong Dang in a natty and noisy 2 carriage train. It was at Vietnamese immigration that I had a little trouble. In this case it wasn't suspicious articles which got me in to trouble, but rather bent Vietnamese lacking supplies. I suppose it's my own fault. Not in any hurry, I waited until near the end to go through the immigration control, and then customs. Here bags go through an X-Ray, but you personally don't (this is standard on much of my trip. Basically, if your trying to sneak a gun or something evil and metallic through, keep it in your pocket...).

However, the carrier bag containing two bags of good Vietnamese coffee - bought in Hanoi as a gift, and as supplies, bearing in mind the Yunnan excepted terrible state of coffee i China - caused much sudden interest. If I'd repacked my backpack and put it in as I had planned, I doubt there would have been any trouble. But it seems that the coffee supplies at the border control had run out, and seeing the coffee, an enterprising guard rapidly talked to his fellow officers, and with me now last baring a couple of locals (quickly sent through before me) was succinctly told that I either give up the coffee to them, or they would detain me due to customs violations until the train had left, before profusely apologising for their mistake. As the train only runs twice a week, I would have been stuck in No mans land 25km from the Chinese post (which was also shut for another 8 hours). When the guard came to enquire if the train should leave, with no option baring to walk or rough it out all night and try and hire a taxi/hop a bus the following morning, I gave up. Left them grinning and with some excellent coffee, and me cursing Vietnamese Conn artists and the country in general one last time.

Despite everything, I did get the liquorice back.

I'm not sure that i've ever been so happy to leave somewhere, and it feels very strange. Chinese customs/immigration were straight forward as they always are, although timezones, timetabling and over enthusiastic Chinese staff meant that everybody was awoke barely 90mins after leaving Pingxiang in preparation for Nanning. An hour away. In Nanning, I stunningly managed to get a ticket leaving that night from an scarily empty ticket office (unsurprisingly, the ideal train was fully booked). I then left the station, and using an underpass crossed the road, where I immediately heard a couple of my favourite classic Chinese pop songs, and realised that I really had missed this country allot.

It's good to be back.

I somehow managed to kill 12 hours in Newport without getting too suicidal (it really isn't the most exciting of Chinese cities), and from there it was a simple 2 night 36hour trek back to Shangers, and a well needed shower... 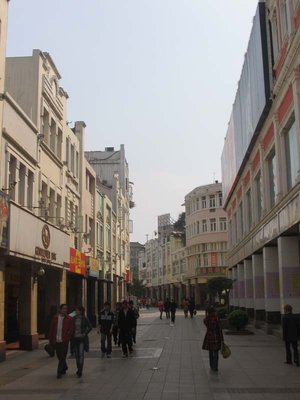 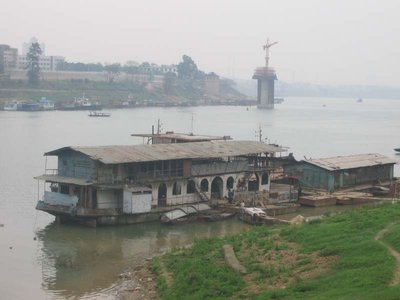 Newport (Nanning) High Street, and view over the River

It was very odd being back in Shangers. Despite being gone a good 7weeks or so, there were still familiar faces in the Hikers. Helen and Dennis were back again (they'd been there before Christmas as well as New Years), the entrepreneurial Jay was still knocking about, plus a couple of randoms who i recognised from previous trips. Jimmy (who'd climbed Hangshan with us) was also back, as was Paul who had left HCMC the same time as me, and despite flying (twice) had taken only 16hours or so less time (I'd even left Nanning a day before him it later transpired), and paid a good chunk more.

And the following morning, after a rowdy if not entirely perfectly Irish (we got a bottle of Jamesons and some beers, but don't get conned into drinking Guinness foreign extra. It's not worth it), Ivan the Dane, he of Shanghai, Yangshuo and Guilin, randomly turned up again after 6weeks back in Arhus, Denmark. It's like an old pals act here.

Shanghai's vortex was working yet again.

Spent a couple of days on chores, drinking, catching up, a little bit of strange work stuff (don't ask, the Russians were involved) and randomly being, and then tonight head onwards to Beijing, a full week after leaving HCMC.

When I get there, I'll even be slightly over halfway to Lao.

Posted by Gelli 23:25 Archived in China