The bit where it went wrong

I've decided to just gloss over the next few days. Please don't ask for details, as you wont get them. I also don't need an outpouring of standard comments (please don't be offended) to be added. The only reason I decided to add any of this is so there isn't a hole in my future story, and to show that despite all the great things about travelling, real life has to go on, and consequences met.

This won't be a pretty entry, so you may as well gloss over it, collect 200 as you pass go, and read the next one.

Although Nha Trang probably isn't all that bad, it was undoubtedly the worse few days of my life in many years, which obviously would lead me to be not desperately objective.

In fairness, the beach isn't at all bad. We caught back up with Paul (and Chevy). The weather was excellent, with the first serious heat and sustained heat we had experienced since leaving Shangers. Had some fantastic seafood. The Island boat tour is very good (and would be even better if you could swim, and thus take full advantage), and the place is probably one of many people's favourites. Nha Trang is basically very touristy, and to me it's a really depressing version type of Club Med place. Large numbers of mostly drunk and loud stupid young white people, all of whom generally end up in the same couple of places which are basically beachside meat markets. I know many people love those type of resorts and holidays, but it's just not me under any circumstances. 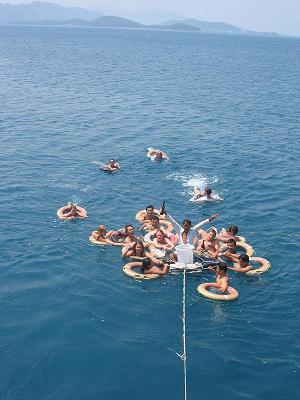 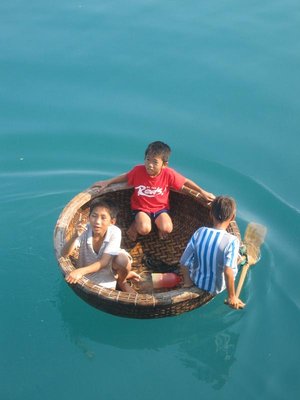 The floating bar, and local kids in a small ring boat, on the boat trip around the Islands

It's also somewhere which attracts local opportunists. As well as meeting a number of people near the beach at night who were very definitely out to steal/conn everything from stupid drunk white people, Tania just about survived an bag snatching, ending up on her backside being dragged down the road by a motorcycle who's passenger had made an attempted grab her bag as they whizzed past.

I know i'm probably being significantly over harsh, and many people like those places, but I have a mitigating circumstance. 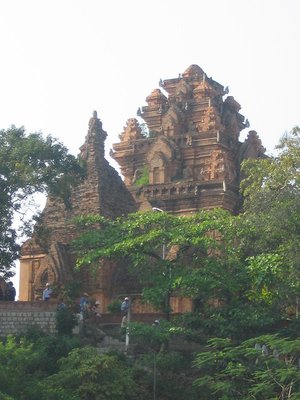 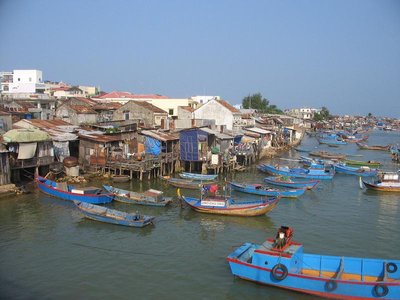 In the course of 3 emails (the contents etc of which are known to only a few of those also involved, and it will be kept that way - Please don't anybody go asking for any details. You won't get them), my life in Europe utterly utterly collapsed. Words can't really explain how I was, although I was deep into the zombified "Holy sh1t this is by far the scariest thing that has ever happened" stage, if not deeper.

As a way of quantifying just how scared and screwed up I was (and I am aware that casual readers will have no idea of the significance of this) I booked the first flight I could get back to Europe. It was for 3 days time, and I was gutted that i couldn't get anything sooner. Oddly I didn't even have the kind of demented energy I often have in such situations (where i'm told it's not possible, especially with Travel) and didn't even bother to argue with the agent or look for myself as I normally would.

Whilst I waited for news of anything, I made the mistake of trying to be as sociable as possible, which was obviously wrong.

Sometimes I really am stupid and need to be whacked a few times for some sense to penetrate, although in mitigation, I wasn't exactly thinking straight anyway. There was no way in hell I was going to manage it, and it just ended up with my moroseness and zombie type condition affecting everybody else's holiday. I am a private person and keep all things to myself as far as possible, often going to extremes. I always have. I suppose it's my defence mechanism. I don't care if people pay any attention, or care in the slightest what's wrong, providing they accept that I am having a problem and leave me to it, more or less. But it mean't that nobody knew what the hell was going on, except there was this morose and grim t0sser seemingly hell bend on driving evrybody else down to his level of depression for no apparent reason. Not surprsingly, it wasn't a good situation, and things weren't pretty. And on top of everything else, I managed to kill all the good times from the past few weeks and almost certainly any chance of longer term friendships with agroup of people who's company I ghad really enjoyed. They got increasingly annoyed with me, and I was getting frustrated with them getting annoyed at me. I finally realised that and before things could escalate on that front as well, I gave up and did what I normally do when I need to think or am having a bad time. And what i should have done to begin with.

I b*ggered off and I walked. Like a zombie with my headphones in. I've no idea where or how far I walked in the next couple of days, whether I ate or not, or what I did. Frankly i'm amazed that nobody pickpocketed me or even stole all my clothes, as there is no way i would have noticed. The fact that I didn't get hit by a car or motorbike is solely down to the skill and practice of Vietnamese at avoiding people. The only thing I did apart from walk was make phone calls, and I spent a chunk more on calls that I probably will on everything else inclusive in my entire time in Vietnam, and then some.

Late on the third day, against all odds, I amazingly got the news that the really really scary one was over with a supremely unlikely happy ending. I turned from a morose zombie to a gibbering wreck on the spot. I had so burried myself expecting the worse and preparing myself that I lost it when It turned out to be good. Euphoric wasn't the word. Things were not solved, but the worse case scenario was out, and that was all that mattered.

By then, I had no idea what to do, how to react (everything else was still going on, and news there wasn't as good) and had managed to completely alienate everybody I was with. Yay. Go me. I figure that in those really dark situations you find out allot about yourself and those around you, and i'm not entirely sure i liked any of the realisations that I came to. And that one will run and run in my head for a long time.

After more phone calls and some confirmations, I decided to delay the flight by 3 days, awaiting developments and further news. And returned to being a gibbering walking wreck.

It was time to go alone and just be.

Even before i had got to NT, and everything had happened, I had realised that I was breaking my own rules and it was bound to implode. Helene and i had been traveling together too long without any time apart at all, and especially after Paul had flown out, I had realised that I needed a couple of days away before any tensions got to the point of us killing each other. This is no reflection on any of us, rather just a way of life. Spending 24/7 with people is unnatural and gets to everybody at some point. For myself (a solo traveller by nature), 6 weeks in constant company of the same people was too much and I just needed a couple of days doing something different.

It was a natural parting of ways. Richard was hanging around for his PADI, Paul had been in NT too long and left for Mui Ne alone, Chevy was enjoying NT too much to leave and the girls were sticking to their original plan of heading to Mui Ne and a beach hut. The previous few days had obviously taken their toll on everybody (for which I can only continually apologise), and the dynamic was kaput. I was obviously affecting everybody else, and ignoring all other factors, I needed to be alone and this was utterly reciprocated as everybody else needed to be away from me!

Much though I had wanted to go to Mue Ni and rent a bungalow on the beach for a day or two (i've never been anywhere where thats been possible before, excepting Sidmouth which is a bit different), I was running out of time in Vietnam anyway - my extended visa and other commitments (assuming I got that far) meaning that I had to leave Vietnam, by the 19th.

And with me really wanting to visit Da Lat, the decision was made. It was a no brainer and the first easy thing i'd had to do all week.

And no. You can't have any details, I'm sorry. This is between those it's already between and nobody else. 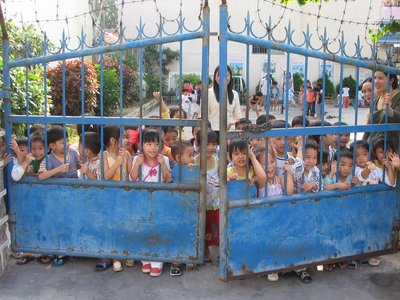 Posted by Gelli 00:00 Archived in Vietnam

I don't want any details.
I only want chocolate. :P
:*