Which idiot went and moved the promised land?!

And so to Yunnan. Kunming, city of eternal spring (apparently) and bin lorries (garbage trucks) and road sweepers which constantly play "Happy Birthday".

Kunming felt positively un-Chinese, it was odd. The sun was out and it was finally beginning to warm up a bit. Was this finally the promised land? Was the search over? Perhaps.

After a 40min walk to the hostel (Honestly. These people have been traveling with me long enough to realise that I like walking, and so if I say lets walk – bags and all – and they agree, they deserve all that’s coming to them), and a faintly ludicrous and heavily drawn out check in procedure (you are given a form to fill out, and then the clerk immediately goes and refills the same form with the same information, just so it’s in her own handwriting), we took advantage of the Camellia Hotel’s great breakfast buffet. I don’t often give specific recommendations to places, but if you do happen to be in Kunming – as I know many of you are on a regular basis – the hotel breakfast buffet is great value. Just don’t let them see you smuggle food out…

We then took care of the crappy yet necessary admin stuff (applying for 2 Vietnamese visas, and a Chinese visa extension. And no, not each) and with that, could settle down to being tourists. The Golden Temple Park on the outskirts (former site of world Horticultural show 1999 or some such, and including a death slide) was fairly interesting in a temple way, and a pleasant-ish way to spend a couple of hours. We got utterly lost in the flower garden trying to get out of any exit (there turned out to just be one, with lots of promising looking dead ends), amazed by the size of some of incense sticks burning, and tried to avoid – some did – being conned by the priests who read your palm, and which should probably have included a comment that they foresaw an imminent loss of some money… 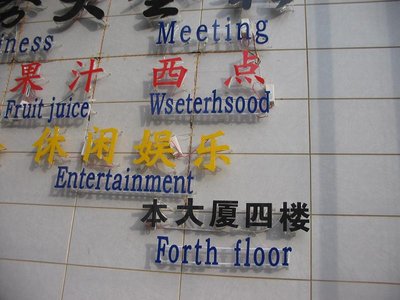 Back in town, whilst Paul went to sleep, we wandered around the old Muslim areas of the city and markets. One of the things I am a real sucker for is street food, and I can happily confirm that Kunming has a great selection, ranging from Pineapples on sticks, to some wonderful fried and spiced tofu balls, with about everything you could possibly list in between. Yunnan coffee (and indeed tea, which is strong but exquisite) is fabulous, especially in a country which isn’t a big coffee drinker, and of course topping up of caffeine levels had to occur. The street market area was great as well, if mainly for the array of utterly bizarre shop combinations. I don’t remember all of them, but do recall that the shop selling kids shoes and assault rifles was my favourite!

Cuihu Park with it’s lakes was lovely, and the University area to the north of it was a heck of allot more attractive than most I have seen (Gipsy Lane, it wasn’t), and also had a small area of really bohemian style shops and restaurants. Central Kunming was very odd. It’s obviously changing extremely rapidly, with chunks of it being pulled down and rebuilt, but it leaves an interesting picture. You get to wander down some dodgy looking decrepit back alleyways, seeing real life in progress, before reemerging in the centre of a major pedestrianised shopping arcade. Which is probably best described (perhaps) as a cross between Rotterdam and Bristol. For those of you that have never been to either (or Kunming), tough. 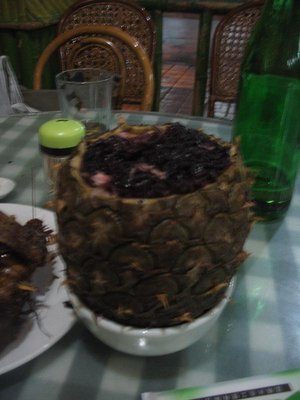 That evening we gained an American friend, and headed to try some of the local Dai food. Being SW China, the indigenous people are Dai’s instead of Han Chinese, and the proximity of the Burmese, Lao and Vietnamese borders has also had an influence on the local cuisine. I know I’m talking allot about food these days, but god damned it this is good stuff. Purple sticky rice in Pineapple (i.e. in a hollowed out pineapple) could have kept me in Kunming alone for months. And then I saw the price of room rental, and very nearly did. Some evenings happen entirely by accident, and this was one of them. On our way back for a few quiet drinks, we happened to come across somewhere with jars of local spirits in the window. Discovering that they were 4RMB each, we decided to try 4. We didn’t expect to receive 4 half pint glasses. They were, urm, potent, and shall we say, interestingly flavoured… Being 4 at least semi-alcoholic travelers, we couldn’t really leave them, and there was no way in hell that we could down them (a tiny sip of any was enough to scare us), so we ended up staying. And invented a card game to help. We originally agree to go after we’d passed 1/3 of the way down each glass, but somehow managed to get through all of them in the following couple of hours. How the heck we managed that, I have no idea, and never will have. 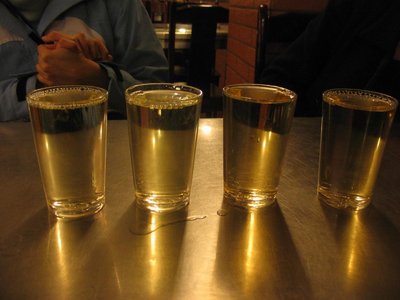 Dali railway station isn’t actually in Dali at all, a fact that we only realised in a taxyi at 5.30am when we left the station and immediately got on to the highway out of town into the pitch black countryside.

On the plus point, and although not the most salubrious of accomodations I have stayed in, the 15RMB we paid each for the room (about 1.07gbp) were the cheapest I have ever paid for accomodation in my life.

Dali was lovely. I had kind of expected it to be another version of Yangshuo – pretty and well sited, but very touristy and set up as a kind of backpacker heaven, but whilst parts of that were true, it really wasn’t. It was several times larger, and though it did have a few obviously touristy/backpacker bits, most of the town seemed authentic and normal Chinese by far out numbered white travelers, and those who’s jobs seemed to be to solely get business from the said travelers. 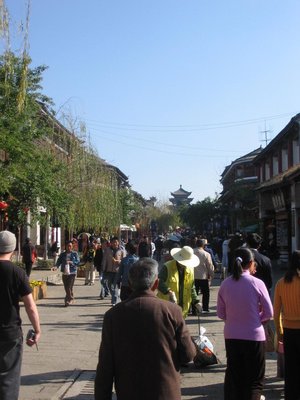 It’s a great place to just wander. The walled city is large enough, and contains enough curios, back alleyways and traditional houses etc that you can easily kill a day or so doing nothing else. From one of the gatehouses, you can see the lake, only a couple of km away inviting you to its shores and water, whilst from almost everywhere you could see the fantastic mountain ranges just behind the town. Not desperately tall, but pushing 3000m, they are the tail end of the Himalayan range.

The weather was wonderful, if slightly chilly when the sun went down behind the mountains, and perhaps it almost was the promised land at long last. Together with the most amazing African American woman in her 40s, plus a German engineer, we had a Dai banquet. A once a week (admittedly tourist aimed) extravaganza of a long succession of stunning Dai dishes. Dai cooking is thus far definitely at the peak of my culinary rankings from this trip. The town by night is almost even more bewitching than during day. They have worked out the lighting to perfection, with a full moon and clear sky, and it just felt right wandering around with all the locals doing not allot. Although one close encounter with a firework, let off by an overly enthusiastic local which shot unexpectedly into a shop, whacking the assistant in the shoulder before embedding itself in a glass display case reminded us that we are still in China… Although completely different, it reminded my allot of Hvar, Mostar and Sarajevo at night from the beginning of my trip. And due mostly to it’s name, and our Shanghai – wherever trip being themed by stairs and monkeys, we ended up in the Bad Monkey. 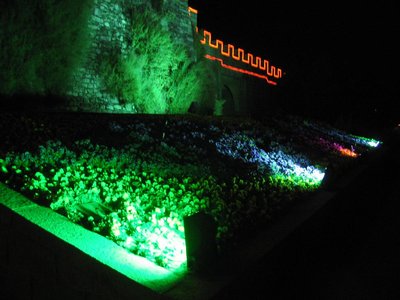 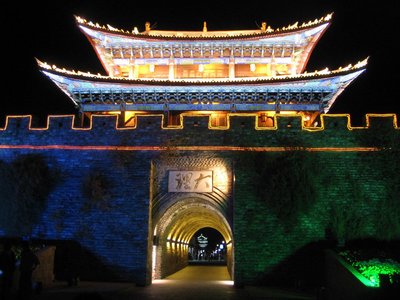 It was at this point that my body started to object. I’d barely managed to sleep in about 5 days, and despite a long night out, a couple of walks designed to try and tire me out and hot and cold showers, I wasn’t good. My gut was also starting to react in a big way (perhaps Dai food isn’t quite as amazing as all that…), and all I wanted to do (please excuse live altering information here) was to sleep and sh1t. I couldn’t do either, then couldn’t even keep water down, and then promptly went from not being able to sh1t to having to live on the toilet. Lets just say I didn’t have a good or productive couple of days. Apparently though, there are several really cool places near Dali, plus obviously mountains to climb and a lake to enjoy, which I will have to return to take advantage of. 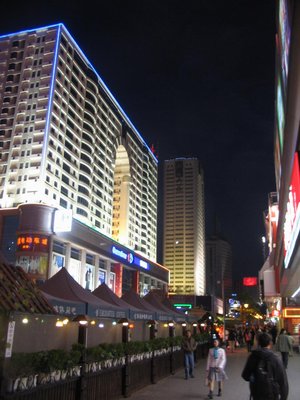 Returned to Kunming by bus, along a 350km double land highway including several long tunnels and bridges, but which was almost entirely empty for the entire way, took a peak at the Chinese interpretation of Valentine’s Day (very westernized, and strange), collected our assorted visa’s – although mine included a crazy taxi ride involving a head on collision by two motorcyclists directly in front of us, and the hugely annoyed taxi driver who jumped out yelling and threw one of the motorcycles across the road (into another taxi, who’s driver and passenger were, shall we say, vocal in their unamusement), before shooting off at the speed of light, which seemingly so riled him, that he forgot to charge me – got some tickets and got the sleeper bus south to Hekou. 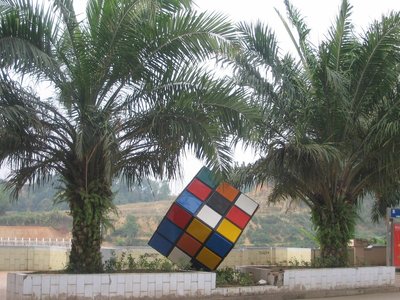 Modern Art on the river front near the border in Hekou

Posted by Gelli 01:43 Archived in China