No crickets and F*ck varrying levels of carbonated water...

One day back in Shanghai, I got talking to a recently arrived Englishman, Mike, who was recounting his recent winter crossing of Russia and Mongolia. 4 of them had been couped in a train for 4 days straight, and had come up with the f*ck list. Some of which was recounted, and much of it made my hugely nostalgic for Russia. Such as fuck varying levels of carbonated water. If you've never been to Russia,it means nothing. If you've been, you know exactly what is means. In brief for the uninitiated, opening a bottle of water is an event which could be a non entity, or the equivalent of being savagely attacked by a demonic jetspray. You just never knew what. Apparently the entire f*ck list will be online at some point, and i will be sure to add a link to it then for the enjoyment of other former Russian travellers, although it will likely pass most others by completely.

I had come back to Shanghai for maybe 3 or 4 days to be a tourist, as i'd not managed to see anything much on my first trip through before Christmas. 3 or 4 days has since turned into an unspecified open ended period of time (i'm still here) due to assorted circumstances.

Somehow on nearing Shanghai station, I twisted very slightly moving out of someones way and felt a twinge in my back. It rapidly got worse, and 2hours later I was lying utterly prone on my bed in the hostel, and wouldn't manage to move again for about 48hours. The most I managed was a couple of trips to the toilet (about 6metres), which took over 4hours each to physically accomplish. I was not in a good way. A couple of weeks later, and i'm still moving more gingerly than i should be, and feeling it, although I am at least moving around. The other big issue is Chinese New Year. Basically, unless I wanted to go to Beijing (nobody goes home there), I wasn't going anywhere. Trains and buses are waaay over booked due to people trying to go home for the New Years celebrations, so I was stuck in Shanghai anyway. And I wasn't the only one. Many desperate attempts were made to leave by an assortment of people. Some even succeeded. Most didn't and are also stuck here, meaning that they are a motley assortment of long termers knocking around and we're making the most of it, and it's certainly not been unenjoyable. 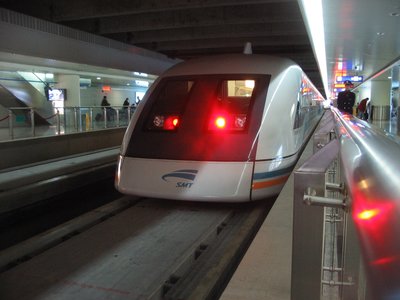 The Shanghai to Pudong Maglev train

Despite being mostly lazy, a couple of evil (unconnected) nights due to food poisoning - and i haven't been the only one - and the back problem, I have actually managed to see a chunk of stuff. Have wandered the Bund and main drag, Nanjing Road, regularly. I've been up the stupendous Jinmao tower, one of the worlds tallest skyscrapers to take in the view, whiskey in the piano bar, and stare down the stunning Star Wars style hole through the middle of the building which is not for the faint hearted or vertigo sufferers (i.e. me). I entertained the geeky transport idiot in me with a return trip to Pudong airport, in order to try out the maglev train. At 430kmh, the fastest train in the world, and being a non flyer, the fastest I have personally ever been. It was the most fantastic acceleration, meaning about 2minutes into the journey, we had hit top speed, although the journey was surprisingly bumpy.

Looking down inside the Jinmao tower

Took a wander around the museum of communist propaganda (i can never say or type that word with going into a burst of "Duel"), the gallery of modern art (very cool) and museum of planning and construction, which basically showcases what Shanghai will be like by the time they host Expo2010. And these guys are not messing around. Most cities in China resemble building sites, but Shanghai seems to be taking its transformation to extremes, both in scale and time frame. The metro, for example is being extended to the tune of over 270 new stations on a dozen or so new lines. All within 5 years. Plus a new container port. On an island. Connected to the mainland by bridge. A 46km long one. The worlds tallest building, the Shanghai World Trade Centre, is due to for completion next year (although it won't be the tallest for long) and a few other biggies will also go up. Come back to Shanghai in 5 years time, and it will be virtually unrecognisable.

I've wandered around the Jade Buddha Temple (i like it) and the Jingan Temple (less impressive but fine), had a price of Guiness which made me wish I was back paying Swedish prices, and a foot massage and just wandered. More than anything else, Shanghai is a place designed just to wander. Very few must see's and do's exist, but i could happily spend 6 months here just walking at random, and never get bored, or even see some of the same things/places twice. People watching is imense, street markets and pockets of real Shanghai are everywhere, whilst the state of constant flux and construction means that things change rapidly and are often expectedly unexpected. The exception to wandering is the metro. Clean, quick, efficient, and rapidly expanding. With a but.

But, due to the moronic nature of the Chinese psyche in certain aspects, the average station stop turns into a free for all as people barge on to trains without even vaguely considering the concept of letting them off first. People falling over are common. Trampling is not uncommon. Fist fights are expected. And without exception, some poor buggers trying to get off get trapped in the train as it speeds off. Carrying a golf club or iron bar is a very desirable option. Now when I try to get off, it's a case of elbows out and take no prisoners. It's very un-British, and i've sent any number of people to the floor which is regretable, but unavoidable. Otherwise, you don't get off, simple as that. It's sheer chaos.

The hostel is now mostly overrun by English guys and Scandinavian girls. Two groups of people i don't run into all that often. It's very strange. I've caught up with Helene (from the previous time around) and kind of relived my youth by sitting in a park on a sunday, drinking dodgy red wine from the bottle whilst watching a group of OAPs happily ballroom dance in the freezing cold, Lun (for some reason, we seem to end up drinking the odd beer and ending up in strange places when we meet. This time I ended up in a random part of town, having lost my phone and being locked out of an appartment in the p1ssing rain at about 5am) and Reevesie (Vladivostock, who ended up forced to fly out when the boat wasn't there, and has spent 3 months circumnavigating the globe on a ship teaching English. What a fantastic job), and came across a load of new faces, as you do. More on some of them to come in future installments.

The other interesting thing is the astonishing number of travellers I have met who fallen for scams down the Nanjing Road. Sure, you get people trying to sell you watches, bags, DVDs, drugs, women et al, but the vast majority of guys seem to have fallen for a coffee shop scam. Some local girls get talking to them, and aftyer a while suggest going for coffee. After a couple of coffees, and normally, whiskey (or even karaoke), plus a few bits which appear unordered,they then get hit with a whopping bill and told to pay up. 100euros, 100gbp, 100usd are common amounts, and a couple of Americans have been done for 800usd. Idiots. And yet, probably 75% of the males i've met in the hostel have been hit for it, and I can't comprehend why or how they managed to fall for it. Oh well.

All that is left really here is trying to avoid loosing an arm to Chinese fireworks, seeing the acrobats, Martinis in a poncey hotel and trying to see the damned cricket fighting. In no way am I proponent of animal cruelty and fighting, but I admit to being really annoyed that attempts to catch cricket fighting have so far come to naught. We've found the crickets, can even buy them (some of them are not small), but haven't manged to see them in action as yet. The mind boggles, but sometimes, you just have to suspend belief and experience local life.

Early next week, with luck, I will finally leave on the next part of the trek. Whilst not exactly how I envisonaged leaving, I've been conned (admittedly it didn't take long) into teaming up with another long termer, James (who's left twice, got stuck and come back), into taking a road trip, climbing a mountain and attempting to cross China entirely on local buses. It should be really great.

But first, It's Chinese New Year.

Posted by Gelli 03:05 Archived in China