Who stole November 2005?!! And the story of the most amazingly fabulously spectacular fireworks display that you have even seen.

I really can't believe just how quickly things have gone. I really can't. It's now 2006, and i've been travelling since either the 20th April, or 13th May depending upon how you count it. And allot has happened in that time. It really doesn't feel anywhere near that long. But it's scary to think how quicky it's all gone. And how soon I have to actually return. Admittedly there are a few months left to go, but it's still creeping up on me with alarming speed. There's so much more to see and do, and so little time left to see it in and money to spend doing it. But i'm sure i'll come up with some cunning plan (or dip into the candy smuggling business) to keep me going for a whilst longer.

I suppose that some of you want to know about my New Years Resolutions. Ok, I don't really suppose that at all. And in fairness, they aren't worth it. My main one is not to make anymore stupid New Years Resolutions, which i probably actually broke within seconds because i made the resolution about not making anymore stupid New Years Resolutions. On a more normal note, I have resoloved that this year, finally, I will not get arrested, deported or shot at for the entire year. Actually, i'll take any 2 of the above 3, as I think managing all will be virtually impossible. That might sound relatively straight forward, but I've have been making the same resolution for several years now, and not managed yet, so who knows...

Hong Kong is really wierd. Crazily wierd. Spookily wierd. Everything is just so familiar, but completely different at the same time. Granted that it was British run until 1997, but even so, I was surprised at how familiar and almost comforting (yuk, i know) it seems. Stupid things, like the fact that all the road signs are in the same colours as in the UK and use the same font. Foreign looking people are speaking in English, and it's their first language (in some cases). There are white people, Indian people, coloured people all around, and yet you know that some of them are actually normal residents as opposed to most places I have visited in the last 6 months or so where they are either (a) backpackers (b) English teachers or (c) business people on assignment. And of course, many of the shops are the same. Sure, McDonalds and the Body Shop appear everywhere (except Bosnia-H. Dear god, please keep it that way), but seeing Marks and Spencers and Boots is a bit more random. 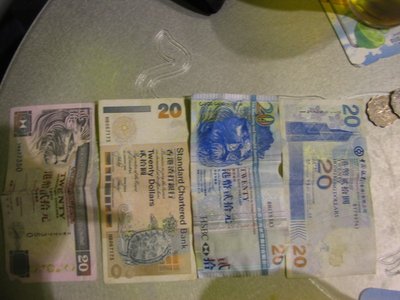 Assorted 20HKD notes. Every bank produces their own notes, meaning that mulitple designs of the same note are in circulation.

I stayed first in the Mirador Mansions, a neighbour to the infinitely more infamous Chunking Mansions on Nathan Road, in Kowloown. I can helpfully inform anybody that books the New Garden Hostel through the hostelworld engine (i.e. most hosel sites) that 99% of it's claims are rubbish (internet is not free, reception is not 24hour, there is a curfew etc), and the pictures are certainly not from any of the bits which i saw. And lets just leave it at that. 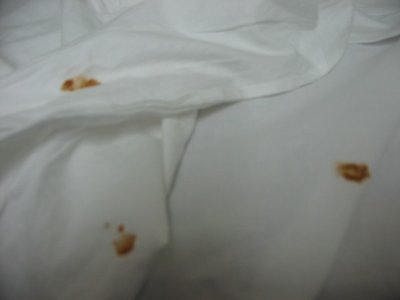 Spent a couple of days mostly wandering around HK island and Kowloon at random. Bounced around on the Star Ferry across the harbour, and on trams along Hong Kong Island, both of which were dirt cheap (about 14pence each). On the 30th, I hooked up with Jase007, of TP, and took a trip up the escalator entirely by accident. We didnt know that it was the worlds longest covered escalator when we started, just that we wanted to cross the road. To say it's the longest is a bit of a cheat as it isn't one contnuous one, but 28 or so flights of escalator later (including, oddly, one downhill stretch) and we arrive at a wall half way up the mountain. By that point we were expecting to see a wisened old grey haired man answering questions about the world truth, or at the very least, a crowd of people who had sone the same as us and were now wondering how the fr1gging hell they were going to get back down again. About two thirds of the way up is the self proclaimed last bar until heaven, which gives you some idea of it's scope. Went for a couple of drinks on Lan Kwai Fong, Hong Kong islands man drinking area, where we managed to order the only things not on happy hour discount, and then collected NikkiDutch (also TP, and who i'd met in Beijing as well).

I will say this now as a warning to anybody else entertaining the idea of meeting up with people they come aross online, espeially on travel websites. Meeting TPers can be bad for your health. With the possible exception of Lil J, all have been alcoholics, and with New Year coming up, things were kind of going to go downhill. And from there on in, it kind of became a mad 2 day bender.

Don't anybody say I didn't warn you if TP meetings ends up giving you cirossis of the liver.

I won't go in to much detail of the following 2 nights activities, mainly because none of us can really remember everything all that clearly. There was something about furry and fluffy, an entirely unintentional visit to a brothel (i think we were trying to find a toilet), a tall bald guy we picked up for no apparent reason, an astonishing discovery that you can get a draught pint of Tuborg Jul ol (Danish Christmas beer) in Hong Kong, which i've never seen outside of Denmark before, a long taxi ride for no apparent reason around Kowloon peninsula in which the automatic doors caused a slight issue, wall climbing to go to the toilet in a bush, a pint which was drummed off the table into my lap, a night spent in the wrong hostel due to 12 flights of stairs plus a band who we managed to get doing request songs, some of which i seem to remember were a tad on the bizare and unlikely side...

By the following night, New Years Eve, we had gained an American friend Andy, and things just went downhill. 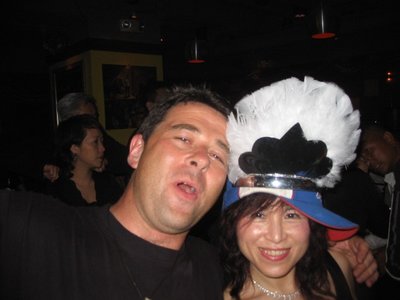 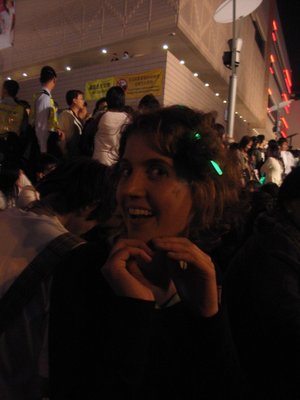 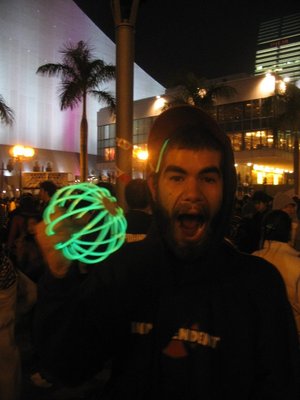 Spending New Years with these people (Jason and random local, Nikki and Andy) is not neccessarrily good for your health... 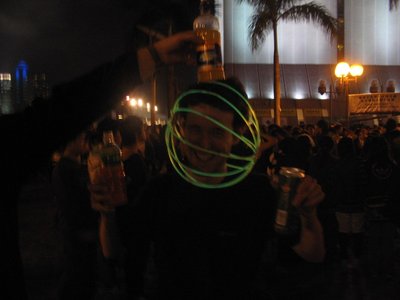 New Years Eve is always a strange night for me. They generally are a let down anyway, massively overhyped and normally involving huge entrance fees, plus in my case the sad memory of the death of my best friend Marc, back in 97, which doesn't always exactly lead to a great sense of mind. So i'm generally in a strange mood anyway.

Every day of the year at 8pm, Hong Kong harbour has a laser light show. Kind of fun, kind of cheesy, I admit, but assorted lasers and spotlights, plus 28 buildings changing colour whilst dancing to music (if your on the walk of stars in Kowloon, at least) is probably worth seeing at least once. And they promised a little extra on NYE. So out we sat and watched the show, with the added extra this time of a few fireworks. Enough to make it different, but not enough to be totally 'wow'. Afterall, a firework is a firework, and only the very best displays (such as those you always see on TV as happening in Hong Kong at New Years) are memorable. 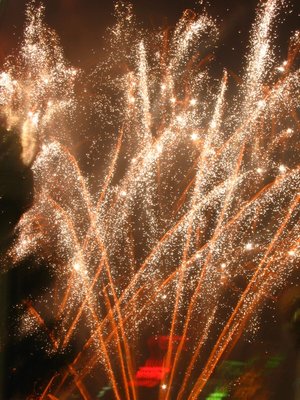 After the show was over, the crowd disperse until it was just us lot left drinking on the pavements. Took a quick walk through the strange one way walking system to kill some time, and returned to the front to join the thronging masses. It was somewhat surreal to spend New Years eve sitting on the dock in Hong Kong, with 500,000 or so others, eating Crackers and cheese, drinking 7-11 vodka/brandy and mixers whilst waiting for the fireworks show that you always see on TV and is the most spectacular one going, possibly baring Sydney. It really was oddly great fun. 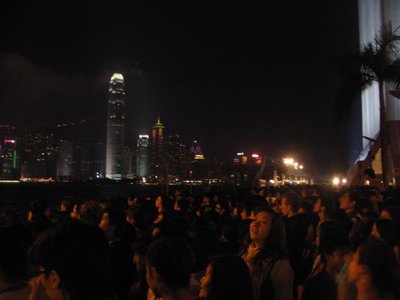 And topped off perfectly at midnight, with a HK island sky scraper light count down to 0 (with utter silence for #4, as that number signifies death in China) followed by.......
Zip. 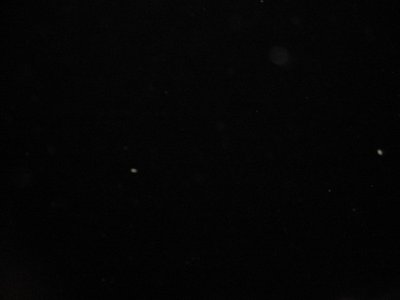 The Midnight sky on the turn of the New Year, Hong Kong

And about 15seconds into 2006, a single red rocket launched on the far bank, went up, puff into 3 sparkles, and that was it.

But the thing is, it could not heve been any better. It was literally perfect.

From there, it started to get messy again. At various points, we seemed to gain a number of green glowing light sticks, followed by 2 green glowing light balls (one of which just had to be worn as a hat, to the delight and laugher of every HK person we subsequently passed that night). Why Ialways end up wearing silly hats on any kind of occassion, and always to the delight of the locals is beyond me. Which might actually be no bad thing. We then also aquired some beers and a kiwi girl, a german girl, then more unlikely a group of 25 or so goths and some Policemen amongst others, before ending up back in the previous nights haunt for several interesting hours of draught Newcastle brown ale (something else hard to find outside it's home area), probable dancing and sheer drunken idiocy, some more strange masks and hats and some clacky hammers. And probably more furry and fluffy. I really can't remember. I do recall that Andy and I spent the night (or, rather, morning) sleeping first in a corridor and then in a stairwell, due to the previously mentioned lack of professed 24hour access and no curfew.

If anybody would have told me on New Years 2005 that a year later i would be celebrating by drinking vodka on HK harbour front with half a million Chinese people, whilst eating Crackers and Cheese and waiting for absolutely nothing whilst wearing a large glowing green ball on my head, i'm not entirely sure what i'd have said although knowing how these things work out, I wouldn't have not believed him.

And just to top it all off in perfect manner, we arranged to meet to go to an Irish bar for a big fry up brunch on the 1st only to discover that the pub was shut. It really was the perfect finale to an amazing, if slightly different New Years celebrations!

And now, me thinks, it could be time to dry out for a day or two. 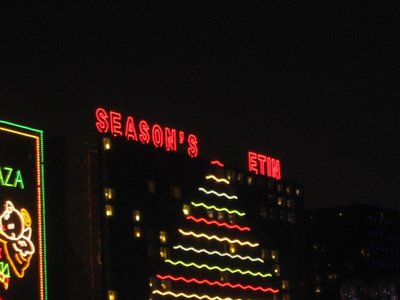 There's always one that has to spoil the festive fun by not paying the electric bill...

What in THE hell is on those bedsheets? A flower pattern? Colorful cockroaches? Tell me man! Tell me...I can't take the suspense!!!