Of motorcycles, massage and the luckiest CSer around

Twenty three hours to Guangzhou isn't really all that long, and the train was a good half empty. I took the opportunity to do some things sadly lacking. Sleep, and reading being amongst them. Admittedly the former was slightly harder, due to the fact that Chinese trains have music constantly pipped in to them between about 6am and 9p (lights out at 10), meaning that if you are on the top bunk (luckily, this time i wasn't) you get woken at 6am.

I hopped a bus straight to Dongguan, a city of some maybe 8million, in the huge Guangzhou - Shenzhen - Hong Kong corridor, and turned up at one of the biggest and most impressive bus stations I have ever seen. I was staying with a Quebecois, Jeff, a fascinating English teacher who had wandered around a chunk, and spent time in Serbia and Libya amongst others. Thats really travelling to teach English to enjoy it, as opposed to people running away from something or just out to make a quick pile of cash to clear the debts as many seem to be.

Possibly the luckiest CSer i have ever met, Jeff shares an appartmet with a almost constantly changing group of Chinese girls (9 at current count), who look after him. One, a lovely girl called Joan (or mama) plays the role of tribal elder, and the rest come and go. All are former students of his from Hunnan province, who have come to the Special Economic Areas and big cities of the Canton area, in order to find jobs. And there are any number of them scattered around area, working their own network.

A friend of Jeffs, Isaac, picked me up to head into town and hook up with Jeff for dinner. Oddly enough, I had never been on a motocycle before. Back of a tandem and snowmobiles, sure, but never a motorbike. And I must admit, that being driven around on the back of a bike, in a large sprawling yet obscure Chinese city by a huge friendly Ghananian, was not how I expected my first trip to occur. There was something somewhat comic about the whole scenario, and the picure of us certainly seemed to be very amusing to any number of Chinese drivers/pedestrians and fellow motorcyclists, who gaped, pointed and laughed in equal amounts. Another stupid first for me, ticked off on the trip. And the fact that we ended up eating Pizza (made with actual cheese. Anybody who has travelled or lived in China/Japan/Korea will understand the novelty here) in a Morroccan restaurant in China owned by a German didn't even seem particularly strange.

Not really the most exciting on entrants, this one, is it? You could just say that i'm wasting space. 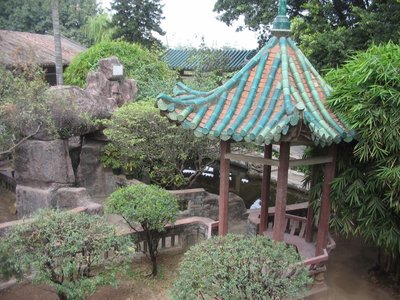 A small corner of the Kenyuan Garden, Dongguan

Got the most fantastic head and upper body massage that evening, which managed to more or less force my cold straight out of my system (these guys are good. And cheap), and the following morning went to wandrearound the Keyuan Garden, on of Guangdong provinces 4 famous gardens from the Qing Dynasty. A surprisingly quiet and relaxed oasis in the middle of the noise and chaos of Dongguan. Had some Chinese tea, and then i bought hotpot lunch for Jeff, Joan and 4 of the other girls at the little sheep restauarant (come on, it had to be) for a grand total of about 120RMB. Yup, a huge lunch for 7 people for about 8gbp. Great stuff. 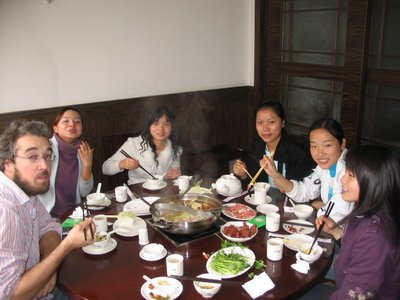 Jeff and some of his girls at lunch

And with that I embarked on a 3hour bus trip, across the border at Shenzhen for both departure and arrival without any incident, and down through the New Territories to Kowloon.

Feck me, i've made it to Hong Kong.

And still not been on a plane.

Posted by Gelli 22:37 Archived in China