The world of pretty toilets, and a postscript to the wedding

All we need now is a Harry Redknapp induced twist...

I had planned to just pass through Daejon, but that never happened. It was getting dark and cold, still covered in snow, and the alleged nearby bus station turned out to be a 45min slide away. At least if i break any bones in the ice here, i'm back in insurance coverage.

And so I undertook the not inconsiderble challenge of trying to work out which of the 300 motels in a half km radius from the bus station was not actually a love motel, so I could spend the night somewhere cheap and without too many optional extras. It didn't work.

Daejon seems much the same as Busan and Daegu but not as much so. Admitedly I didn't stick around all that long, but there didn't seem any point. I did stick around long enough to somehow whack my second toe on something (which I never worked out what as there was nothing to hit, turning it into a lovely red colour and making it twice the size, but without any of the surrounding toes geting touched, and I don't know how that worked). Instead, I headed out to Gongju, yet another extremely similar sounding "G" place which is yet another former capital. This time, one of the Baekje Dynasty, who were the rulers back in the late 5th to early 6th centuries, or so I would guess. I trawlled around yet another fort, this one cunningly built on the side of a hill and virtually deserted, meaning that it was a tad slippery with all the ice. Before anybody says anything or the sweepstakers start to pay out, I know i'm asking for trouble sliding along an icy castle wall, about 20metres up, and with only a semi frozen river below. Took a quick wander around the rest of the town, although the museum (and one of the main reasons for visting) was predictably closed. 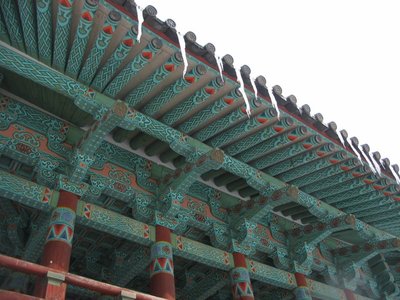 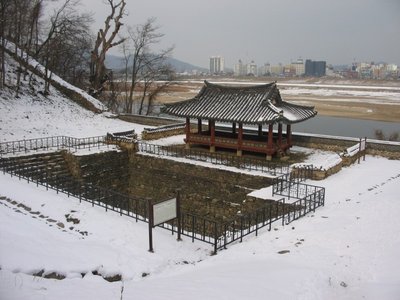 So I gave in, and got the bus back to Daejon. Although not quite how i intended. My suspicion was admittedly aroused by the number of buses heading back, compared to the number of those heading out, but i probably didn't pay enough attention and ask the right questions using my not entirely fluent Korean. And so it was, that whilst we did arrive back at a Daejon bus station, it sure as heck wasn't the same one I had left. It was on the opposite side of town. Waaaaaay away. And of course I had wanted to get a bus from the one I had originally left, to get to my days destination of Ansan. B*gger. After a little pondering, i did what any stupid Brit would do and cheated. I found a train station, and caught a train along the rest of the KTX new line to Yongsan in Seoul, instead of trying to get a bus across the city of Daejon. I just figured that it would be easier!

And so, entirely inadvertantly and annoraky that i keep up to date or even know such things, I added the entire dedicated high speed South Korean system to my completion of the Shinkansen in Japan. Why am I so damned sad sometimes? In Yongsan i managed to get on the subway with no problem, and an hour later found myself in Ansan, a satellite city of 600,000k or so, south west of Seoul, where I met up with yet another great CSer, again as the first guest, and from somewhere a bit unusual (Prince Edward Island), Jeff. The man has a great spelling of a great name.

I planned to use Ansan mostly as a base for the city of Suwon, East of Ansan and another satelite city to Seoul, but a tad more important and with a history which began before the inception of concrete tower blocks. 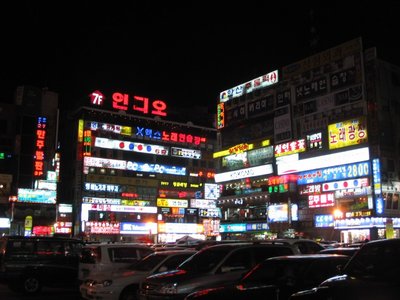 Ansan at night, typical of the almost overbearing neon bombardment in all Korean cities

Suwon is known, allegedly, as the city of pretty toilets. And if that isn't a great reason to visit a city, I don't know what is. Unfortunately I couldn't find the published toilet guide book to religiously visit them all (i'm not sure how the rules would work though. On a pub crawl, it's relatively easy to have a pint at each stop off, but if you are forced to have a cr*p at each toilet on a toilet crawl - and there are 34 of them - you could be going for some time, or else need to have condsumed large quantities of laxatives before you start), but I still randomly came across a good half dozen or so. And whilst a toilet is normally just a toilet (when it's not a hole) the buildings were generally at least vaguely impressive - although I ask myself why they bothered - and toilets extremely well looked after. Expect pics of toilets to follow. 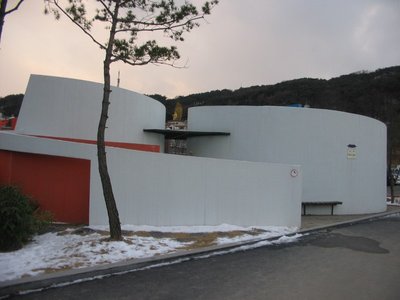 Yup, it's one of the pretty toilets

I probably should be continuing with allsorts of wonderous stories of my latest mishap. But I won't. I've decided to keep that a tightly guarded story, known only to myself, the tree, taxis, hospital staff and 22000 Korean witnesses.

Suwon itself is also home to the Hwasong fortress, an impressive and still relatively intact (well, except the inside of the walls, obviously) 6km long structure built during the Jeongju reign in the late 18th century. The walls are great to walk around, with the possible exception of the Northern side which goes over a whopping great hill which is fine exceept the icy journey down can be a tad quicker that you were expecting... It was also one of the first to be built using western designs and technologies, so includes several innovations. It is also home to a relatively impressive looking - although currently being rebuilt - summer palace, used by the ruling factions as a stop over on there way South or on tours of the region. As with so many mouments, fortresses and temples in Korea, it's history is intrinsinctly linked with the Japanese. Virtually all buildings of note were destroyed (often by fire, sometimes by attack) by the invading Japanese, in at least one of the periods of Korean occupation by the Japanese. And often in several of them. It means that despite the rebuilding there is very little of substance in Korea which is truly original in it's complete form. Odd parts or buildings survived most attacks/fires, but they are essentially tokens rather core, which is somewhat depressing. 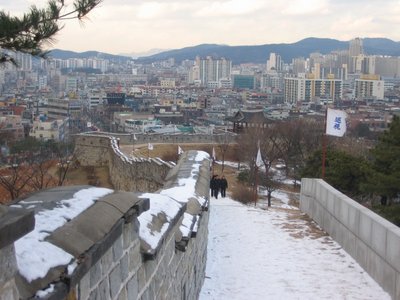 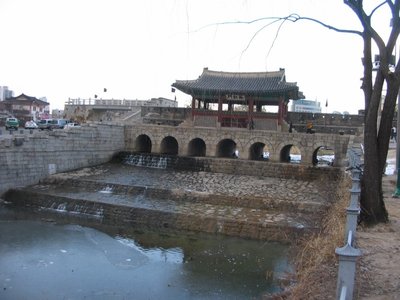 Looking off the highest point of the Suwon fortress, and one fo the smaller gatehouses 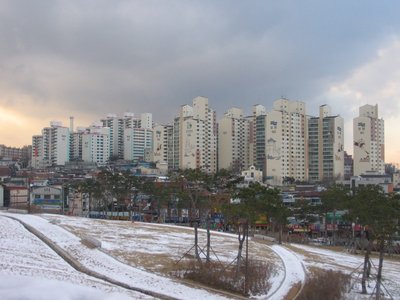 And thus, before I regale you about Seoul (which I can't yet because I haven't actually got there properly), it is with great happiness that i should finish such a pathetic and mind numbing entry by entertaining you with what I hope to be the final installment of the story of my beloved (ahem) Kiki and I. I am sure there will be a twist to come, but at this moment I can't work out what it could be. If i could work Alain Perrin, Veli Zajec, Rupert Lowe and Sir Clive into this palava I would, but i can't. And I won't try. But astonishingly, somebody has done a deed for which I could never repay.

Just last night I discovered that the wonderful girl had got her wish, and it is with huge congratulations and a in no way heavy heart that I must wish Kiki and her new husband, Christian, a wonderful and long lasting marriage. I don't think I know the poor chap, so cannot comiserate him personally, and have no interest in further details (or if the ring did fit his finger), but admit that I am vaguely curious as to the circumstances surrounding their meeting, and the time frame involved until marriage. But not nearly enough to ask. Sincere-ish Best wishes to you both, and Christian, when you realise what has happened, I know some people who for a small fee can arrange you with false papers so you can flee the country and take on a new identity.

I'm now half expecting to be asked to become a godfather in 9 months time.