Of lots of wooden blocks and a recent drugs offence

The road north, and to the sides, from Busan with winter rapidly arriving

And so it was that I was back in Korea. I'd only managed 3 days on my previous pass through, although that was essentially down to the fact that I wasn't supposed to be there and never expected to be in Korea at that time.

But now I was, and it was time to look around.

I spent a good few days wandering around the Busan area, sometimes in the company of my host, Marie (who put me up last time, and astonishingly, was more than happy for me to return - I should point out that it's her fault I got arrested and strip searched, but I won't), and sometimes not. Several bowls of Dong-dong ju were consumed, along with soju and not unextensive amounts of Korean BBQ. God damned it, i love the food here, despite some of it being slightly on the warm side. Got to see human nature at it's finest (a healthy dose of real life is a good slap in the face and leveller every now and again), trekked around Beomosa, a large and wonderfully decorated temple complex in the hills above Busan, and including the inevitable mountain climb. My first Korean temple, and a pleasant surprise and break form the Japanese varieties, simply because they are so colourfully decorated. 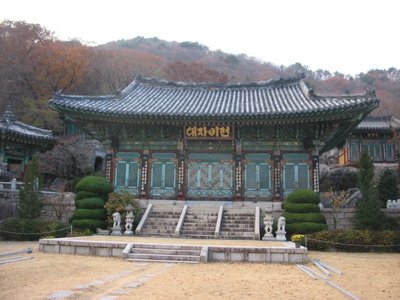 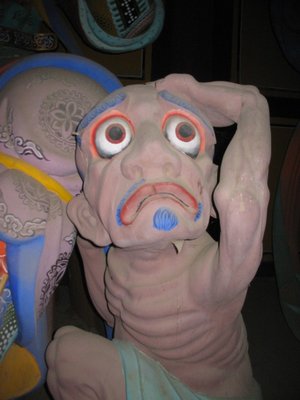 Beomosa Temple, and one of the guardians

Those Koreans didn't mess around. The Geumjongsan fortress above Beomosa is admittedly not fully intact anymore - most of it is completely gone - but it wasn't done as a stop gap measure. Built on top of a mountain, the walls were a stunning 17km long, and with a height of up to 12metres, thats a feck of allot of people needed to carry a feck of allot of stone up dirt tracks to build the fortress. Which is really put into perspective when you realise that the whole thing - complete with all the other buildings within it - took less than 2 years to build. Admittedly there probably wasn't a large union presence, and health and seafty regs were possibly not the strictest, but thats still impressively quick work! Took atrek around Yongsan Park, and was propositioned by two (extremely stunning) Russian prostitutes near a tuperware stall. Why me?

Somehow found our way back to the Dragon bar we'd been at last time, where muggins got the pleasure of leading Marie and her bf, and her cool Korean language exchange friend Yoon to - who all living in the city - despite only having been there once before. Surely it should be the locals and residents who show the guest the way? Oh well. I wandered around Haeundae in the East of the city, notable mainly for it's beach which on sunny summer days gets a staggering 750,000 odd people into a short stretch of barely over a km, and maybe 50m deep. Thats allot of people fighting for not allot of sand. And of course, to the Chinese consulate where I gave them my application and passport and then prayed very hard indeed. 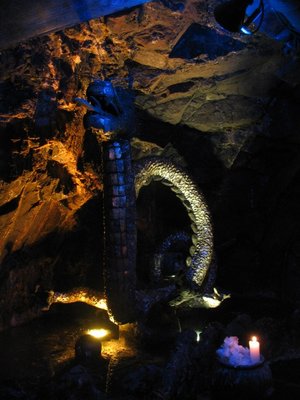 Inside the Dragon bar

With my passport taking 5 days to process, i headed north. First to Daegu, Korea's 3rd largest city and home to the obligatory huge numbers of near identical concrete tower blocks, as is the Korean way. Stayed with a lovely CS American girl (i know, I know. I can't believe that i wrote that either. This is happening way too often. I'm not supposed to like Americans, but some of these people are making it damned hard on me. I probably need a few slaps around the face with a wet cod to help restore me) called Erin http://www.erindoeskorea.blogspot.com, who introduced to me the delights of the weekly foreign bar - I had seen a total of one other foreigner until that moment, and suddenly there was hoardes of them. No idea where the feck they came from. And slightly worryingly the doorway to the bar had singles bar writen in English on it. Although that was upstairs and we went downstairs, i'm sure Kiki would kill me... - one of the best burgers I have ever eaten and some fantastic gimbap (approximately Korean sushi, but without the raw fish) and mandu (dumpling type thingy-majigs) from the old lady across the road.

I spent a day trawling the streets at random and peering into the markets (I love markets like this where you can buy anything at all, and with all the sounds and smells), and also through the numerous oddly specific areas, similar to Istanbul - Motorcycle street, kniting alley, medicene road and Rice Cake Street to name but a few. Took a trip out to Haeinsa, a temple complex West of Daegu, up in the forest covered mountains and wonderfully untouristed (until the bus loads of kids showed up at the end). Yet more lovely decorated temples, hills to climb, and also home to the UNESCO listed Tripitaka Koreana - a set of about 82000 wood blocks, on which have been carved the entire Buddhist scriptures and teachings, and essentially constitute the worlds first book. 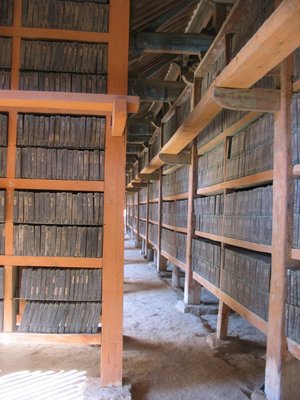 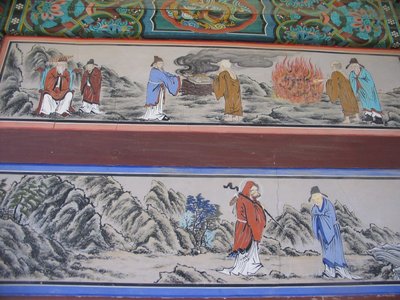 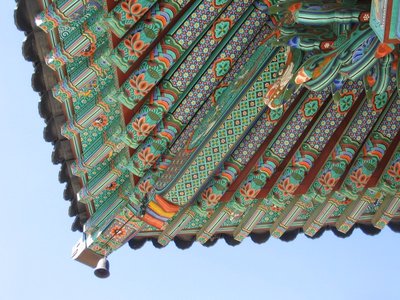 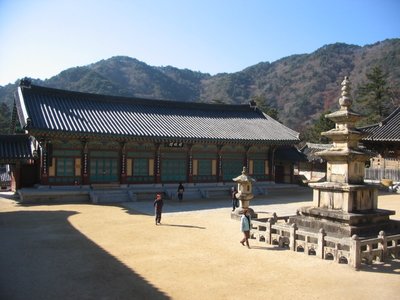 The Tripitaka Koreana and shots of the Haeinsa temple complex

Kevin didn't put the tent up, and had actually left it in Busan, and hence it didn't rain.

And I was also taken to do something so unusual and unlike me that it has to be noted. I was taken to the cinema. So, accompanied by Erin and another CSer/Engrish teacher, Ryan, we went to see Harry Potter and the Goblet of Fire. I am aware that may not sound like a major event, but I belive that the last thing I saw at the cinema was probably Titanic, in my first year at Uni, and before that quite possibly Who Framed Roger Rabbit for Andrew Gordon's 9th (maybe?) birthday waaaaaaay back when. I'm not a cinema goer. But it was actually damned good. I've not read the books, and only seen 1 and a bit of the previous films, but as a stand alone bit of entertainment, it was a great film. Admittedly the one that Ryan and I would really like to see would be Harry Poter and the Jehovah's Witness, but that might be a stretch too far. I really must get around to reading the books.

Cunningly leaving Erin to be horribly sick for the weekend (and inadvertantly stealing her LP guide), I spent a couple of days in Gyeongju, the former capital and a major Korean drawcard about an hour to the West. Wandered around the wonderful Bulguska temple complex, home to the finest Silla dynasty temple in existence, and climbed the mountain up to the Seoguram Buddha (of Sakyamini) grotto, yet another place where Korean workers must have had a distinct lack of fun in transporting such a huge lump of rock up a tiny track to the top of a mountain. No, I have no idea what the difference between Silla and non Silla temples is, as they all look the same to me. The only difference I can come up with being the inclusion of the word "Silla". 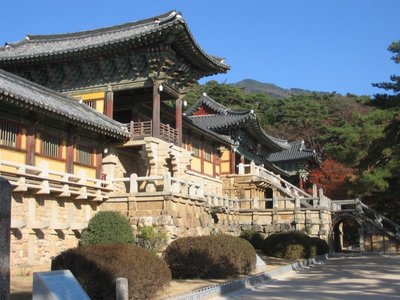 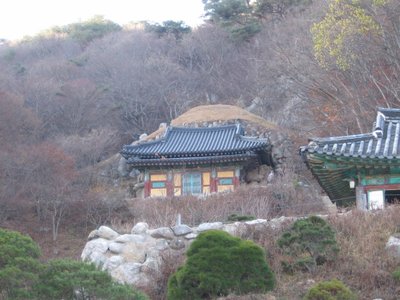 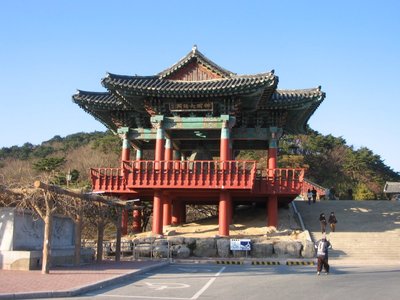 Seoguram Buddha building from the outside, and the temple at the base of the climb

Woke up to a covering of snow and ice which proved to me that winter is really here. I suppose that it is december, so thats no big surprise, but I now have to figure out how to survive the cold when i'm not really kitted out for it, and without spending lots of money. Gyeongju city is kind of odd because it contains a large number of Tumuli, large grass burial mounds of Silla kings and nobles, doted randomly around the place, which helps give the city an unusual feel to it. To the south, the area is litered with so many burial mounds, temples, stone Buddhas and Pagodas that they are still being found on a regular basis by people just wandering around and going even just a few metres off the path, which makes an interesting wander south past Wolseong Park which led to my imagination predictably going into overdrive about what else could possibly be waiting to be uncovered there. I won't bore you with the results, but I did pay a trip to a bookies after one idea hit me... 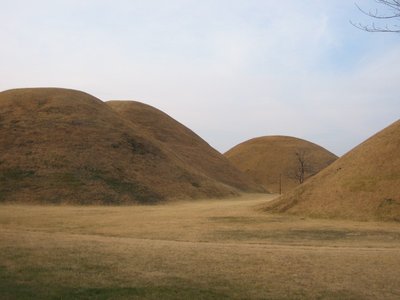 With trepidation, I returned to Busan, where for the sheer heck of it I stayed at Emily's instead of Maries, took in a night of trivia (or a quiz for those who don't speak North American, which was the first one I had done since leaving the UK, and gave me any number of strange flashbacks and memories from my Oxford days. Who else remembers little Dave??) and then headed to the Chinese embassy to collect my visa. So convinced was I that i would have my application rejected due to a "recent drugs offence", and so prepared was I to argue my case, that I was completely at a loss when I left the consulate all of 90seconds after entering, complete with the requested double entry visa. I'm now convinced that i'm being set up for when I actually enter, and they are just toying with me.

And thus, bemused but with passport in hand, I headed from Busan for probably the final time this trip, dropping into Daegu to return one stolen LP and gain a lovely cough from Erin, and via the high speed KTX to Daejon. Which i really should write about now, but really can not be arsed doing, so It will have to wait.

And if Riz Ree happens to be reading this, I hope Simon has you back on his leash.

Your getting married to an American???

Ponders which of the many possible ways he will use to kill Cupcake, settles on a bizare ritual involving copius amounts of liquourice...

Liquourice is fine, but I would prefer to die by chocolate.