This isn't even a real entry as it involves no traveling

It is with great joy that it appears that so many of you seem to actually be reading this damned thing. It actually even makes it feel vaguelly worthwhile, despite the fact that I was only ever really doing it for myself. But still.

Such has been the overwhelming response to a couple of recent issues, that i figured I should be lazy and answer a couple of recurring questions here instead of individually by email.

1. For those interested in the current status of Kiki, the Japanese girl who tried to marry me, here goes. Although I don't remember it, it appears that I thought something was up from the first time I met her, as I seem to have given her an email address that i only use for random signups, and as such don't check with any frequency. And so it was that 3 weeks or so after the episode in Sapporo, I checked the account, to discover that I had been receiving an average of about 8 mails a day from her, mostly consisting of variants of "I really miss you", "Where are you" and "when are you coming back. I need to reschedule the wedding" as well as a more or less constant updates about what has been going on in her life. It peaked at 31 emails about 3 days after I ran, and even now i'm still getting 5 or 6, despite reporting her email address as spam...

As far as I know, she doesn't have any of my normal email addresses, or this blog address so hasn't yet traced me any other way, especially now that my Japanese phone number is dead (whoever ends up with THAT number, could be in for a fun time...). I will warn you all now that in such an instance and she finds me here, I will instantly leave all trace of my Gelli being and disappear. I might return under a new guise, possibly called Beverley from Australia or some such, but I probably won't actually tell you all in case one of you is an informer.

On a side issue, if anybody (male) - who i know or otherwise, but the later would be preferable - happens to have an urgent desire to get married, and would consider a not unattractive and actually quite intelligent 28yr old Japanese girl, with a strangely psycotic and unhinged streak, please let me know and i will arrange an inroduction.

2. I know that you all think that you are the only one to come up with it, but whilst the first quip about Sherbert Dip was mildly amusing, the following 70 odd requests (plus a few from people wanting other sweets, but not having the foresight to ask for Sherbert dip) got a bit boring. Lack of useful variety to make it interesting, I must admit.

But for the record, No, I will not be bringing anybody tubes of sherbet, as strangely enough, the idea of carrying around tubes of white powder isn't overly attractive or clever to somebody with my record for getting stopped at customs/immigration etc. And yes, that does also rule out bags of sugar, salt and flour amongst many others. Any other requests from people missing stuff, and in places that I might be going, i will quite happily entertain, but only if substance is deemed inoffensive enough by me.

3. For the rest of you who emailed to ask what the feck liquorice actually is, it's a kind of sweet eaten in the UK and North America (and others), and in the form I had it in which caused a problem - the 2 bags of bassets allsorts were ok - was pick and mix black sweets. I'm trying to get hold of a pic of the offending stuff to post here, but until then, this might (unlikely) be of some use http://en.wikipedia.org/wiki/Liquorice 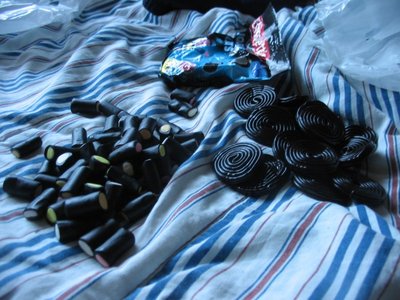 Some of the offending candy...

And that's about it.

It includes nothing of interest, and no word of my travels and further exploits. Tough.

I will regale you all with tales from the start of my second Korean odyssey very soon, but until then, i'll leave you with the word that I am happily in Daegu at the moment, enjoying the wonders of South Korea and awaiting the pleasure of the Chinese consulate in Busan almost certainly currently declining my visa application due to a previous recent narcotic offence...

Hope all good, and Happy Thansksgiving/Advent/Lucia/End of term/finish of the RouteMasters or whatever else anybody is currently using as an excuse to celebrate with large quantities of alcoholic beverages.

Glad to hear you're still having a good time. I wonder how many more stalkers you're going to meet on the way. Can i start the betting at 10 more.....

So... can you bring me some Sherbert Dip?