Yellow Paint and Jabba the Hutt

This is a random entry for no apparent reason, as i`m not saying anything of interest to anybody, myself included. You may as well just skip this one, as it`s just going to be a big dissapointment if your expecting something even vaguely readible in which to read whilst avoiding work.

After almost a week in Tokyo, it was time to move on. That I will
return, is a cert, and I will on this trip as well as hopefully in the future. With luck, even get the opportunity to live here for a few months or so at some point. But for the moment, it was time to leave, to rest my brain and try and take in the enormity and sheer overload of images I had accumulated in my time there. 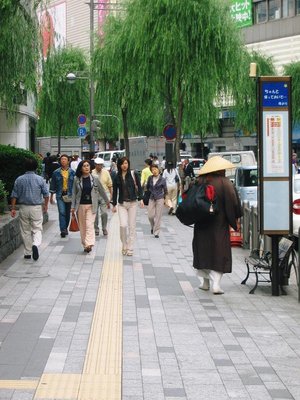 I had booked a ferry from Oarai (about 2 hours North East of Tokyo) to Tomakomai on Hokkaido, for the oddly bargain price of only \4300 for an 18 hour trek, for the following week, which gave me 5 nights to play with first. My idea was to head back to Chigasaki for a night and drop my (old) bag off with Soness, before probably heading to Hakone for 2 or 3 days for some trekking, country sight seeing, and hopefully to finally get a glimpse of the elusive Fuji-san from one of its main vantage points. But of course, it didn`t work that way. 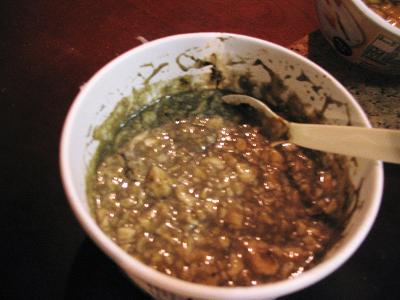 It was really strange, but being back in Chigasaki at Soness and
Nibbles` place felt like being home again. Doubly odd for me, in that I don`t really even HAVE a home at all, and have never really felt like I have that one place that is "home". Yet somewhere I hadn`t even been for a week felt like I had returned home. Human beings, feelings and reactions are strange indeed. 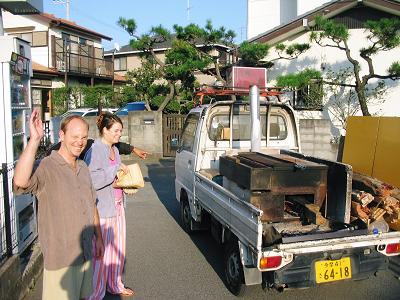 Most countries have Ice-cream vans. Japan has the sweet potato man and his truck

For reasons that now elude me, after playing the role of collection person at the station for a new arrival (Garrett, a cool Colorado guy in Japan for a week as part of a 12week RTW trip, for free), and then as a guest in a game of guess the gaijin`s profession for an English class (the number of 5 year olds who would guess at cartographer must be relatively small), i seem to have ended up becoming a decorator.

It was almost an unmitigated distaster, although not quite. I tried damned hard to make it one, but never really could achieve the effect i had hoped for. And amazingly, somewhere near the end, it almost came together and a wonderful sand covered gloomy brown hallway became an acid overdosed, dear god don`t look if your hungover bright yellow hallway. And remarkably, the windows and floor didn`t even get re-coloured either (i should probably have unhung the fleece from the wll first, as it doesn`t look so good with a bright yellow back), although i think that a month later i will still have some interesting lumps of yellow skin.

Very strangely, i actually enjoyed doing something that could be construed as being normal. It`s strange, but being constantly on the move - as i have been for years - means that i find strange enjoyment in the novelty factor of doing utterly stupid and mundane things. Washing up is no big chore to me, because i rarely have to do it. And something like decorating is just a whole new wow factor. Plus the fact that if i really f*ck it up, i can easily just run away very quickly to another foreign country and never return to Japan.

I also finally, and more or less incontrovertably proved that i am allergic to cats (thanks Nibbles). I have thought it possible for a couple of years, but only now really proved it. Moving around so often and quickly means that there are always lots of potential other factors that could be playing into it. But i`m now certain that I am, although it seems a bit daft to me that i`ve got to 26years old before i actually realised it. Such is life.

This really is a dull entry, isn`t it.

It was also at around this time that for some strange reason i seem to have been talked into making a life sized Jabba the Hutt outfit to wear for Halloween. How THAT one came about i`m not entirely sure, and how the heck i can produce such a thing on the move, i`m not sure, but it sounded like a challenge. And the idea of wearing the costume for a 75min commute on the train/metro through Tokyo rush hour traffic just did it for me. That is one stupid thing that i really just want to do. With luck, more on that concept later.

If successful, maybe i can even go and join the superhero guy in Harajuku one sunday.

Did take a typically well planned day out to Hakone with Garrett, leaving at such a time that the full circuit wasn`t really practical, whilst also picking a mostly overcast - turning a bit grim day so there was no chance of a view of Fuji, despite it (allegedly) being Right there. Poo. Spent a few hours wandering around the open air modern art museum, which was not uninteresting, and included a decent sized Picasso section, but compared to the expected chance to see Fuji, it didn`t live high for me. 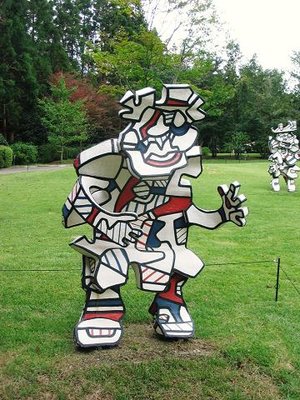 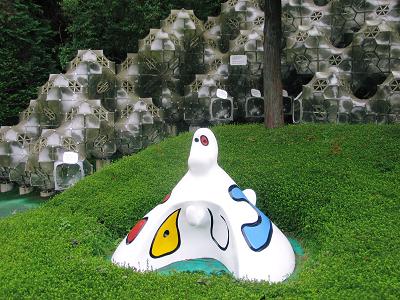 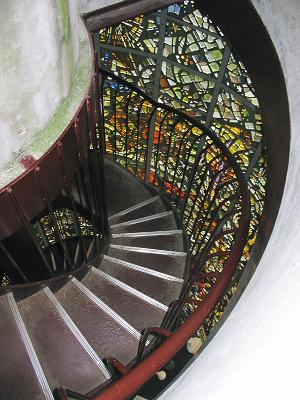 Spent another couple of days wandering around Tokyo at random, including cunningly managing to crash yet another birthday of a random stranger (I`m getting damned good at this. My timing is so often atrocious, that its good to finally find something i seem to be able to time to perfection), by turning up at one of Soness` friends, Charles, birthday do, at a wonderful Brazilian BBQ restaurant. I`d never been to a Brazilian place before, but remember Miha and Katja near the start of my trip talking about their recent trip to Brazil, and how they had more or less just ate meat the whole time as was so damned good. If the stuff actually in Brazilian is anywhere near as good as it was there - and i would expect it to be much better - i`m sorely tempted to just give up my trip now, s*d the no flying thing and jump straight on a plane to Rio. And the fact that it was all you can eat and drink as well didn`t really harm matters... 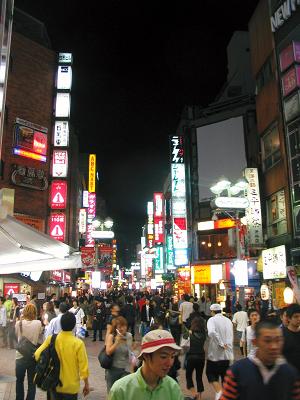 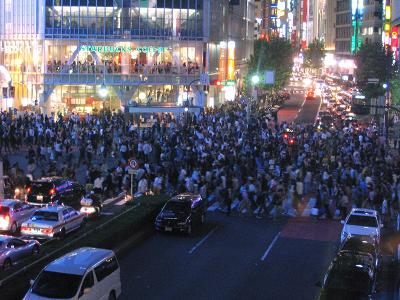 Shibuya at night, and the worlds busiest pedestrian crossing. Feck me, there`s allot of folks cross at Shibuya!

Spent the night out in Roppongi, on an all nighter at a club as per everybody else, partly due to the fact that there is no way home, so all clubs are timed to close at either last train or first train, more or less. I cunningly paid for 2 drinks, only realising after we had left the club that i had been given a receipt thingy on entering the club which i had pocketed with my change, which on inspection turned out to be 2 drinks tickets. Such is life. The club was a kind of depressing meat market, being well over 3/4 white folks, with the rest made up of Japanese girls seemingly on the hunt for a white boyfriend. And it was to one of these (although i didn`t think she was so much out for a white boyfriend as much as someone to talk English with), Kiki, that i ended up talking to for a while. Turns out that she was from Sapporo and shortly heading back there, and on hearing of my imminent trip up to Hokkaido, told me to give her a call when i got there and i could crash at hers and she`s show me around. And people told me that Japanese are notoriously reluctant to invite people into their houses. Admittedly, as i would later discover, there was a slight catch involved, but that`s part of the following tale.

And with a ferry to catch, yet again i finally got around to moving my arse, and so trekked right across Tokyo to Oarai on the NE coast, and onto a - remarkably cheap by Japanese standards. Transport is hugely expensive, except, it seems, ferries. I paid 4000yen for the 18hour trek, which is less than the cost of a couple of hours by train, and 28000 it would cost by train from Tokyo.

And thus, i headed to Hokkaido.

Posted by Gelli 22:01 Archived in Japan