After finally moving my arse - admittedly only all of 20km - i spent 4 nights a bit further round the coast in a place called Zushi, as guests of two more great American hosts, Casey and Dave. 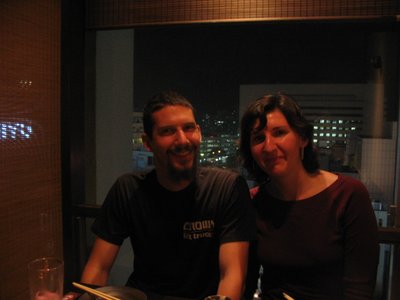 For some unknown reason, Yokohama has always had a kind of mystical and exotic appeal and lure to me. Behind Vladivostok (check) and Timboktu (give me time), sure, but then very high on my list of random places i have always wanted to visit for no apparent reason. I think some of it is historical, given its role as the main port for cross-Pacific liners heading off, and my long term idea of going RTW. Which as it obviously precludes any form of flying, would probably entail Yokohama, despite the extinction of Cross Pacific passenger ships that i would ideally use.

So it was with great anticipation that Dave and I took the short journey up to Yokohama. Japan`s second (or third depending upon your point of view) largest city, isn`t hugely well known as it has essentially merged into Kawasaki and Tokyo to ctreate one giant urban mass, generally just known as Tokyo. And whilst not the worlds most stunning place by any means, it certainly didn`t dissapoint my romantic notions as i was half expecting. The city has reinvented itself with alot of new developments since its passing from a major passenger transit point, although it remains one of the worlds largest ports. 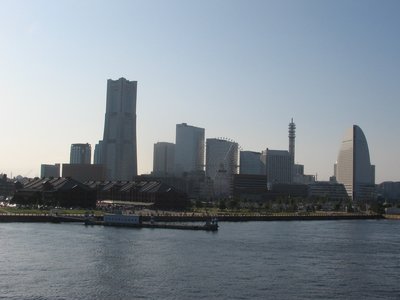 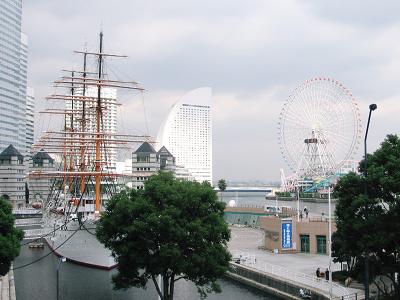 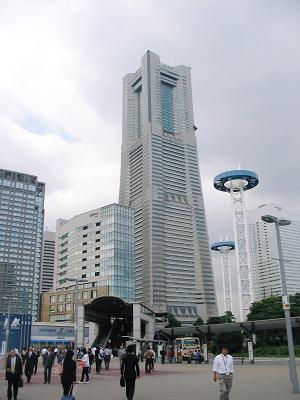 ... includes not only Japan`s tallest building, but includes the worlds fastest lift (elevator), a great old dockyard area, what is billed as the worlds tallest ferris wheel (although others also claim this and i can`t be bothered to research if it`s true or not) and an office rip off of Brunei`s famous sail hotel, although in fairness, i haven`t checked which came first.

The dock area is decent to walk around, whilst the cruise ship terminal has the interesting extra of being able to walk all over the grass covered roof for a great view around the harbour. There`s also a fairly large - and on the day we were there, hugely busy, Chinese quarter. 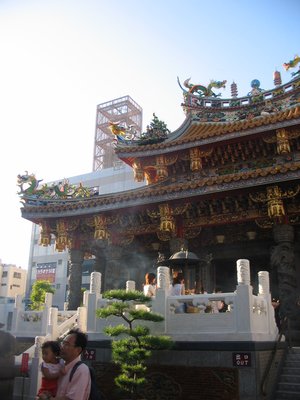 The MM21 tower itself also has what for me was an amazingly simple technical marvel of the "i can`t belive i`ve never seen that before" kind. I have no idea why it made such an impression on me, but even the simple concept was one i had never considered before. And it is is little things like that which i love Japan for. Don`t laugh. But it was a circular escalator: 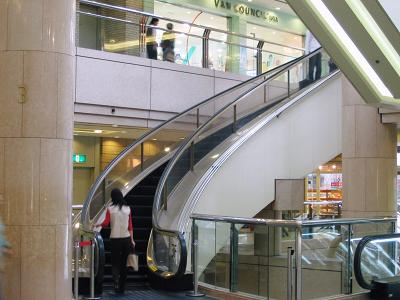 So simple, yet such a new idea to me. It`s great being pleased by such simple and stupid things as it means you never have to set your sights high or get dissapointed!

We also got to witness the ceremony for which i can`t remember the name, but involves shrine touring. Essentially, most neighbourhood`s in Japan have a portable shrine, and once or twice a year, to vast ceremony, all of the men dress up in traditional robes and headbands, get roaring drunk, and then take the shrine on tour. 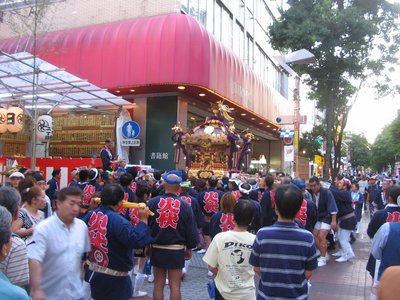 The idea being something along the lines of touring the entire neighbourhood to bring good luck, but more an excuse to get drunk, and carry something heavy around in circles whilst chanting uninteligible chants and followed by the old/young and women of the same neighbourhood. Great to watch, although some of the precessions were a tad too unsteady on their feet to ideally be entrusted with carrying a heavy and priceless neighbourhood artefact.

One oddball reason i like this country is this guy: 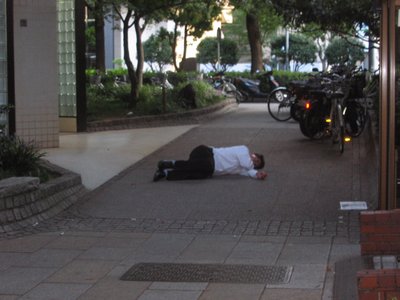 The middle of the afternoon, in the crowded centre of a city of 4 million people, and this salaryman has passed out drunk on the pavement with nobody giving him a second look, or attempting to steal his stuff. If you did that in London, for example, you would either be arrested, have crowds of people around you &/or ambulances called, and almost certainly you would wake up without your wallet, phone, bag, and quite possibly, clothes as well.

The following day, we headed back to Yokohama. I am a sports nut, and will watch anything live, and the previous day we had passed the stadium and noticed that it was the middle of a baseball series. And there was no way i could turn down the chance to watch profesional rounders... 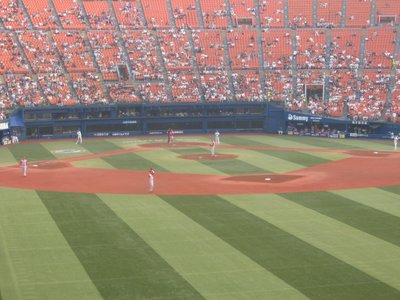 It`s a sport i know little about, except that in the US, some of the players earn seriously excessive amounts of money, and they have a world series* played by entirely US based sides, despite the fact that a large chunk of the worlds best players are Latin Americans, and many of whose sides could probably more than hold their own against the Americans if finances weren`t an issue. An in Japan, excepting maybe Sumo, it`s the biggest sport going, so i wanted to watch a game or two.

The local Baystars against the Hiroshinma Carp was a relatively meaningless game, with both out of running for overall honours towards the end of the season, but interesting for me all the same. One of the most interesting things for me was teh crowd, and i have no idea if that was a standard Japanes thing, or baseball thing, or both. There was no independence at all, with everything being perfectly choreographed to almost be depressing. During the opposition innings, the other set of fans was deadly silent, whilst during their own innings, the crowd followed precisiely the chants and cheers arranged by the "cheer leaders" - a group of late teen guys, who stood aroud the perimiter holding up which signs for which chants should be sung and when.

There was no variety of chants between innings and really, even between the two teams, and no ad-libbing or the like as you would get in the UK or most of Europe. But the most bizare thing to me was that people were paying so much attention to the chanting and singing, that they didn`t actually really watch the game. There was a huge delayed reaction to anything good by tehhome team, and a reaction which only kicked in after a chant had ended, and i found that really odd. I mean,can you imagine fooball fans not cheering a goal under 10 seconds after it had happened, because they hadn`t realised, due to singing `the referee`s a winker (missprint)` or some such? 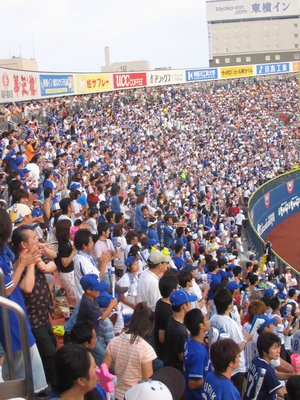 Apparently it wasn`t a typical game, with the Baystars 10-1 up after just 2 of 9 innings (somebody got 4 points for hit due to 3 runners, a steeplechaser, the bases loaded and the giraffe hiding in the bushes or something like that). The Carp subbed the sub of the subs - sub pitcher (Cheats - Whats wrong with limited substitutions, or stick with who`s playing and suffer the consequences, a la cricket) and it finished 15-9 - similar to an Aussie batting card during the Ashes, i suppose - and nobody really seemed to care providing that they could cheer and do the duck dance whenever a specific batsman came out. But it was all good natured fun, and i`m glad i made the effort.

I also used Dave and Casey`s proximity to visit Kamakura, another former Japanese capital and one of the alleged `must see`s` around Tokyo. 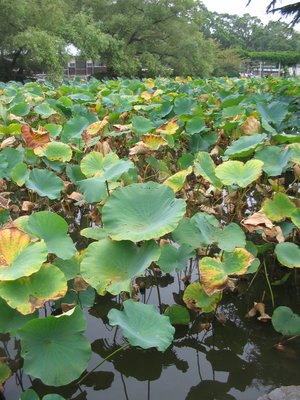 It`s a fairly spread out town, containing any number of Shrines and temples (all similar looking to every other shrine and temple in Japan) and gardens, interspersed with assorted other tourist sights and places to try and relieve you of your cash - a Japanese speciality. 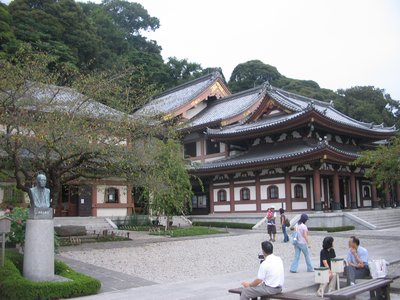 We wandered around a couple of the major temples, and trawlled down the main pedestrian street, with any number of hitherunto unknown and unimagined things for sale and to tempt tourists. Visted a more hidden shrine in the hills, where, legend has it, pilgrims were told to go there and wash their grain before planting it in a Holy spring to ensure a good and bountiful harvest, which would be double the harvest of unwashed grain.

Not ones to miss a trick, the Japanese, at some point some bright spark had pondered whether the multiplication would also worked with other items than grain, and tried washing money. And thus, it became one of Japans leading money washing sites (although different to money laundering, for which you generally need to talk to a Yakuza member or bent lawyer/MP).

Of course i had to partake (why not, i figured?) as one can never have too much cash, especially when travelling, and in an expensive country like Japan, and so i washed some notes. Admittedly i may have tried to push my luck just a little too far by also washing a credit card, but what did i have to loose...

After money washing, we took in Kamakura`s major attraction, the Giant Buddha. Teh second largest Buddha in the world (after the Nara
one i had previously visited), and largest outdoors Buddha. It even had the bonus of being able to climb inside, although in fairness, as you would expect, there isn`t actually a great deal to see or do inside a giant iron skull. Yes, it`s a great head, but to me there`s no comparison to Papa Lenin in Ulan-Ude. Now THAT really is a great head.

Scarily, the huge and heavy Buddha had been moved backwards and off its pedestal by a tsunami a couple of hundred years ago which had demolished the surrounding temple complex. But the fact it is over a kilometre from the coast, and a hge iron structure, and was still moved backwards by the wave shows again the awesome power of a tsunami. 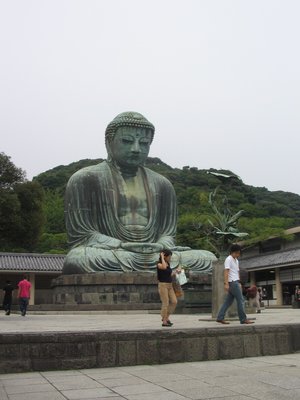 We finished up with a visit to one of the most picturesque of the temple areas, which includes a shrine for the god of travellers (of which of course, it more or less makes sense for me to pay attention to), pregnant women and dead children. Part of the complex is lined with thousands of small statues and flowers, where grieving parents return time after time to pray for a good afterlife to their sadly departed kids. Whether they have to pay the entrance fee every time, I don`t know, but it really would not surprise me in the slightest. 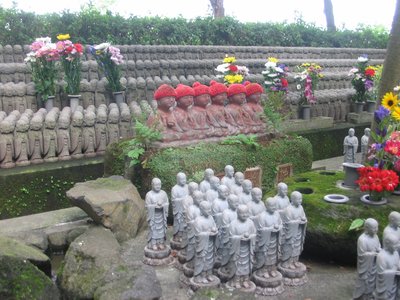 The complex also includes some caves, some lovely ponds and garden areas, and a view over the town and out onto the bay. There is also a revolving library, which, legend has it, if you push it round, you will be infused by the wisdom stored within. Of course, i also had to have a push, as i have heard that you can never have too much wisdom, and as i don`t really have any - except of the teeth variety - it seemed a good idea. Again, what did i have to loose?

And after a days temple visiting, and both doubling my cash and credit card bill - in retrospect, that one could backfire on me - and then infusing some much needed (apparently) wisdom and knowledge into my empty cranial cavity, there was only one course of action. A Tofu restaurant. Obviously. And i can confirm that freshly cooked cooked tofu, whilst admittedly warm and fresh, still tastes like, well, nothing really, just as normal tofu does.

And as your all gaining some much needed shut eye (admit it, there`s only one reason anybody would even attempt to read this drivel), i`ll quit now.

I can confirm that I did finally move on, to Nikko and then Central Tokyo, but more on that, including tales of mad yet entrepreneurial homeless people plus choosing to sleep in a coffin, next time.

Posted by Gelli 21:53 Archived in Japan