Movement at a kings ransom in Southern Japan, and more water

I got the night boat to Hakata (Fukuoka, on Kyushu). I could have got the beetle hydrofoil in 3 hours, but I figured why not take a night boat for 13hours. Actually, it wasn’t 13, as they oddly boarded us at 7pm, but we didn’t leave until 12, and then arrived at 6 but we couldn’t disembark until 8. All I can guess is that immigration at both ends didn’t want to be up late/early. I had made it to Japan.

Depressingly, Alphaville, the Vapours and Aneka all went through my head, along with a chunk of the Japan back catalogue. Why me?! I headed straight down to Nagasaki (and by half way there had the Malcom McLaren song going round in my head, hence the title) where my Canadian friend lives. Some of you know her, and some know of her, but she has asked to remain strictly anonymous. So I will use an alias for her. I considered Tetsuji, but decided upon Derek. I haven’t seen Derek for a couple of years and it was great to catch up again after all this time.

My first impressions of Japan were odd. Most places I get a good gut feel for quite quickly and it rarely turns out to be wrong, but Japan I got nothing. Intriguing, yes, and I’m looking forward to seeing allot more of it, but no real first impression. The only things I noticed quickly, were contrasts to Korea. Whilst not huge numbers, I saw a few foreigners in Nagasaki, but they didn’t acknowledge each other in public, and I have yet to have a Japanese person come up to me in street and start talking, which happened to us a good few times in Busan. And the general standard of English was extremely poor. For a country which has been teaching everybody English at school for many years, I was amazed at just how few people spoke any English at all, let alone more than a few basic words.

I spent a week or so in Nagasaki, just relaxing, catching up on things, doing not allot and wandering around. It was somewhat hot (mid 30’s average), and didn’t really cool down at night either. Nagasaki is an interesting and pleasant place. Big enough to have everything you need, but small enough not to overwhelm, and a mix of cultures and histories. As well as the obvious fact it was the (unintended − that ‘honour’ was supposed to go to Kokura, now part of Kitakyushu a couple of hours North) site of the second atomic bomb, for over 200 years under the Japanese isolation period, small international settlements of Dutch and Portuguese in Nagasaki were the countries only contact with the rest world, and it was one of the first places to be opened up properly. 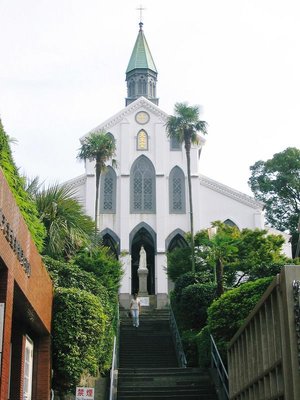 I indulged in my crazy mountain climbing fetish, by going up a couple of the hills around the city in 100% humidity and 38degree heat as has become a norm. I really shouldnt be as stupid as i am regarding climbing things in the peak heat parts of the day, but i never claimed to be intelligent, and have a stubborn streak which i seem to play to. We spent a morning wandering around the A bomb centre and Peace Park, which is depressing but required. The scariest thing for me was the counters for all of the Nuclear tests and explosions that have occured - the 2 Japanese being the only ones to have been used in anger, but over 1000 tests. And the fact that any number of nukes have been lost accidentally and remain unaccounted for. 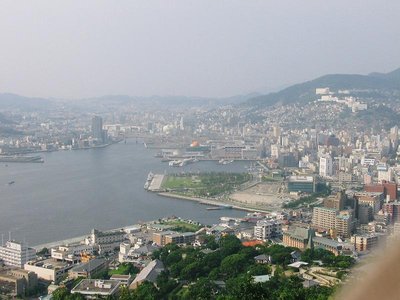 I finally decided to get off my arse and head north.

Whilst i have a rail pass i can use, it was still early september and Seishun Kippu time. Every holiday, there is a special ticket in Japan, where you by 5 days travel for 11000 yen (about gbp 55gbp). Or a tenner a day to travel anywhere in Japan. Its a huge discount and makes a big saving, although the twist is that you can only use local trains. Meaning things take time. I planned to use my 5 days up in getting to Tokyo over a week (saving me about 30000 yen in travel) and seeing some bits along the way.

I first headed to Hagi, on the NW coast of Honshu, the main Island. It was a place i pced more or less at radom, and because i couldn't really turn down the opportunity to visit a Romanian legend. Oddly, my random choice turned out well. Hagi is a cool little historical city, which used to once be the japanese capital, and is surrounded on 3 sides by mountains, and the 4th by the Sea of Japan, and has several local volcanoes. It was mostly raining, but sht happens. 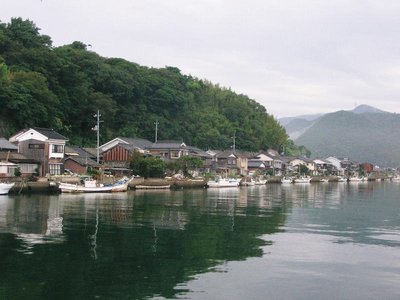 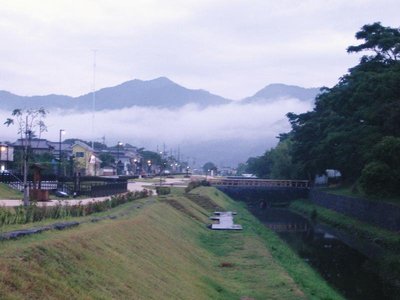 The following day i headed back to the south coast to Hiroshima and spent a couple of days there. Hiroshima is quite a pleasant place, and felt completely different to Nagasaki. One of the main things that i wanted to see nearby, Miyajima, (a floating shrine and island) had to be dropped due to the weather which added a slight twist to my day. Again i trawled around the Peace Park and museum, and looked at the slightly different take on the tragic events to Nagasaki. I was interested to see that successive mayors of the city have written to the relevant world leader expressing their "dissapointment" at every nuclear test since, and copies of the letters were attached to a wall for reading. 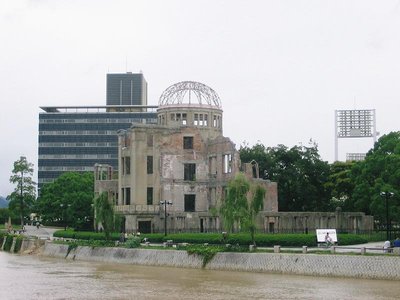 When i came out from the musuem, with no let up in rain, i started to feel that something wasn"t quite right. For a weekday afternoon, there was a distinct lack of people wandering around, and by the time i reached the main shopping area, i knew something was up. A large majority of the shops were shuttered over, and those that weren't seemed in the process of shutting up. And all had nice Japanese printed ntices stuck to them which i couldn't read. Except for something about the date and 16:00. It was about 16:30 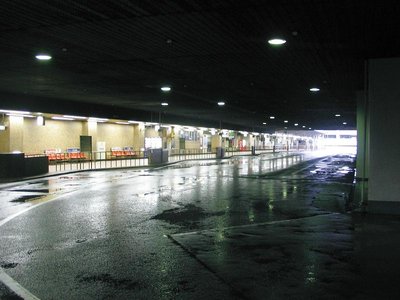 It`s not always quite this empty...

After pondering this a while, i started to realise that i could be in trouble. There was not a single tram in sight, and at the bus station i discovered that the previously bustling centre was utterly deserted, with not even empty buses in sight. As i came out, and stood in the p1ssing rain pondering my next move, i got picked up by a TV cameraman, who decided to shoot pictres of me standing there getting pissed on which continued my odd trend of appearing on live media on this trip. I discovered that they had shut down the city due to a typhoon, which although not due to go directly overhead (Kyushu got mashed, as did the Western edge of Honshu including Hagi) was close enough for the govt to close up out of basic cautiousness - no idea if thats a really a word, but i like it, so there. And in fairness, in the aftermath of Katrina and the US, a bit of caution and pre evacuation is no bad thing. Except that i was in the centre of Hiroshima, and my accoodation wasn't.

There was only one option, and off i walked. Or rather, waded. A nice 6km splash took me home, and after being utterly drenched after the first 4seconds, the rain was of no great consequence. It wasn't particularly windy and the rain was warm, and as i do actually like rain, i didn't mind too much. Until i started walking uphill through torents of decending water. The hostel staff laughed when i trudged inlike a drowned rat, the only person in Japan who doesnt use an umbrella, and proceeded to wring several litres of water out of my socks.

My shoes were still trying to dry off 10 days later.

I continued my trek up towards Tokyo stopping off in Kurashiki (which has a wonderful little canal district which is rightly raved about, but takes barely 10mins to walk through and then leaves you wondering what to do next), where i combined my accom search with my hill fetish and stayed in a hostel on top of a large hill which you walk through a large cemetery to get to. Kurashiki is also notable for it's Danish theme park, a combination of a Tivoli recreation and chunks of Kobenhavn. It promised an authentic Danish experience, but as it was all shut, I can only assume that it was designed as an authentic Sunday... 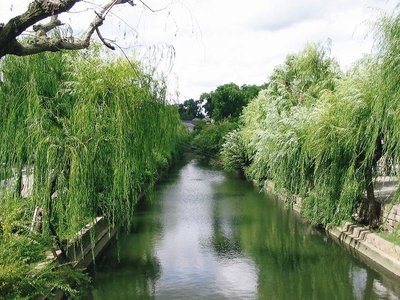 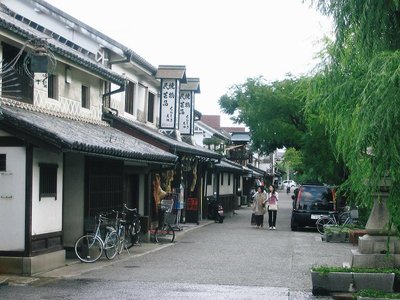 I spent a bit of time wandering around neighbouring Okayama, home of one of Japan's "big 3 gardens" (everything in Japan is rated) which turned out to be mainly a large grass lawn, which whilst a novelty in Japan wasn't hugely excting to me, and then on to Himeji, home to one of the few authentic castles (i.e. not rebuilt with concrete) left in Japan, and then to Osaka, where i was hosted by a great Kiwi couple, Kent and Amanda, yet more amazing CSers. 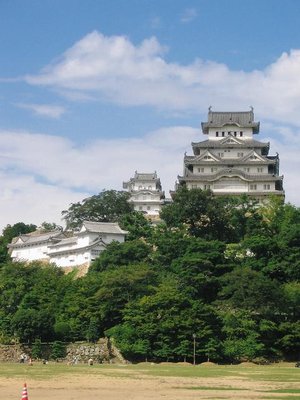 I didn't actually see much of Osaka, as i only had a couple of days left to get up to Tokyo on the cheap, but went out instead to Nara, another old capital nearby. I loved Nara. 2000 odd deer wandering without fear around a huge park area which is stuffed with assorted temples and shrines including 8 World Heritage sites and the worlds largest wooden building, which also contains the worlds largest stone Buddha statue. It is an amazing area to just wander around for a day or so, and thats more or less just what i did! Pictures probably work better than words, but i finally felt as though i was getting a bit of an idea about Japan. If anybody happens to be in Japan, go to Nara, thats all i can say. 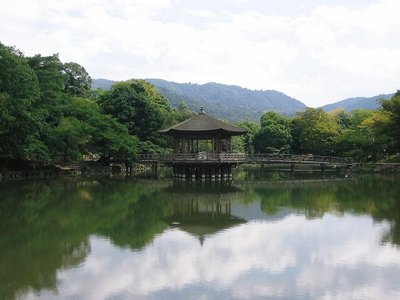 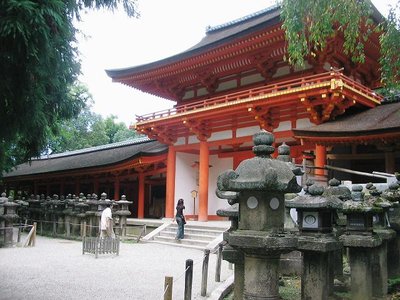 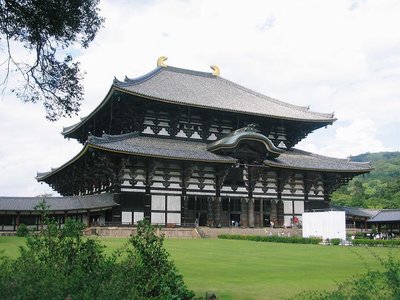 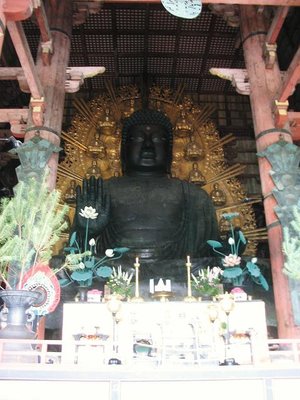 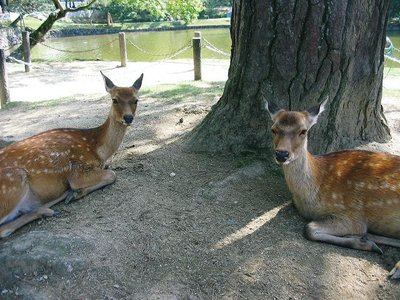 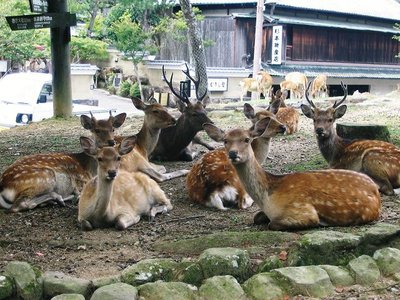 With the exception if a great Korean dinner and the bonus of it being 180yen beer night (every 9th of the month, randomly, and a twwo thirds price saving), i did nothing else in Osaka as i had to hurry onwards on the last day of my cheapy ticket. And thus, i tried to go onto Tokyo. But that can come later. And will.

I hate my head sometimes!

Posted by Gelli 21:56 Archived in Japan