Despite the fact that my plans and ideas had fallen flat on themselves and i was going to miss the bits of Russia i had been most looking forward to, it wasn't all that bad. I now had a definite reason to come back except in transit, and a vague idea of a plan for next summer already. Or maybe the one after, as it is after all Germany 06 next summer. I REALLY want to see Sakhalin, and the BAM area, and i should be able to spend much more time there then. In addition, i'll be able to spend a chunk more time doing the bits around Baikal i wanted to, and also filling in the Krasnoyarsk gaps. Any takers?!

But as i had to scrap that, i had to go East by land and as such, had the opportunity to get to Ulan Ude, capital of the Buryat Republic, and somewhere i had been dissapointed that i would have to miss on this trip. Ulan Ude is the centre of Buddhism in Russia, and a large chunk of the people are of Mongol (well, Buryat) extract, giving the place a very different feel.

My plan of a day train from Irkutsk had worked reasonably well - the weather (annoyingly after the previous few days) was excellent, and for 6 or so of the 8 hour trip, the views of the Lake and scenery were definitely worth loosing a day over. Unfortuantely i happened to be in a train with no openable windows, and teh outsides were filthy, meaning that photos weren't a major option, but it was worth it all the same.

I liked Ulan-Ude immediately. I arrived in the late afternoon sun, and after a short walk to the centre, things took a turn for the better. I had stumbled into a large free concert in the main square, and i am a sucker for any kind of live music. And then i saw the head. 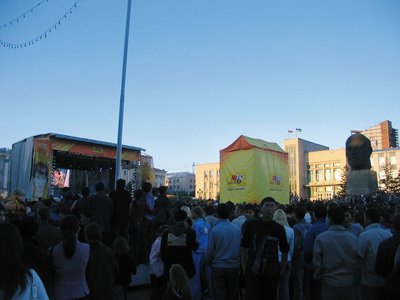 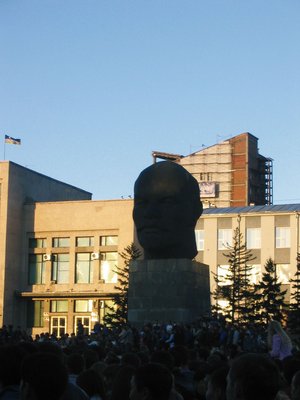 Yup, the main reason for my visit was a head. After the previous few weeks exploits and ongoing fascination with Lenin statues and their positionings (the guy that made them must have been in almost as bad state at the fall of communism as the guy who used to do the Gerry Adams voice overs), i couldn't really leave without seeing the head. Ulan-Ude's main kind of claim to fame is that it is home to the worlds largest Lenin head. I belive it beats the one in Llanfairpwllgwyngyllgogerychwyrndrobwllllantysiliogogogoch by a few cm's. Regardless, it is an impressive head. Slapped bang in the middle of the main City square, and at this moment with the base covered in concert goers, all looking not entirely unlike ants, or Dorothy in the Wizard of Oz, i fell in love. I should try and dig out some dimensions or something, but as i doubt many of you have a local Lenin head to measure with a tapemeasure for compariosn purposes, i won't bother.

I spent a happy evening listening to a surprisingly decent concert of Russian acts, enjoying the feel of the crowd and just gazing at the head. Even the discovery that we'd lost to Spurs, looked dire and were bottom after the opening of the Prem season couldn't shake my mood. The last band in particular were very good (and popular), although for the life of me i couldn't understand what the constant images of Gabby Batitsuta scoring for Argentina, which were being shown along with the singers head on the big screen, had to do with anything. 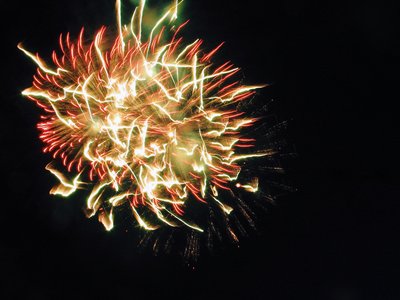 It was odd, but prior to the last band, standing there with the concert and head, i was suddenly struck by the desire that I wished I wasn't alone. I have no problem with solitude and being surrounded by foreigners who i can't really communicate with, and I'm generally a solo traveller - and have been for most of my travels - yet have enjoyed myself imensely. And yet all of a sudden i wished i could share the experience with somebody. I don't actually know whether i was craving a partner, friend or random travelling stranger (more of the later i think - somone like Gary or Shan from a previous trip, who kind of worked with my warped brain and i could bounce stuff off), but there was a hole there. I came to the obvious conclusion. I'm getting old.

And besides, i wasn't alone for long. For reasons which are complex, surreal and mostly unknown even now (and a very long story which will not be recounted here), within 20minutes i found myself on stage as a 'lucky' winner, in front of maybe 20000 people having to sing along to some random Russian track. Which everybody else in the entire city obviously knew. And i'd never even heard before. And the only words they could find were in Russian. Which is in Cyrillic. Which I can't read. You get the picture. It wasn't pretty, but i did somehow manage to escape without being stoned or pelted with rotten fruit, which i considered a near miracle.

Yes, i'm in love with an inanimate object. 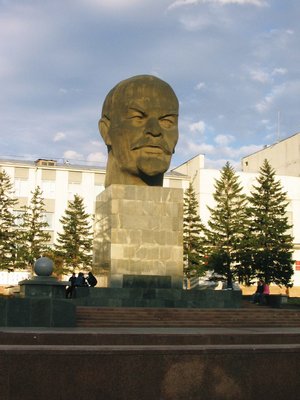 Posted by Gelli 23:45 Archived in Russia

Our Gelli is in love! and it's not a sheep!