In search of a womble. A specific one.

Some places you go to just because of the name. It is for this very reason that amongst many others, i have visited Hell (the road to Hell is a 7km long virtually straight downhill tunnel, if approaching from the East, anyhow), climbed Wank, and done the Fucking to Condom journey. And so it was that i just could not resist the temptation to visit another Womble.

I actually now have serious plans in the not too distant future to specifically travel and then write a book about visiting the Wombles. Just think of the places and extremes you would go to. It has to be done. I'm open to possible companions if anybody can say why they should accompany me. And if one of you steals me idea, a fate worse than picking up Rubbish awaits you.

If you have no idea what i'm talking about, this link may help explain...http://www.wombles.easyweb-solutions.co.uk/pages/fmain.htm

And so it was that i headed to Tomsk. I had planned to go straight through, but after a 16hour trip through to Novossibirsk, Russian beaurocracy and service got the better of me and after being shuttled between different ticket desks without ever finding the correct one, mean't i missed the connection, and by the time i found the bus station (not where my book said), i had just missed the last bus, and the only alternative was a minibus arriving at 1am and which would cost me an extorsionate 1000rbl (he'd seen a foreigner and trebbled the price). So i stayed the night. It was absolutely sweltering, and despite having had a shower, after going for a walk at 10.30, i was already drowning in sweat and as smelly as before within the hour. I also got to hear one of the very worst (but funny) bands i have heard in ages from the hotel window, and it took me a good 20mins to actually realise they were trying to play Pink Floyd songs..

After chickening out and hidding from a rain storm, i got the bus and made it Tomsk for 160rbl without incident except an interesting armed check point where guards came and wandered down the bus looking for whatever, but not checking papers. I tried to look Russian (or at least not Polish), and it seems to have worked.

Tomsk is an interesting place. The towns officials specifically wanted nothing to do with the Trans Sib when it was being built as they thought it would affect their trade monopoly on the Post Road. Sure, it did, but not in quite the way they were worried about, and by the time they realised this fact, it was too late. The tiny hamlet of Novo-Nikolayevsk (now Novossibirsk) which grew up just to house workers on the Ob bridge supplanted it, and Tomsk despite being relatively large still (about 500k), has a kind of strange off track backwater studenty feel - i think there are 6 universities, and a 5th of the population are students.

In terms of sights, the city is nice without being packed of must see's. Last year had been the cities 400th aniversary (celebrations cancelled due to Beslan), so allot of the buildings had been renovated, and money spent on new things which helped. There is a great Chekov statue, the inevitable Bangles song, Glorious leader statue and theme park (as in every single Russian town and city - it is a long held search to find one somewhere which doesn't have at least 2 of the 3. I figure there must be 1 town which they forgot about if nothing else), plus theatre and university buildings, plus some wonderful wooden buildings, although a number of these seem to now be falling into disprepair and several have apparently burnt down in suspicious circusmstances if they happened to be in prime locations...

I was staying with 2 HCers, the Pakulevs of Alyona and Evgeni, plus Nora a smaller than usual but still scarily friendly dog. Two lovely people and great hosts, and no problems despite Evgeni's lack of English and only basic German. Scarily, they had the most un-Russian appartment i had seen. It was all perfectly decorated, everything worked and was wired correctly and they even had running hot water, things i had begun to regard as vague memories. 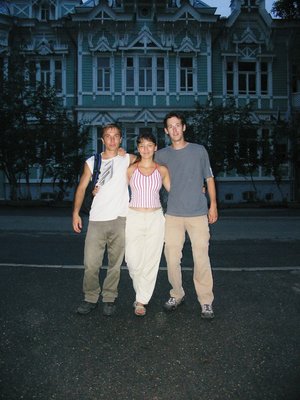 Evgeni, Alyona and me outside of one of the few remaining mint condition wooden buildings in the city

It is at this point that i must mention the biggest travesty of the entire trip. Neither Evgeni or Alyona, nor anybody else i was subsequently to meet in Tomsk had ever even heard of the Wombles. I kid you not. People in Tomsk have never heard of Tomsk http://www.pennyhapenny.com/catalog/images/harroptomsk.jpg

What could have been a huge tourist and money draw for them, and obviously should have been a huge statue in the town centre, the good people of the city had no knowledge of it's existence. Education. I am now on a crusade to educate. And if anybody can locate a large stuffed Womble (of course Tomsk would be best, but any would work), please please let me know. I have some friends that i need to send it to...

I know i waffle on lots and so this thing is a good dozen times longer thanb it needs to be, but as i've said before, nobody is forcing to you sleep in front of it. 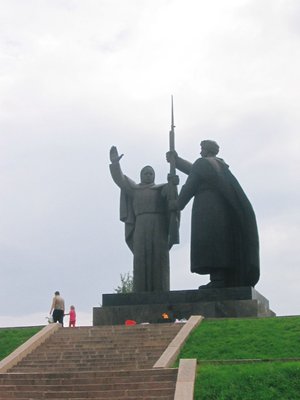 On the second day, it was Evgeni's birthday and as all the family were coming around, and none of them knew about HC, it could be hard to explain the presence of random foreigner, so it was agreed that i would disappear for a while whilst the family was entertained. I was going to wander off alone (in search of wombles, naturally), but Alyona had otehr ideas. And thus i met Albert (and his friend Marina), a businessman with Chinese interests who was a newly signed up HCer in and was more than happy to lose an evening showing a foreigner around, and practicing his English. We wandered around the city a bit, saw the founding stone of Tomsk, and the rebuilt Kremlin areas and some of the centre and after dinner at a strange aborignal place we retired to the Siberian pub. 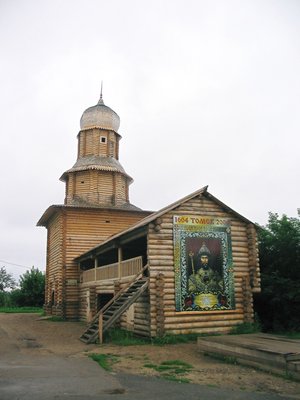 Now i don't want to give the wrong idea about the Siberian pub, but from the moment i entered teh door i sensed that my ideas of what a Siberian pub would be like would be a tad off the mark. I'm not sure if it was the obviosuly Siberian artefcats of a life sized Beefeater, pictures of Lady Di or framed front covers of the Telegraph and Times which gave it away first, but in fairness, the White Hart on days when the fire is off is more like my idea of a Siberian pub than the one in Siberia. oddly though, they had no British beer on draught.

The following day was the real birthday celebration for assorted friends and a good 20 or so crowded into the flat, including one poor chap in a wheel chair (only 2nd floor) after a climbing accident a couple of months previously. In normal fashion, i was again the only foreigner in a group that in general spoke little English, but it didn't bother me at all. It's strange how you become used to being at parties/gatherings where you can only really talk to a small number of the people there, and normally end up just sitting there listening to assorted converstations in foreign without having the faintest idea what's going on. I think that's actually part of the fun, as your imagination works away to try and work out what they might be saying, and add your own translations to it, whilst being carried along anyway. I actually now find it really strange to be at a party etc where everybody is speaking English and i understand everything. Most odd. Suffice to say, a great time was had by all, and i even managed to coax more English out of some later on as the numbers dwindled.

One otehr thing to add - to my list of fast food and beer munchies that i think should be brought into Western Europe as soon as possible (see earlier thoughts on the subject), i must add Russian beer snacks. These guys know all about drinking beer and have come up with a number of excellent (and cheap) altenatives to crisps and nuts, including calamres strings, dried anchovies and what are approximately fried flavoured croutons. None of that does them justice, but they are all damned good.

And to top it all off, Carlie and Steve gave birth to their second daughter, Jessica. Congrats all around.

Posted by Gelli 01:26 Archived in Russia

LOL... this quite tickled my fancy!
I had a stuffed version of Orinoco & a
Madame Cholet Cookbook:-)