Papa Lenin and the farmers in Tyumen (ТЮМЕНЬ)

From Tobolsk, I took a late afternoon train back to Tyumen on the main Trans-Sib route (pron Tooo-min or some such) on which i was the only passenger in the provodnika's carriage, so on discovering i was also foreign, decided that i was worthy of full attention and lots of free food and drin, although she spoke not a word of anything I did.

In Tyumen - a city of 600-700,000 which is on the Main trans-sib route so passed through by lots of tourists, but none have ever heard of it or stopped off - i was met by my welcoming committee of Masha, Susha and Kostya, although sadly without the promised welcome poster. Masha is a HC member who wasn't able to put me up, but had said we could meet and grab a drink and show me around and find me a hotel. And that very afternoon, via a complicated sms convo (thanks Vaida!) with my arrival time confirmed had suddenly found a friend (Kostya) who was happy for me to stay, although he subsequently found a friend of his who... but i'm getting ahead of myself as usual. Time is so constricting being linnear. Has anybody else ever felt that?

I spent a good 3 or 4 hours amazing them that my English was so good until it dawned on me - and as those of you who are aware of my mental prowess will know, this is not a quick process - that they thought i was actually Swedish. Doh! They were 3 wonderful people, and i felt instantly happy in Tyumen, which is kind of odd as it normally it takes me at least an hour or so to adjust to people i meet and feel fully comfortable with them.

Although i got there quite late, I was promised the grand tour, and got it, but for reasons and ways which will only really make any ind of sense at all to those who were there, it didn't really work like that. It's amazing how many jokes and how much fun can be made out of Russian Orthodox Churches, Aquariums with no fish, Knives in nightclubs, Beyond the river 1 and 2 (actual districts and postal addresses) and stunningly lit Tyumen versions of the Golden Gate Bridge which wasn't Golden or even lit. And some of the most amazing socks ever seen by mankind. And for me to make such a claim is heady stuff as anybody who has seen what i walk around T-Kartor in will know. These were serious socks.

It seems that it was only lit until 1am or the bulbs had been borrowed by somebody to light a fountain, or some such. Susha insisted she couldn't stay out late due to an iterview the next day, which we assumed was morning but later discovered was 4pm, which kind of killed that. After paying homage to Papa Lenin, unusually, in Tyumen he wasn't pointing or even with an arm outstretched, and finally getting Susha home (to this day, i have no idea how the interview went), we got a bottle of winewhich is of no relevance except that it came with its very own corkscrew, something none of us had seen before. Yes it broke the cork and didn't open the bottle, but even so. Progress is a wonderful thing.

We then took Masha back and got a taxi out to a lovely concrete block (about 4am) to the house of DJ Sasha, Tyumen's #1 club DJ, and another to add to my musical collection of the trip, who was the friend of Kostya who had indly offerd to put me up. The 3 of us had a couple of drinks, talked randomly and listened to a selection of his discs into the morning. As i've possibly noted before in the strange case of Juste's mother becoming vegetarian, HC (and CS) are scarily powerful tools/communities. Within 12-15 hours, the friend of a friend of a member who had never even heard of the HC previously was happily hosting a visiting foreigner. And it didn't even really seem strange.

The thing which to me was most noticeable about Tyumen (and this trend continued as i went further East) was the sheer number of Japanese cars in the streets with the steering wheel on the right - Russians are on the left - which seemed kind of odd, as its not as if Japanese firms don't make LHD versions. Why i always notice useless little cr*p like this and not relevant things like the huge s*d off pot hole i'm about to fall into (except in Tyumen which was astonishingly lacking in them), i don't really know.

The following day, after being adopted by yet another large and drooling dog - Masha's - and with Masha limping like mad and Kostya falling asleep, we went on a daylit tour. Again the bridge was not lit, the ocean had no water and the aquarium no fish, whilst Orthodox churhes continued to abound, the socks were different but of the same high standard, the famous balcony was viewed from inside after the previous nights out (that no church was visable was dissapointing), and we took a 2 hour trip to try and find a huge anchor which we never found and which neither Kostya or I believe ever really existed. The one thing of note about Tyumen in the book i had - 2 huge pipelines going through the town - was also conspicuously absent, but i again got the Bangles going through my head, and got to see the very first stone laid in the town (although they seem to have forgotten to build the rest of the building around it, so it wasn't really a helpful stone), Siberia's first ever settlement. Just the idea of Siberia has mean't so much to so many and caused untold suffering and deaths that to visit the place where it actually started (as Russian Siberia - obvioulsy the land existed beforehand) and one which was just kind of there instead of covered in tourists or having a big deal made over it, like Auschwitz, was strangley moving. 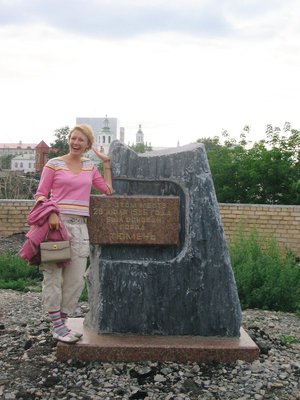 Masha with the first stone, literally the building block, for Siberia

Tyumen's other claim to fame is that this is the town where the glorious leader Lenin's body was hidden during the war so that the German's couldn't get hold of it. I admit i hadn't realised that the entire WW2 was a smoke screen for Hitler to get hold of Lenin's body, but it wouldn't really surprise me. So for many years, randomly, enin lay in a classroom in the basement of the Tyumen Agricultural Institute. I don't know why that idea amused me, but i must admit i can't really see Maggie Thatcher's body being secretly moved and then cared for by a team of experts in the Bridlington farmers institute during WW3...

I would also speak about our plans for Tyumen's future rise to tourist superstardom, an idea for the begining of a huge postcard market and an incredibly stunning plan for a Lenin Statue in odd positions exhibition (with an afro/mohican, on the toilet, standing on his head, doing the riverdance and in Karma-Sutra positions amongst others), but we have fortunes to made before i can spill the plans and besides, the chances of any of you having even the faintest idea wtf i'm going on about is remote. So i won't. 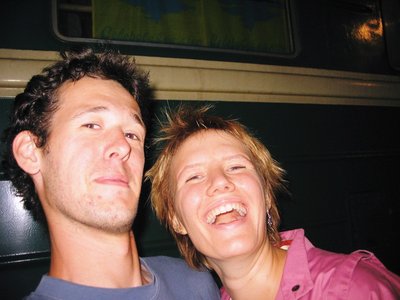 Me and Masha at the station. Scarily, neither of us had touched alcohol in a good 20 hours, although there`s no way you could tell!

Posted by Gelli 00:38 Archived in Russia