My arse, U2 without relevance to Bono and a trip to Tobolsk

And so in normal fashion, after a couple of weeks of frustration at plans constantly failing in Chelyabinsk, on the very last day, it started to work. So it was that we (just) got the morning train down to Miass, and then a minibus to Turgayak.

Turgayak is a wonderfully sited Lake, kind of a mini Baikal, situated a couple of hours Sth-ish of Chelyabinsk, and which we had been trying to get to for a while, and had twice had the chance ended at short notice. I used the opportunity to do as little as possible except doze, relax in the sun and soak up the scenery. On the shores was a Kids camp where Zhenya's mother was working for a couple of weeks in the summer, and because of some odd laws, the presence of guests of staff members was strictly prohibited, meaning a bit of sneaking around, although my departure mean't i missed the fun of the night where apparently Mjeh and Evgenia were playing hide and seek with guards and climbing through windows. 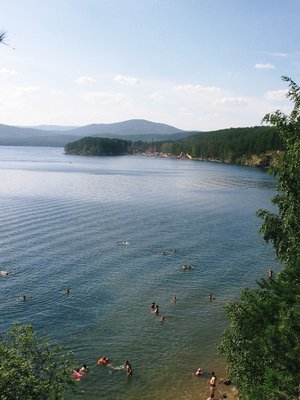 That night - sadly missing Miass town itself due to time constraints - i went overnight back to Ekaterinburg, via a journey which seemed to consist solidly of people suddenly getting a moment of near Euphoria at the discovery of a foreigner amongst them. Not only was it a chance for people to have their photo taken with a a foreigenr (i don't understand either) and practice English - in some cases well, in some very badly - but i was the obvious person to be showered with marriage proposals (3, i think), alcohol, offers of animals (no sheep, alas) and use of peoples homes. Or at least i think so anyway.

Ekaterinburg is the first nmajor city in Asian Russia and one of the largest in the country, and has 3 main claims to fame. It is the birth place and home of Boris Yeltsin; It was here that the last Russian Royal family, the Romanovs, was murdered in 1918, hence ushering in Communism and the glorious reign of Uncle Vlad [the assassinations were ordered by Colnel Swerdlov, and it was in honour of this fact that the city was named Swerdlovsk in Soviet times] and it was near here that Gary Powers U2 spyplane was shot down during the middle of the Cold War, an incident which almost got extremely nasty.

Part of that reason was Powers suddenly deciding that he didn't want to die for the CIA/US after all, and parachuting out of the plane without hitting destruct in case he killed himself, despite being ordered to kill himself with poison and destroy the plane rather than let it fall into Soviet hands. Powers was captured and the wreckage recovered, and even his photos developed. There's a musueum, but the evil old hag working the reception refused to let me in, probably as i was a stupid foreigner.

The city is nice without being special or overflowing in sights, although there is the river, a nice central area with waterfalls, a couple of lovely churches, which i wandered around. Dodged a rain storm in an Irish pub where i had a pint of some strange English thing i've never heard of before and hope never to again, looked bemused at the utterly unguarded twin UK/US consulate, took in the inevitable Lenin head and couldn't really be bothered with the walk to the UPI building, promising though it looked from a distance. One cutrious thing i noted was the sheer number of people wearing England football tops - national as oppsoed to real - of assorted styles, including some which are unlikely to be even vaguely authentic (i don't, for example, remember Rooney or England playing a game whilst wearing an orange shirt with a pink stripe on it). 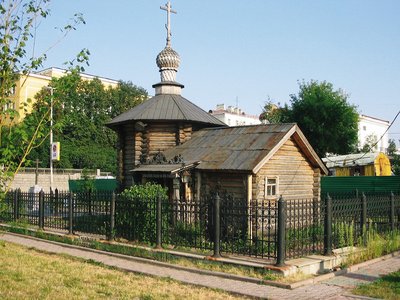 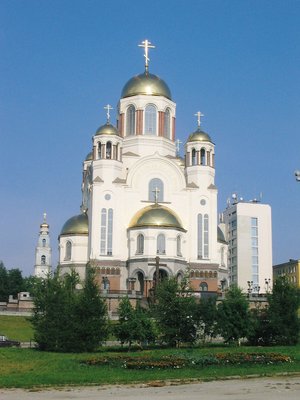 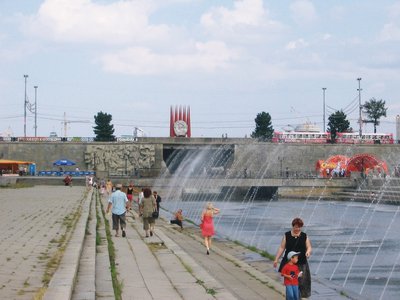 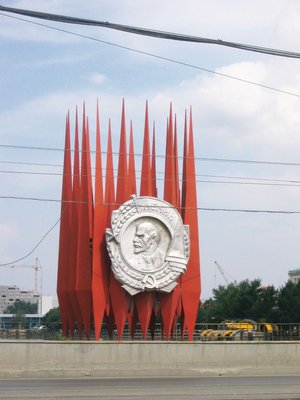 Assorted parts of Ekaterinburg, including the Romanov memorial and adjacent church

As some of you know, i periodically visit places for no apparent reason except on sudden irrational urges. And so it was that i took an overnight train to Tobolsk. It merited half a paragraph in the guide book i had, and didn't even have a Cyrillic translation of the name. But i had to go. One of the oldest towns in Siberia (1587, i think) and its former capital, its about 4 hours North of the Trans Siberian route in total wilderness and well off the tourist trail.
The journey was notible mainly for being given a large package of food and bottle of water for free (so was everybody else) and then a second free meal for no apparent reason (just me) by the train staff, something which i've never seen before, and uniquely, even the sheets were free.

I arrived at the most obviously communist station i think i've ever seen, in the middle of a forest, with no sign of any dwelling or town at all. After finally managing to leave my bag in a loacker (during which i was interogated by police, had my bag searched [very badly] for bombs - i have no problem with security, but i would guess that terrorists probably have more high profile targets that Tobolsk station. And guessing people normally put bombs in the middle or bottom of the bag, not the top - my passport scrutinised by 5 people and talked 2 hours to 1 policeman whilst he showed off his English [2 words - Amerrrica and Football] and waved a large gun in my direction) i left the station and started walking. An hour later, and only then passing a sign saying Tobolsk 10, i gave in and got a bus.

Buses in Tobolsk are of the "wholly cow how the heck is it still in one piece variety", with sticy tape and empty water bottles used to hold things open, plus holes much in evidence. They all look like they should collapse by just being breathed at, let alone touched. They have the interesting ability to not be able to go uphill at more than 3kph (no joke) or downhill at more than 3kph (brakes are so bad that theres no way of stopping), but as is my way, i digress.

When i am on a bus and arriuving in a aplace i have no idea where i'm going, i either alight at somewhere which looks interesting, or when everybody else does. I choose the later strategy in this case, and quickly discovered it to be the wrong choice. It was actually quite interesting to see the estate that i had been dumped into. Huge wide boulevards, and literally hundreds of identical concrete appartment blocks, but at this point i was begining to wonder if i had made a horrible mistake in following my urges. After all, my urges have got me in to plenty of trouble before, and thinking about it now, have come off even less rarely than the law of averages says that they should.

But after picking a direction at random and continuing to walk - and hoping like heck i'd be able to work out where my return bus left from - another 30mins or so, i suddenly saw a road sign, randomly in English as well as Russian, directing me towards the Kremlin which i followed, and eventually arrived at.

Tobolsk kremlin, i discovered is on the end of a large plateau (of which i had just crossed) and had answered the query i had about where the heck is the big hill i had been reading about. As with every other religious building in Russia, it is currently being renovated, but unlike most, people were at least working on it, and despite that is very picturesque. All the signs are in English as well (an oddly unepected bonus, and i didn't see a single non Russian tourist, and not many of them) so you can get some idea of what is going on. The view from the top over the old town and plains below is great. 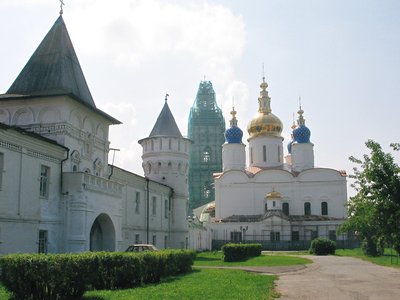 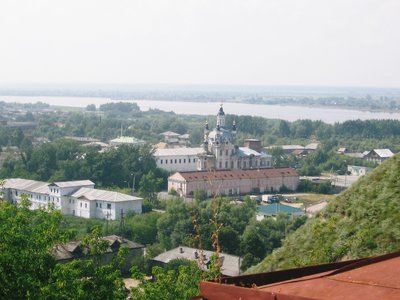 Tobolsk Kremlin, and view off the Plateau from the Kremlin over the old city

I spent a good few hours just wandering aroubnd, sweating like a pig in stupendous heat, killing mozzies at a great rate and admiring the views, before paying a visit to Yermak (the founder of Siberia) and then trouping down the hill to wander around the old town, which has some wonderful old wooden buildings, but sadly has that 'decaying but theres nothing we can do so we'll let it decay' feel to it, with many of the buildings in a poor state of repair. On the plus point, when the City expanded rapidly in the 20th century, to their credit they left the Old Town and plains alone, insetad building the vast concrete estate on the plateau previously mentioned. Which means at least that the Old town in its higgledy piggeldy way and wooden building area does have hope to be restored in the future, although i have my doubts. I hid from the customary afternoon downpour in the Swedish gate where I got talking (sort of) to a group of Tajiks, who keenly offerd to host me the next time i happened to be passing through Dushanbe... 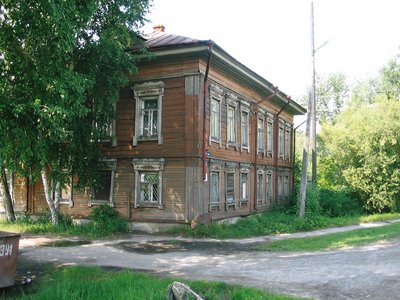 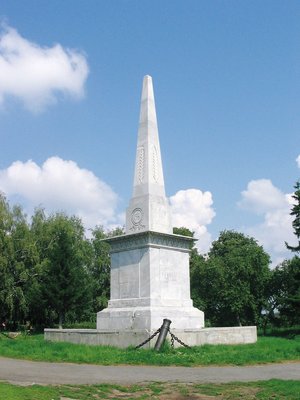 Typical style old wooden house, as found all across Siberia, and the statue of the founder of Siberia, Yermak

Posted by Gelli 23:22 Archived in Russia