And so, *sigh*, back to the daily grind

I've now been back pretending to be a real human being for a couple of weeks.

I love being back at work, the stability, normality, effort and office life is brilliant. I have now totally got the travelling bug out of me, and intend to now buy a house and even some furniture, find a girl, have a bunch of kids and settle down for gooo.... Aw heck. Who am I kidding. Don't be stupid. Sorry, boss, but of course i'm not over it. The problem with travelling (for many of us) is that instead of ticking places off your list, you with each journey you might loose one or two, but you'll gain a whole chunk of new places. I miss the life. The travel. The meetings and incidental occurences. The people. The food. So many great people, memories, and experiences. I've had time to reflect on everything that has been, and also attempt to rejoin the productive (well not really, but it's possible that my boss is reading this) work force. It's very strange being back. Certain things I really shouldn't still recall or know, I do. Some things I still seem to know better than some of my colleagues, even though I haven't looked at it in 15months. Other really simple things I have no idea what to do.

It will be a steep (re)learning curve.

It could be worse. I have returned in the middle of what is so far (and looks like continuing to be) is a glorious Swedish summer, and for those of you who all believe Sweden to be a cold miserable place most of the year, I can inform you that there are very few things better than good Swedish summers. The town is alive (for 10months each year, you see livelier ghost towns), there are people everywhere and the feeling is good. As is traditional, 80% of the population is off work at the same time, and all are taking 4 or 5 consecutive weeks. Work isn't piled as high as when i left right now, so i have time to readjust, whilst the beer is flowing, the beach is not far away, and the girls are all stunning and scantily clad, as is the way of summer.

I'm still homeless. In 2 weeks, i've stayed at 6 different places. And that will surely rise (thank you all) as immediate prospects aren't looking amazing. If anybody knows of somewhere (small-ish apartment or room in a house) in Kristianstad or NE Skåne, please let me know!

Kristianstadsdagener are also now over for another year. For those unfamiliar with the custom, basically for a week (read: 9 days) each town in Sweden has a summer festival, whereby booze is easy to get everywhere, and they sell it on the streets. Hoards of people descend on the town to enjoy the revelries, whilst numerous events and concerts keep people entertained. It's a great week in some ways, astonishing in others (you really can't believe that it is the same place in autumn, winter or spring), scary in yet more (Scandinavian prices again. Holy cow. A conservative and easy going week cost almost as much as a months travel!). And now it's back to the grind.

As a way of dropping in slowly, and taking advantage of summer and certain offers, I'm wandering around a bit, and trying to avoid sitting here glumly all the time. I've already met glorious TP leader Pete and his lovely wife Janelle in Copenhagen, and have trips planned to Lund, Varberg, Ven, Ystad, Helsingborg, Gothenburg and Åhus in Sweden, plus Bornholm and Copenhagen (again) in Denmark in the next few weeks. Plus a trip to Norway, Stockholm, one to Poland, and a longer trip back to the UK and Ireland. So many people to see, places to visit and things to do. And some work stuff and trips as well. And of course I'm pondering the next big one, the when, where and how of which is still formulating.

For that, you'll just have to wait and see.

But It isn't the end. Oh no. It's just a break between books. And the next one will be the most exciting, complex and longest yet. 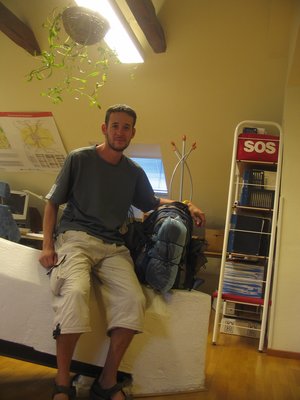 Me with my pack, back in the office in Kristianstad, Sweden. 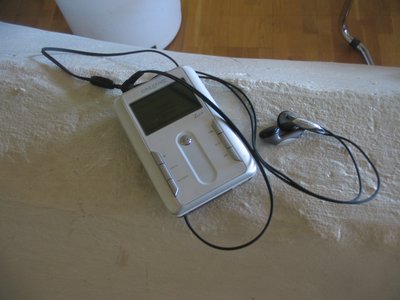 My famous possessed MP3 player, a Creative Zen 40gb, as previously noted with it's own sense of humour, irony and brilliant timing. Without it, I doubt I'd have survived the trip 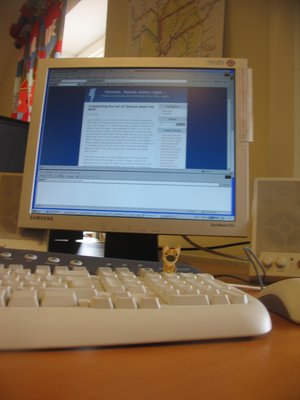 And Clive even made it back to! Yes, I am aware that a good 99%+ of readers will have no idea who the heck Clive is, or what is such an achievement. In fairness, I should probably have introduced him last year from Hong Kong, instead of waiting until I got back and it was all over. But I didn't.

Posted by Gelli 06:45 Archived in Sweden

Hi there Rich, it was good to (finally) get to see you! I hope that you got to actually see some beach handball and that you didn't have to walk all way back to Kristianstad

Hopefully, you'll make it to Lund too eventually! //Susanna